Model Railways: Layout Content from the guide to life, the universe and everything 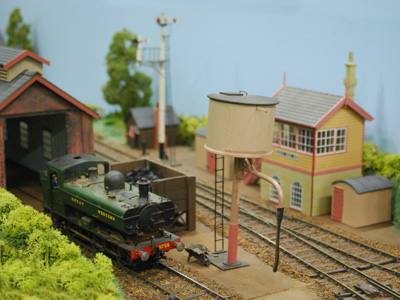 A common way to begin your model railway is to buy a 00 or H0 scale 'Train Set', typically from companies such as Hornby or Bachmann. Despite the name, these are not cheap battery-powered toys but are a model railway starter-kit. They are often sophisticated, highly detailed models of a range of types of locomotive with authentic rolling stock. A standard 'Train Set' normally consists of:

Having decided what scale to use for your model, you then need to decide where to put it.

The first place a layout is attempted is often a bedroom or living room floor. This is a bad idea; dust and fluff will inevitably gather in the motor and gears of the engine and fluff will wrap itself around wheels.

Another disadvantage of using the floor as a location for a layout is that the floor space will inevitably be needed later on, meaning that the track, rolling stock and scenery will need to be packed away, and set back up again the next time it is required. This is a problem for two reasons. It is not merely laborious, but also track joints, called 'fishplates', on model track are quite fragile. They can only withstand being joined and undone a certain number of times. Some of the more complicated sections of trackwork itself, such as a double slip2, are fragile also.

The second most common place for a layout to be attempted is a table, often the one on which meals are eaten as it is likely to be the largest one in the house. This has the disadvantage of needing to be cleared for meals, but avoids the problems with dust and fluff. Also, there is a significantly lower risk of your expensive model being trodden on.

Finally, the ideal location for a model railway layout is a baseboard provided specifically for the purpose of constructing a layout. This need not be anything more complex than a large, preferably wooden, dining table, provided it can support a reasonable weight. If you can stand on it without it breaking, it's likely to be strong enough to use as a base.

If you're feeling particularly enthusiastic, you can purpose-build a baseboard. The main advantage over the dining table approach is that track is more easily attached to soft wood, such as cork, than to the wood, such as oak, that might be used in a standard table. Also, if you build your own baseboard, you can tailor it to suit your intended layout. If you have to drill holes in the base, for signals or wires, say, it is much easier to work up the courage to drill or cut through your own work than it is to damage the beautiful finish on a dining table.

Keeping Track of your Track

After you have decided the location of your model railway, you are probably impatient to get track laid and start running trains. However, unless you are planning on staying content with a very basic layout such as an oval, the next step, that of track laying and wiring, requires concentration and should not be rushed.

Plan a Track to Suit

If you are planning an adventurous and complex layout with which to amaze your friends, before you set up your track and fix it to the board you need to ensure that your track plan will work. It is recommended that you consider buying either a model railway design program for the computer (such as Hornby Virtual Railway; others are available) or a set of track pieces in a smaller scale than you want to model (for example ¼ scale). That way you can mess about and come up with various designs to see what will work best, without the risk of damaging your track. As it is unlikely that you will already have all the track you need for your layout, thorough planning will mean that you know exactly which pieces of track you need to obtain.

Laying Out the Layout

Once you have decided on the design of track, called a layout, that you are going to use, and have obtained the pieces you are going to need, the next step is to lay out your track temporarily on the board and draw around the outside of the track. Keep a distance of at least 1cm from the end of the sleepers (the horizontal planks at right angles to the rails that the rails rest on). Then, you should use this outline to cut out the shape from some cork sheet. You can use cork floor tiles as a relatively inexpensive way of obtaining this cork sheet, as they are readily available for sound insulation purposes. After you have cut out the cork, lay it on the baseboard exactly where the track is going to go, and then glue it down using cork tile adhesive. Let this dry overnight.

If you have been following the above instructions, you should by now have a board with some cork (hopefully with at least one electrical connection to the controller). The next thing to be done is to decide, depending on your design, whether you would like electrically or manually operated points. Electrically operated points add another layer of realism to a layout, but require more work.

There are two main types of point motors - solenoids and rotary-motored 'slow-action' types. For a beginner's model railway, solenoids are probably best; they are usually cheaper, easier to wire up, and often more reliable. Also, most types of pre-built model railway points are ready to have solenoid point motors fitted. In fact, some, though sadly not many, points are available with motors already fitted integrally in the track base. To operate a solenoid point motor, you need a 'Passing Contact Switch'3 and a different power supply to the one used to power your track.

There are a different ways of attaching motors to points: the first involves cutting a slot in the baseboard, and mounting the motor underneath. There is a hole in the points' tiebars4 used for attaching a solenoid point motor to the set of points. To fit a point motor in this way, you need to cut a slot underneath that hole, so that whichever way the points are set, the hole can be seen from underneath the baseboard. This cutting is easiest to do before the track is laid permanently. Then, after smoothing the underside of the baseboard, attach the point motor in the way specified by the manufacturer, with the thin bar of the motor placed through the slot in the baseboard and the hole in the tiebar. Wire it up, also following the manufacturer's instructions, and you should have a remote-controlled set of points.

Another way in which it is possible to use a point motor is mounting it on top of the baseboard. Some point motors can be fitted into baseplates to allow them to be screwed to the baseboard surface, with a piece of scenery on top to disguise the motor. If you choose this method, there is often a bar protruding from the baseplate, with a hole in one end, and which moves slightly back and forth. After locating the small raised peg on the end of the tiebar into this hole, move the tiebar to the route setting where it is furthest from the motor baseplate, and move the baseplate as far as possible from the set of points while still attached. Then it will be in the correct position to be screwed to the baseboard. Once it has been secured in place, attach the point motor to the baseplate and wire it up. Then, after testing that it works, you can disguise it with a small hut, signal box or maybe a freight container. 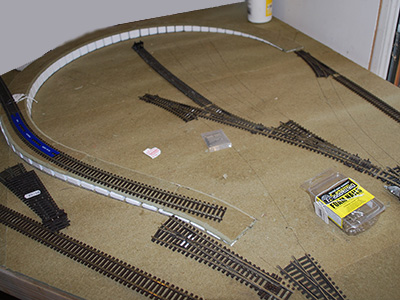 It is finally time for the tracklaying to begin! If you have bought rigid, pre-formed pieces of track, known as 'Setrack' as it comes in set shapes and sizes, you will find that every so often along the track there are small holes in the centre of the sleepers. These are for use in pinning down the track. If, instead, you have bought long lengths of bendy track that does not stay in a straight line for long, you have bought 'Flexitrack', which normally has no holes in the sleepers for fixing. This means that you will need to drill your own holes, in about every twentieth sleeper, for track pins.

Reassemble your track layout on top of the cork, making sure that you centre it on the cork as much as possible. Then, when you have completed setting up the track, you can start pinning it down. Use specially-made model railway track pins, as these are designed to fit in the holes in Setrack. Do not use a normal household hammer, as if you do, you are likely to severely damage your track. Instead, use a small tack hammer; this will fit between the rails, enabling the pin head to be hit into place until it is flush with the top of the sleepers.

Be extra careful around points. Although there is a hole in what appears to be a sleeper in almost every set of model railway points, this is not a pin hole. Instead, as mentioned above, it exists for ease of adding point motors. It is vital that this piece of the point is free to move.

Before anything else, it is important that you test your track after you have laid it. Connect your controller to the track5, plug it into a socket, switch it on and start testing.

Now that it has been laid, remember to clean the track frequently. It may be boring, but it is easier to do it little and often than to have to attack the whole track with a sander7 every six months.

1230V AC in most of the world, including Britain, Europe and Australia, 110V in North America and Japan.2A double slip is like an x-shaped or diamond crossing, on which it is possible for a train to either pass over or change routes.3These provide a short burst of current when operated.4The tiebar is so called because it ties the two rails together, ensuring they move at the same time.5The required method of doing this is usually shown in the instruction manual.6So gravel has been placed between the sleepers of the railway to increase stability.7Otherwise known as a track rubber.