Model Railways: Scales and Gauges Content from the guide to life, the universe and everything 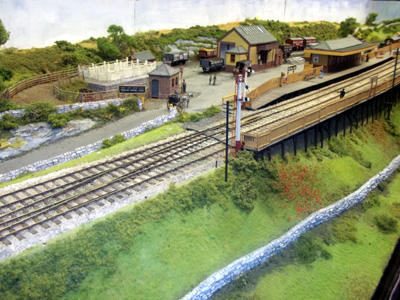 When planning on making a model railway, first you need to decide what scale you're going to work in. This will likely be decided on the basis of your funds and space available, although occasionally a model of a certain class of locomotive or a particularly good rendition of a building can be the inspiration for working in a set scale.

Most models are electrically powered, although in larger scales, models of steam locomotives can be powered by 'live steam', with coal boiling water and steam driving wheels via pistons and connecting rods. Although it is possible to buy 00 Gauge live steam models of classic steam locomotives, the cost of such a loco is beyond most modellers' pockets as extra equipment is needed in addition to the locomotive. Diesel locomotives powered by internal diesel engines are also available in the larger scales.

The gauge of a railway is the distance between the two rails, from inner head to inner head1. British standard gauge is 4 feet 8½ inches (1435mm), a measurement based on the traditional width of a horse-drawn wagon and required by law by the 1846 Railway Regulation (Gauge) Act. Most countries have adopted British standard gauge to allow trains to all use the same tracks, but there are countries with different gauges - for example, in Ireland 1600mm gauge (5ft 3in) is used. Some countries and many private railways use track that is smaller (and cheaper) than standard gauge - such lines are known as narrow-gauge railways.

A model railway's scale is the model's size when compared to the full-sized engine and/or track. Although most model railways are based on standard gauge layouts, modelling narrow-gauge railways is becoming increasingly popular. For instance, with a 16.5mm gauge track, if you use the track as a standard gauge railway, your layout is modelled on the principle that the gap between the rails is 4 feet 8½ inches (1435mm), and everything on your railway would be an 87th of the real size. However, if you use the same track as a narrow-gauge railway, you can model on the principle that the same gap is, for instance, now 2 feet, and subsequently run much larger models (only a 36th of the real size) on the same size track.

In the world of model railways the terms 'gauge' and 'scale' are often used interchangeably.

H0 scale is the global standard for mid-range model sizes (smaller than 0 but larger than N scale), but it is almost unknown in the UK where 00 gauge dominates, except for models of foreign locations and rolling stock.

If you are just starting out in the world of model railway building in Britain, it is recommended that you start in the dominant and widespread 00, pronounced 'double-o', scale. The widest range of models and kits are available in this size, which is generally considered a pleasing scale to work with. It is not too fiddly, not horrendously expensive and easy to collect a wide range of rolling stock and scenery for, as all major model railway manufacturers construct railways in this size. Decent layouts can be set up even for railway modellers with restricted space. Another reason for this scale's dominance is that it was created in 1921 by German toymaker Bing and has been the standard size for Britain's dominant model railway manufacturer, Hornby, since 1938.

Just as there is an advantage for real life railways to all use the same track gauge, it is also an advantage in the modelling world, so 00 scale uses track with the same gauge as H0 scale (16.5mm). However, 00 scale is slightly larger (and hence less accurate) than H0 scale. This is because British trains were traditionally smaller than their continental counterparts. Rather than trying to make smaller motors to fit into models of British engines, the models were made to a slightly larger scale so that the existing motors could fit. 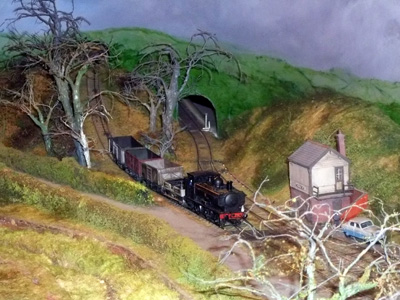 A brief list of the major popular gauges for railway modelling:

Since model railways were first introduced, two trends have affected model railway scales and gauges. Model railways have become increasingly accurate. They have also become smaller as the technology to make smaller and smaller railways have developed. One side effect of this is that the large scales in which models have traditionally been built, including gauges 2 and 3, are no longer as popular as they once were. At the other end of the spectrum, there are people pushing the boundaries of miniaturisation - a model of a Model Railway has been created and several other teeny tiny Model Railways have also been built.

1As rails are normally T-shaped to prevent derailing, it is the distance between the inside of the top of each T.2Also known as RTR, ready-to-run model railways require no assembly before use.300 wheels are technically not quite to scale. They are a bit bigger than they would be on an exact scale model, in order to help keep the model on the track.