Model Railways: Baseboard Locations Content from the guide to life, the universe and everything 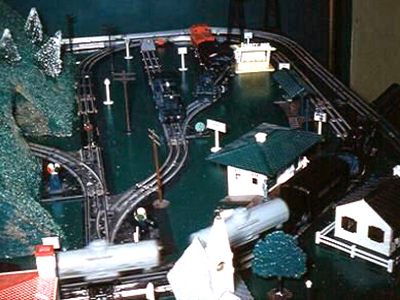 One of the first difficulties encountered when creating a model railway is where to place the baseboard. The major objection to a project is often 'I don't have room for a train layout.' Some model railways have been built small enough that they fit neatly into a briefcase1; there are others that fill a large warehouse. Your best solution is probably somewhere in between.

Often a corner can be found in a spare room, garage, basement, or even the attic. If you can manage this feat you will have the ideal situation, but you must make a strict rule that nothing is placed on your baseboard that is not part of the layout. There is a temptation to place items in a small clear area for 'just a minute'; if you allow this, your railway will soon become covered with junk and ruined.

Out of Sight, but Ready to Run

There are several creative ways to build a layout that takes up very little space, except for when it in use. One idea that is commonly used is to build a box with low sides and fit it with either castors or sliding rails like a bureau drawer; it can then be stored under the bed between runs.

Another solution is to build a cabinet fastened to a wall. This can contain narrow shelves for your rolling stock, locomotives and other items that are not fastened securely to the baseboard. The front door of the cabinet will support your baseboard, which should be attached to the door with just enough space underneath it for the electrical wiring to be hidden. The door should have a hinge along its bottom edge, and when it is lowered, the front edge should be supported by a pair of folding legs. Be sure to remove all of the loose items from the baseboard before closing the door.

The other possibility is to hang the entire baseboard from the ceiling with a system of cables and pulleys that allows it to be hoisted out of the way when not in use. This takes a little thought to arrange things so the table remains level while it is raised and lowered.

Some railways have been built on shelves that run around a room above the top of the doors and windows. They can either be supported by shelf brackets mounted to the walls or hung by rods from the ceiling. Several rooms can be included if you cut small 'tunnels' through the walls (although this is not recommended if you are in a rental property).

There is also the option of building your railway outdoors in the garden. These layouts are usually the larger scales, as natural debris such as dirt and leaves will interfere more as the scale is reduced. For someone who is also interested in plants this can be a very good option as most of the scenery can be live vegetation. The actual construction of the layout differs from building indoors, but there are many information sources available to guide you.

Another possibility is to join a model railway club or association. For a monthly subscription you will be able to use their facilities and participate in the development of the club's layout. Many clubs exist, and each should have one or more scales available; some use larger scales in the foreground with smaller scales near the rear of the layout to give a sense of perspective. Each club will have a different theme, so you should visit several before making a commitment.

If you want to become involved in model railways there are many possibilities, and we're sure there will be at least one of them that can meet your needs.

1Or even smaller than that - a model of a Model Railway has been created and several teeny tiny Model Railways have also been built.