Shot Put Content from the guide to life, the universe and everything 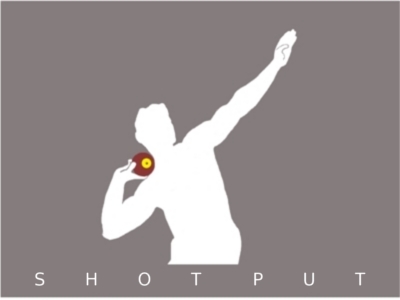 The shot put is one of the eight Olympic field events.

At first appearance, this sport is simply throwing a heavy ball as far as you can. However, it actually requires a complex blend of balance, coordination and sheer strength. The difficulty is so great that it is one of the ten sports that make up the decathlon. The ball is known as a 'shot' and can weigh up to 7.26 kilograms (16 lb) for male competitors. The shot is normally made out stainless steel, but iron, lead or a mixture of synthetic materials are all used. The throw is actually known as a 'put', hence 'shot put' and 'putting the shot', but most commentators will refer to throwing.

There are actually two methods that are used in shot putting. These are the glide and the spin. They are used in different circumstances and have different benefits and flaws. The best distances recognised by the different shot put international bodies are generated by the spin, but all beginners to shot put will learn the glide method.

The following is a basic step-by-step description for the glide method of launching the shot. There are small alterations that can be used by the individual athlete, as best suits their body's proportions and strength. This method is reasonably easy to gain a basic level of skill with, while keeping a suitable level of safety. The instructions are for a right-handed thrower. If you are left-handed, change accordingly.

This method utilises your legs and hips to impart all your body's natural power into your arms and the throw. In effect, the power flows upwards: legs, hips, back, arms. The glide technique was used by Ulf Timmermann, who holds the current Olympic record at 22.47m. He has also put the shot over 23m with the glide method.

While the glide is relatively safe for beginners, it can be dangerous when achieving record-breaking throws; incorrect posture during the glide can place pressure in the wrong places throughout the body, potentially causing joint damage.

Next is a step by step guide for the spin technique. A harder method than the glide to learn, it is more suitable for some people. Those who are taller, with longer legs and arms, are normally able to impart more power using this method. Despite that, competitors ranging between 1.8 and 2.3 metres in height have won international events.

This method can provide more power to an athlete, but risks a higher chance of fouling (falling out the circle is very common when learning the technique), and also of injury caused by straining the body while twisting round.

There was, unfortunately, no competition in the Ancient Olympics that involved throwing a stone or shot. However, throwing stones by hand, when no sling of any form is available, has been a weapon of desperation for millennia, and indeed, still is today. This makes it likely that informal competitions have taken place for many thousands of years.

The first recorded example of any competition similar to the Olympic shot put was in the Middle Ages, when men would throw cannonballs. Given that there were many types of cannon at the time, it is entirely possible that shots weighing far more than 7.26 kilograms were thrown. While the Middle Ages range from the 5th to 15th Centuries by some estimates, cannon would only really be present from the 13th Century onwards, so the forbears of the shot put must date from this time at the earliest.

Shot put has been a part of the modern Olympics since their very beginning. Earlier competitions are believed to have taken place in Scotland from the 19th Century, predating the recommencement of the Olympics.

The material that a shot put has been made out of has changed over the last couple of thousand years. To start with, when simply a test to see how far it could be thrown as a weapon, stone would have been the standard material. Then the material would have changed to that of a cannonball - this could have been one of several materials in the 13th Century, as the exact materials and methods of a cannon were subject to extreme change depending on the builder. This could mean iron or lead or some other material.

The first competitor to use the spin method, rather than the glide, was Aleksandr Baryshnikov from the USSR. The method, invented by his coach Viktor Alexeyev, won him his first USSR record. He was also the first shot putter to cross the 22m mark. Despite taking silver and bronze medals, he never achieved his target of a gold medal in shot put.

Randy Barnes currently holds the world record for outside shot put. The record stands at 23.12m, and was set in 1990. However, Randy has been banned from competitions twice, once for 27 months in 1990 for taking anabolic steroids, and then again in 1998 for a particular anabolic steroid, androsten, at which stage he was banned from the Olympic games permanently. His record remains two decades after it was set, despite the controversy over his history.

Natalya Lisovskaya holds the four longest female throws for shot put. However, there have been frequent calls for her results to be expunged, detractors saying that her throws were taken under the influence of steroids. Her longest throw is 22.63m. She is married to Yuriy Sedykh, who holds a record in hammer throwing.

Neither of the current Olympic champions is the overall holder of the world records. Tomasz Majewski threw 21.51m and Valerie Kasanita Adams threw 20.56m in the 2008 Olympics, 1.6m and 2.1m less than the world records. These throws show that there can be great variations in the distances achieved each year. Even the same competitor can have throws differing by a couple of metres within each individual competition, let alone each four-year period.

The current British record holders for men and women are Carl Myerscough (21.92m) and Judith Oakes (19.36m). Carl is well over two metres tall, an evident benefit for the shot put. However in a competition in 1999, he breached the drugs rules and was banned for life from the Olympics - a costly loss since his record would have placed him as a gold medallist. Judith Oakes has held her record for an astonishing 23 years now - there appears to be a lack of British shot putters capable of competing at the highest of levels.

A Couple of Eclectic Shots

1Though evidently, it is quite hard to use most body parts to throw heavy objects.2As before, the method described is for right-handed throwers.3Counterclockwise.