How to Skim Stones Content from the guide to life, the universe and everything 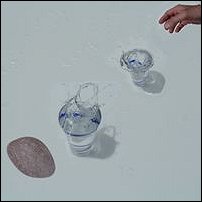 'Skimming' a stone involves throwing it into a body of water in such a way that it bounces across the surface several times before sinking, leaving a trail of expanding ripples. The aim, if there can be said to be one, is to make the stone bounce as many times as possible.

This pastime is also known as 'Ducks and Drakes', for reasons which should be obvious to anyone who has seen the ripple-pattern left by a water-fowl 'running' across the surface of a pond as it takes off1.

How to Skim a Stone

There is nothing quite so satisfying as the feeling derived from hurling a small lump of rock at a big puddle and watching it bounce repeatedly. While males seem genetically predisposed to enjoy this more (with both the pleasure derived and the urge to pass the ability on increasing in direct proportion to age), in rare cases it has been known for females to partake also.

This needs to be around the size of the palm of your hand. It should be heavy enough to be immune to breezes and turbulence, but light enough that you can throw it accurately and without difficulty. The pebble should also be as smooth as possible and an oval shape, rather than jagged or spherical. Rather conveniently, this is exactly the shape that water tends to wear pebbles into.

This must be as calm as possible. For this reason, inland lakes are usually preferable to rivers, streams or seas. There is nothing worse than watching your perfect pitch hit a slight wave and bounce straight up in the air before plunging vertically down into the water.

Otherwise, your only requirement is that the body of water be large enough that the stone does not reach the far side. 'It would have bounced 20 times if it hadn't reached the far side of the pond' is the skimmer's equivalent of the fisherman's 'It was this big, but it got away'.

The throwing motion you will need to adopt involves the stone hitting the water at the flattest possible angle. Therefore you will need to throw the stone from a little above ankle height, directly away from your body, with no vertical component to its trajectory. This is best achieved by leaning towards your throwing arm to allow an unobstructed, sweeping, sidearm throwing motion. Imparting a slight horizontal spin to the pebble will improve the effect, and this is possible with a flick of the wrist at the moment of release. It is important that the stone leaves your hand with the front side slightly higher than the rear.

The primary cause of the 'bounce' is the angle at which the surface of the stone hits the water. The leading edge of the stone must be angled upwards. This can be achieved either by having a stone with a curved underside or a flat stone that hits the water at an angle2. In an effect analogous to that of a wing, lift is provided because the stone finds less resistance in travelling forwards at a slight upwards angle than in travelling forwards at a downwards angle.

The Pebble is also deflected by the surface tension of the water. Essentially, the attractive forces between the molecules making up the liquid are strong enough to take the momentum of the pebble provided that it is applied at a shallow angle. Molecules at the surface of a liquid are not surrounded on all sides by other liquid molecules, unlike molecules in the bulk of the liquid. They still have the same total attractive force, but this is now divided between fewer surrounding molecules - therefore each is bound more tightly to its neighbours.

This is called 'Surface Tension', an effect familiar to anyone who has ever watched water form droplets on a flat surface, rather than forming a thin film.

Friction with the water and the air (air resistance) are the only effects that prevent a 'perfect throw' from giving an infinite number of skips. As the stone touches the water, it is slowed. Thus, each arc will be shorter and steeper than the last. When the angle of descent is too great, the momentum of the stone will overcome the surface tension and the stone will sink.

Air resistance has much the same effect as water resistance, but to a lesser degree. Although the stone is only in contact with the water for a small fraction of its journey, water resistance is greater than air resistance, as anyone who has ever tried to run through knee-deep water can testify. (The stone's vertical motion will be slowed by air resistance too, but this will not be very significant, as the vertical component of the motion is much smaller.)

Finally, every time the stone changes direction, its momentum must be conserved, in accordance with Newton's Third Law of Motion. In the case of the 'skim', downwards momentum is imparted to the water, which results in the familiar ripple effect.

Another Application of Stone-Skimming Physics

The same forces which make a stone bounce off the surface of a pond can also affect other moving objects, at the borders between other mediums. Famously, when a spacecraft is entering the atmosphere of a planet, it is possible for it to skip off the top of the atmosphere and bounce back out into space. Pilots attempting to guide a craft down to a planet's surface must take this effect into account, and must avoid it if they wish to approach the planet safely.

Those with a high degree of proficiency will tend to throw their pebbles at a very slight upwards angle. Although this means that a greater speed is needed to achieve a bounce, it will slightly counter the effects of air resistance and water-friction - in other words, air resistance will mean that the pebble traces the best possible arc after a bounce or two - and thus more bounces can be achieved.

It will always be difficult to count the bounces on a really good throw, as the last few bounces will be close together, both in time and in distance.

The truly advanced will be pleased to hear that there is a championship at The Skimming Championships. The competition is decided on distance rather that the number of bounces, although the stone must bounce at least three times. At the time of writing, the record is an impressive 54 metres.

This subject has also already been skimmed over (if you'll pardon the phrase) at Waterside Games.

1Etymological dictionaries tend to define 'play Ducks and Drakes' as 'to fritter away money, by analogy with the children's game in which stones are thrown into water'. Webster's notes that the phrase has been used since the 16th Century and that alternate bounces are referred to as 'ducks' and 'drakes'2There is a third theoretical possibility. The Barnes Wallace 'bouncing bombs' used a backspin rotation to increase the comparative velocity difference between the lower surface of the skimming bomb and the water. This rapid rotation also bought the Magnus effect - which causes spinning footballs and tennis balls to 'bend' in the air - into play. However, this is unlikely to be of practical benefit to the skimmer.