Discus Content from the guide to life, the universe and everything 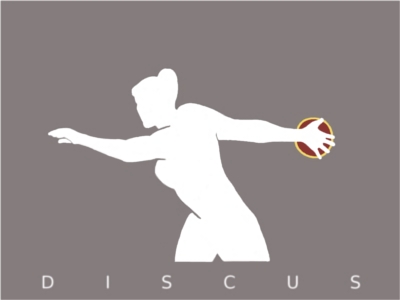 The discus is one of the field events that takes place at the Olympics. It is also a constituent part of the decathlon. This Entry presents a summary of the rules, how to play, the enormous history that can be found for the discus and a few of the greats.

The discus thrower must stand within a circle marked on the ground and throw the discus, a flattish disc, as far as possible.

The following rules cover the actions of an athlete, the rules about the discus itself, and the other miscellaneous rules concerning things such as the circle and the scoring area. As well as these rules, any discus throw must take place inside an enclosure to prevent a stray discus flying off and striking a spectator.

The discus itself is 22cm across, and is quite weighty. At 1kg for all women competing and 2kg for the men, the discus requires a large amount of muscle to throw over 70m. The discuses are made from wood, plastic or fibreglass with a metal rim. The metal rim lets the discus spin faster, giving greater lengths to throws.

There is no specific method of throwing the discus that must be used. Once you are within the circle, as long as you obey the rules above you can get rid of the discus how you wish (evidently, do try not to club someone with it). There are slight differences that are used, such as the exact positioning of the fingers when holding the discus, but generally the method is standardised. The following instructions are based on a right-handed thrower; to adapt, just alter anything direction-based. To see the method, please click here.

Managing a successful 'turn and a half' is so difficult that it can take many years to master. This makes it one sport where experience counts more than extreme youth, faster reactions and superior fitness. As such, most national and international competitors are over 30 years old.

History abounds with references to the discus. In the Ancient Olympics, the pentathlon was established in the 18th Olympiad. One of the five events was discus throwing2. The discus throwing is believed to be the 2nd of the five sports to take place. The discus is mentioned in the poet Homer's works. Given that the Iliad and the Odyssey had a massive influence on any ancient Greek's way of living and their morality, this means that the epic's inclusion of sport, and especially visually impressive ones such as discus throwing, highlights sport's considerable importance to the ancient world.

Examples of discus throwers are everywhere in art, and have been for millennia. One of the most famous ancient sculptures is that of Myron, the discus thrower. Though the original bronze sculpture is lost, a marble copy has been reconstituted. Considered perhaps the best example of early 'moving' Greek sculpture, it appears very lifelike, even to modern viewers; at the time it would have appeared as if real.

Discus is also associated with artwork and the Olympics in modern times. Modern artwork, drawings, statues and even stamps are made of discus throwers, in order to give a portrayal of the vividness of the sport and the Olympics in general. The circular nature of the discus has sometimes been used as a metaphor for life which couples well with its constant motion.

As soon as the Olympics were revived in 1896, a discus competition was put in as a separate event. When women were allowed to enter the Olympics, not every event was introduced at once; and so the discus was the only throwing event in which women could compete in 1928, before the javelin, shot put and hammer were introduced in later Olympics.

Below are just a selection of famous discus throwers, including record holders, multiple gold medal winners, the original champions - in the modern Olympics that is.

Robert Garret, an American, has an entertaining story as to how he claimed the first gold medal for discus throwing. Robert was actually a shot putter by nature, but was encouraged by one of his professors at Princeton to try discus. His sole knowledge of what a discus looked like came from the classical sculptures and artworks around him. He hired a blacksmith to make a discus for him to practise with - not a bad plan, except the discus turned out to be over 30 pounds. Since this is pretty hefty to throw, he decided to pull out of the competition. Upon arriving at the Olympics, he realised the true weight of the competition discus was less than five pounds, so he re-entered himself. At this point, he proved that discus is pretty dangerous when he nearly injured a couple of spectators. However by lobbing, rather than using the graceful throws of the other competitors, Robert managed to win on his final throw with a distance of 29.15m.

Halina Konopacka, a Pole, was the first woman to ever win an Olympic gold medal at discus. Already the women's world champion at discus in non-Olympic events, she broke her previous record to claim the medal with a throw of 39.62m. Retiring soon after her gold medal, Halina became a writer for herself and a spokesperson for her country and sport.

Al Oerter, an American, decided that one Olympic gold medal in the discus was not sufficient. He first won the gold medal in 1956 in Melbourne where he was considered nearly the rank outsider. Only a year later, he was hit by a car, and most considered his sporting career to be over, but he recovered by 1960 in order to compete in Rome. Although he was trailing him for most of the throws, his teammate showed enormous sportsmanship and gave Al advice before his final two throws. Al then set an Olympic record of 59.18m, beating his teammate for the gold. Injured in the neck and then in his rib cartilage in the immediate run up to the 1964 games in Tokyo, he again set an Olympic record, before pulling out of his final throw, nevertheless taking the gold medal. Finally, in 1968 in Mexico city, he launched yet another Olympic record of 64.78m to take his fourth gold medal - the first ever athlete to take the Olympic gold medal in the same event four times in a row.

The current records for men and women at discus throwing are 74.08m and 76.80m by Jürgen Schult and Gabriele Reinsch respectively. Both of the competitors were from East Germany (before reunification). The longest throws achieved in the 2008 Olympics were 68.82m and 64.74m by Gerd Kanter and Stephanie Trafton.

A Couple of Odd Facts

1Counter-clockwise.2The other sports were: running, jumping, wrestling and javelin throwing.