Hammer Throw Content from the guide to life, the universe and everything 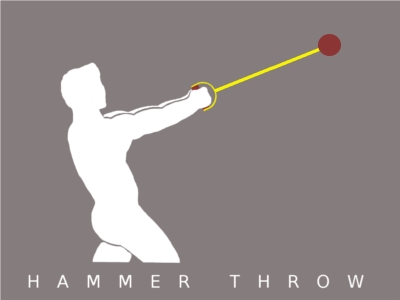 The hammer throw is one of the eight Olympic field events. Unlike most of the others, it is not a decathlon event. In this Entry you'll find the rules, the techniques, the history and profiles of a few of the hammer throw experts who decided to take up this most unusual of Olympic sports.

The rules section below covers three areas: those concerning the hammer itself; those that control each athlete's actions; and any other rules that don't fit neatly into those categories.

But first let's describe the bit that actually gets thrown - the hammer. A heavy metal ball is attached to one end of a thin steel wire, the other end of which is attached to a single handle that the competitor holds onto tightly with both hands. The relative complexity of the equipment means that it is subject to detailed scrutiny to prevent any form of cheating. Very unsurprisingly there is a reinforced cage surrounding the competitor – the hammer wouldn't just sting if it accidentally hit a bystander1.

The method used in the hammer throw is both complex and quite lengthy. There are some variations, such as the number of turns which must be between one and four, but most athletes use three turns. The technique below is the appropriate modern one but can be extremely difficult for beginners, and indeed those who have been doing it for some time, to achieve. This method is a three-turn one for right-handed competitors, and they turn anti-clockwise (for left-handers, simply change directions).

Congratulations, you've successfully killed someone, crippled yourself, or perhaps, just maybe, managed to throw a hammer into a field... You might think that would be enough, yet this researcher suspects you are probably reeling on the ground, wanting to throw up. Unless you are a ballerina, you will need to learn how to 'spot' yourself to not get dizzy – in short, hammer throwers fix their sight on a specific spot and move their head to keep looking at it, so that the body thinks the mad athlete is actually walking in a straight line. For an excellent description of this exact solution, have a look at this review of some IgNobel research.

Perhaps unsurprisingly, the hammer throw does not have roots in the ancient Olympics. The Greeks didn't go in for using the hammer as a thrown weapon like the javelin, although they are likely to have used them when the pesky barbarians got too close and a sword wasn't conveniently to hand. The hammer throw became an Olympic event in the second modern Olympics (1900).

Despite not being present in the ancient Olympics, the roots for hammer throwing do go back quite far. Exact timings are argued over, but the oldest possible contests would be the ancient Irish Tailteann games around 1800-1900 BC. The design of the competition and the hammer were quite similar to today's, with a weight attached to a rope. However other competitions around the time give similar methods, but for throwing weights without ropes.

The Celts in Britain are credited with having competed in this sport for millennia. As before, the technique and exact item thrown vary. There are references to the Celts using the hammer as a weapon, both thrown and hand to hand. They would be encouraged to practice with them and to show prowess in competitions. The fact that they would be practising battle skills means that the ball and rope technique was less likely to be used.

The next notable change in the history and apparent popularity of the hammer throw occurs with reports of King Henry VIII having a go at the event. The good king merely used a hammer to play the game but by the 18th Century the sport was being played once again with a ball and wire.

The Experts at the Hammer

We describe a few of the notable hammer throwers from the history of the event.

At the time of writing, the current world record for men is 86.74 metres, set by Yuriy Sedykh in the European Championships in West Germany in 1986. An interesting man; he married a woman 100m sprinter who also won a gold medal (Yuriy has two gold medals). He is currently teaching the French hammer throwers, and holds a reserve commission in the Russian army at the rank of Major. The women's record is 79.42 metres, set more recently by Betty Heidler, a German, in Halle, in her home country. A far more recent record then Yuriy's, it was set on 21 May 2011. Still competing internationally, it is quite possible that she will beat her own record in the near future.

There have been vast increases in the distances recorded in the men's hammer throw, since it started to be competed in the 1900 Olympics. John Flanagan from the United States threw the hammer 51.01 metres – the current Olympic record for men is 84.44 metres (still notably below the world record) by Sergey Litinov from Russia in 1988. Olympic records for the women's hammer throw have only been competed for in three Olympics, and no new Olympic record was set in 2008. In 2000 Kamila Skolimowska from Poland set the inaugural record with a personal best of 71.16 metres. This was beaten in Athens in 2004 by Olga Kuzenkova from Russia with a throw of 75.02 metres.

There should be lots of interesting facts then about Olympic field sports, in fact, every researcher can probably provide a couple of amusing or brilliant stories about the hammer.3 An event which is built about a ubiquitous tool, especially since the competitors play with the sledgehammer version, should be ripe for some stories, but this researcher has reluctantly constrained himself to sticking to facts about the hammer throw itself and leave the hilarity for readers to provide themselves.

We know that King Henry VIII was a fan of the old hammer throw, but it seems that Queen Elizabeth I also tried her hand at it. We don't know if she was any good, whether she competed in all those long dresses, whether she beheaded anyone who dared to beat her4 but it was popular at the time. While of course this was a male pastime, good old Queen Liz was never one to let any man show they could do anything better than she could.

Hopefully you have not only read the comment about hammer throwers being inside an enclosure to protect bystanders but also agreed that it is smart and if you really must have a go at this odd sport you will cage yourself appropriately. However the Olympic stewards have to be able to watch the throw. The hammer throw is the only sport where they are told to "stand well back, and stay at a distance...away from the hammer". You would think that this would be obvious but apparently we have nearly lost several of our stewards in the last century.

So, you've heard about the hammer throw, you've seen what you have to do; you've even heard about the madness of those involved and those watching. Nevertheless, this intriguing sport makes an excellent challenge for those looking for one...remember, if you never try...you're probably smarter than the rest of us, good luck.

You honestly think that spies spend their time stealing countries' state secrets? Pah! Instead of seeing which countries he should invade during World War II Hitler ordered secret camera footage to be taken of the Irish hammer throwers before the 1936 Olympics in Berlin. The Irish were such world leaders in the sport that it appears he sent Leni Riefenstahl, a propaganda film director. In the 1936 Olympics, German athletes took both the gold and silver medals, setting a new Olympic record – so it would appear Hitler was right in his decision, although the Irish themselves failed to even make it to the finals.

1Unless you enjoy casually breaking multiple bones.2To be fair, this actually relates to events where grip is important, like throwing events or gymnastics – gloves are permitted in dressage and similar.3Please feel free to post any excellent stories; links and pictures are more than welcome, enjoy.4She could have just thrown her hammer at them if beheading was too tedious.