Pole Vault Content from the guide to life, the universe and everything 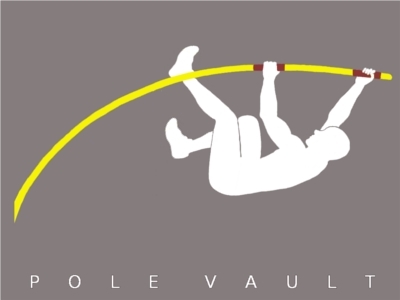 The pole1 vault is one of the eight Olympic field events as well as being one of the ten decathlon events. Within this Entry the rules and method of pole vaulting will be explained, as well as some history and facts about the pole vault.

The pole vault is quite similar to the high jump; in both sports, competitors are trying to clear a vertical jump. As such, both sports have quite similar rules. Unlike the throwing field events, such as the javelin, safety requirements are quite minimal, and only pertain to the actual competitor.

There is one method used in the pole vault, with two rare alterations used. Nevertheless the method used to sprint down the runway with a giant spear, sorry pole, and then throw yourself up to three times your body height into the air remain the same. These instructions are for right-handed pole vaulters; just flip any right/left instruction if necessary. A good place to see basic instructions lined up with pictures of each step is here.

Using poles to get over walls has been used for enormous amounts of time, either by climbing or by a method closer to the one listed above. The Egyptians are some of the earliest ones believed to have used this method, with dates reaching pre-2000 BC. Where one group used, others were likely to have followed as well, so it was probable that poles were used to get over enemy walls4 by many cultures.

Poles have been used for crossing rivers or difficult ground for some time, but the best early conclusive evidence tends to name the Netherlands, or possibly the UK's Lake District, as where pole vaulting was commonly used to clear canals. As a more extreme version it is thought that they were used by gondoliers to jump directly into their boats from land, making accuracy a virtue for those who like being dry.

The pole vault was one of the original Olympic events in 1896 for men, but was only very recently added in 2000 for women competitors. Having no normal direct link to war, it was not one of the ancient Olympic events.

The poles used to be made out of ash, before bamboo started to be used because it was much lighter and bent far more. Hollow aluminium was then used before finally the modern materials of carbon fibre and fibreglass were introduced to the sport. The change of material, with the corresponding increase in heights vaulted, meant things had to be altered for the vaulters to survive. Originally sawdust was used and the athletes would land on their feet; however, the current male record holders reach six metres. Since competitors like their ankles, simply landing on their feet from six metres would not work, and mats were introduced. Every year the thickness and size of the mats increases, so that Olympic mats are now 1.5 metres thick.

The current male world record is held by Sergey Bubka from Ukraine, with a record 6.14 metres, reached in 1994. Sergey won the gold medal in Pole Vault in 1988 in Seoul. He was also the first man to officially pole vault over six metres, a feat which less than 20 men have followed him in.

The record in female pole vaulting is held by Yelena Isinbayeva from Russia who vaulted 5.06 metres in August 2009. Yelena won gold medals in pole vaulting in both 2004 and 2008. She is the only woman ever to vault over 5 metres.

David Volz is responsible for the creation of one more rule. David made use of the fact that you only counted as knocking the crossbar off if it actually fell. He developed a technique, now known as Volzing, where as he went over the bar, if he jarred the bar, he would steady, or in one famous moment, actually replace it again while in mid-air. This extremely difficult to master technique made him extremely notable, not to mention interesting to watch at the time. The rules now forbid the contestant from touching the bar.

Things you Will Never Need to Know about Pole Vaulting

Apparently not only is there pole vaulting, but there is also underwater pole vaulting. As well as an opportunity to belly flop in style from 15 feet in the air, the alternative chances for pole vaulters to do themselves a mischief seem endless; apparently, however, it's quite popular since it doesn't require much effort... sure it doesn't.

We seem to be close to the maximum achievable heights in pole vaulting. The height is determined by a mix of factors, such as: height of the pole, speed of the athlete, technique and flexibility of the pole. Given that 10 metres per second would be a high speed for anyone, and there are practical limits on the maximum possible height and flexibility, there is a limit of height that can be gained by the pole. The athlete can add some more height of their own, as they do a pseudo-handstand on the top of the pole, they can add all the height up to their centre of gravity. This means that the practical maximum pole vault height is 6.4 metres for men and 5.2 metres for women.

1That would be the beam, not someone from Poland... pole vaulting with them has proved tricky.2Evidently it behooves the athlete to pick one that they can actually carry.3A hole, eight inches deep, into which the pole is grounded.4While you could use it to get over your own walls, surely the door would have been easier.