Triple Jump Content from the guide to life, the universe and everything 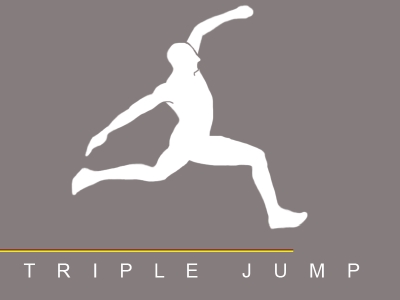 The triple jump – frequently known as the 'hop, skip1 and jump' – is one of eight field events within the Olympics. The triple jump is not part of either the decathlon or pentathlon. This Entry will provide the rules, the method, some history and any interesting knowledge of the triple jump.

The triple jump has the same basic aim as the long jump - that is, you are trying to gain the maximum possible horizontal distance. The triple jump could easily be considered to be a long jump with additional rules.

The method for the 'plain' long jump is quite complex, with several things to be thought about, including deciding your mid-air style. Well, perhaps obviously, the triple jump is even worse. There are multiple actions to be taken beforehand, athletes need to concentrate on more than just the jump during their run-up and any mistakes in the 'hop' and the 'skip' ripple forward to interfere with the jump. You will notice certain similarities between the following instructions and those of the long jump, but there are differences too.

History of the Triple Jump

There is a significant amount of dissension over whether there was any form of triple jump in the Ancient Olympics. The long jump was an event, but records of over 50 feet (15m) were recorded - six metres more than the current world record. Therefore it has been considered that there might have been an event with a series of jumps - whether this would have been anything like the triple jump we see today, we just don't know.

The Tailteann Games, ancient Irish funeral games, are also said to have included a form of the triple jump, though again the exact format is unknown. One idea says that it was actually three connected jumps (in effect a triple jump) and then an additional long jump.

However it would make sense that it took place in a 'hop, hop, jump' style as that was very common much later, in the 19th Century, including being prevalent in Ireland. Indeed the first modern Olympics, in 1896, used the hop, hop, jump style for the triple jump.

Women came late to the game in Olympic triple jump. It only became a permitted event in 1996 at the Atlanta Olympics.

As with many of the other jumping sports, there was a standing version of the triple jump - that is, from a standing start without the run-up. The world record from the 1900 Paris Olympics in the standing triple jump was set by Ray Ewry of the USA, with a jump of 10.58 metres.

Getting in ahead of the game is our Ancient Olympic competitor who has an epigram saying that a Phayllos of Kroton managed 55 feet (about 17m) - a not inconsiderable leap (or three).

Jonathan Edwards, from the United Kingdom, holds the world triple jump record with a distance of 18.29 metres - a record set all the way back in 1995. Edwards actually holds six of the top ten longest ever triple jump distances, as well as a gold medal from the 2000 Olympics, despite jumping in that event over half a metre less than his Personal Best.

Inessa Kravets from Ukraine holds the women's world record at 15.50 metres and a gold medal from 1996.

In every Olympics, one or more countries will cry foul about judging bias - almost always in subjective sports such as diving or gymnastics. However in 1980, in the Moscow games, such arguments spilled over into the normally objective field events. The USSR took both gold and silver in the triple jump, but the top two non-USSR competitors were charged with 9 fouls out of 12 jumps. In one instance Ian Campbell, from Australia, was accused of dragging his trail leg (thereby breaking the three jump rule) - but while he was arguing with the umpire, the pit was raked, shredding any evidence.

The Olympic games in 1968 were good times for fans of the triple jump. Before the games, the record stood at 55' 10½" (17.03m); in one games, no fewer than five athletes managed to crush this record - the least by three inches (7.5cm), the best, Viktor Saneyev of the USSR, by 15 inches (38cm). Two world record breakers failed to even gain a medal.

1Or even the hop, step and jump.2The picture on the Long Jump Entry is a nice display of the hang style.