Long Jump Content from the guide to life, the universe and everything 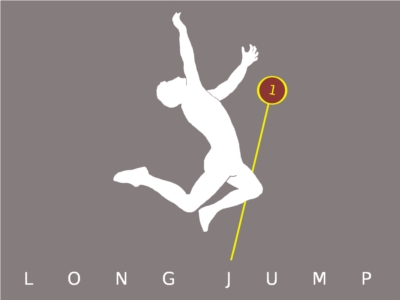 The long jump is one of eight field events held in the Olympics. It also makes up part of the decathlon for men and the heptathlon for women. This Entry will provide the rules, the method and some history and interesting knowledge of the long jump.

The long jump is more closely linked to the triple jump than the high jump and pole vault as you are trying to achieve a maximum distance horizontally, not vertically. The technical rules are not too extreme, as it is a relatively simple sport in concept. Rules concerning the jump will be provided, as they are fixed across all international long jump competitions, but rules concerning how the competition is organised1 will be missed out, since they vary wildly.

The basic method of the long jump is relatively simple, although tweaking each part to extract the greatest possible distance is obviously quite difficult, and there are several slightly different jumping styles. The three parts of a jump are: the run-up, the take-off and the landing. Generally, jumpers take off on the opposite foot to the side of their dominant hand – that is, right-handed jumpers take off on their left foot – but this is only a bare rule of thumb, and must be experimented with thoroughly.

History of the Long Jump

The long jump was the only jumping sport to be included in the Ancient Olympics. Only sports that were relevant to combat were featured in these games, and so the long jump must have been added for its relevance for combat, most likely for crossing difficult ground. The long jump was included within the ancient pentathlon, not as an individual sport. If you thought the long jump turned out to be complicated, have some sympathy: the ancient Greeks did it with weights, known as halteres, which they would throw backwards to gain extra distance. Not really surprisingly, there are ancient accounts describing the sport as one of the hardest. The ancient sport continued to be practised for centuries throughout Greece and the Roman Empire after the Olympics ceased to occur.

The long jump, initially known in English as the 'broad jump', began to be practised in its modern form without any weights from the beginning of the 19th Century, frequently within pentathlons but increasingly as an independent sport.

It has been part of the modern Olympics since they were set up in 1896, and was opened to women in 1928. There is no recording for the 1896 distance so the first world record for the men was in 1901 by the Irishman Peter O'Connor with a distance of 7.61m.

It is now about 110 years since the official record taking of long jump world records began. Peter O'Connor, Jesse Owens, Bob Beamon and Mike Powell have each held the world record for over 20 years. All the other world record holders put together have held the record for less than 20 years.

Just to start off, we'll mention a man called Chionis. In 656 BC, he recorded a jump of 7.05m. While that's a respectable jump, it's a whole 56cm (nearly 2 feet) less than the next record, in 1901. It's possible that man naturally improved in the long jump in the intervening two and a half millennia between these two records, but there may be other reasons, such as the halteres actually being a hindrance and also the fact that ancient Olympic long jumpers were probably limited in run-up length.

The first of the multi-decade holders of the world record, Peter O'Connor didn't just settle for holding the world record with a jump of 7.61m - though this record lasted for two decades internationally and a lengthy 89 years in his homeland of Ireland. He also won two medals in the 1906 intercalated games - a competition that took place in Athens. He had to enter the competition under the auspices of the British Olympic Committee. Upon winning his silver medal in the long jump, he refused to have the Union Flag raised on the flag pole and scaled it himself to wave the Irish flag6.

Jesse Owens is presumably the most famous long jumper ever. He set a world record of 8.13m in 1935 which stood for 25 years. The following year, competing in the Berlin Olympics, intended by Hitler to showcase the Aryan ideal and Germany's unstoppable prowess at sport, African-American athlete Owens managed to win four gold medals: in the 100m sprint, the 200m sprint, the 4×100m relay and, of course, the long jump. One of ten children, Owens had to struggle with both difficult financial conditions and problems with racism. Nevertheless, on the day he would crush the Olympic Record, although not the World Record he himself had set the previous year7. Although Hitler would, in private, state that 'people whose antecedents came from the jungle... should be excluded', Owens himself commented that 'Hitler didn't snub me - it was FDR' (Franklin Delano Roosevelt, the President of the USA, Owens' own country). Only made a sports ambassador in 1966, he would later, in the year before he died, try to convince President Jimmy Carter not to boycott the Moscow Olympics.

Bob Beamon held the long jump record for nearly 23 years. In the Mexico City Olympics of 1968, he nearly didn't make the final at all; after fouling twice he chose to start his jump from well short of the foul line, which would reduce the length since the jump is measured from the foul line. Beamon was always figured to win the gold medal, having won 22 out of 23 competitions that year, but when he saw his jump distance of 8.90m he didn't believe it - or didn't recognise it, since he didn't understand metric. His teammate told him that he'd beaten the world record by just shy of two feet (60cm)... perhaps not the smartest of ideas since he then had a bout of cataplexy, where every muscle gives out and weakens at once. He was lifted to his feet by his competitors in one of the moments that every Olympic Games has, where sportsmen show themselves as ambassadors for humanity. The jump was actually made even tenser: a new optical measuring device had been put in, but Beamon's jump was so long that it couldn't measure it, so it had to be measured out inch by inch manually.

Mike Powell could be considered a 'conventional' athlete, but the most superb long jumper ever. In Tokyo in 1991, he beat Beamon's jump by 5cm, giving a jump of 8.95m. This was despite the fact that he lacked two advantages Beamon had: Mexico City's low air pressure and the wind behind him. Powell jumped with almost no wind, whereas Beamon had a 2 m/s wind behind him. Given the same circumstances, it is thought that Powell would have broken the record by an additional 10 inches (25cm)8.

Galina Valentinovna Chistyakova, representing Russia at the time, jumped 7.52 metres in a competition in Leningrad, in June 1988. Her women's record still stands to this day, meaning it is only a few months off surpassing Jesse Owens' 25-year spell as world record holder.

Some people are too cool to show up to the final. In the Paris Olympics of 1900, some of the events were held on a Sunday, and this caused consternation among the more devout Christians, whose code forbade them from competing on the Lord's Day. American long jumper Myer Prinstein was instructed by his athletics club not to attend the Sunday final of the long jump competition, despite the fact that he was Jewish. Prinstein went along with this, but was furious when his fellow competitor, Alvin Kraenzlein, a Christian, went ahead and competed in the final anyway and took the gold. Prinstein's qualification jump stood and he still managed to get the silver medal. Not too thrilled at missing out on the top prize, he ended up punching the gold medallist winner.

Robert LeGendre is the reason that pentathlon and decathlon athletes who have talents in specific sports always enter into the individual sports as well as their multi-sport event. In the 1924 Paris Olympics, LeGendre set a new World Record of 7.76m for long jump, despite not competing in the long jump competition. He did this while competing in the Pentathlon. His distance was eleven inches (28cm) longer than the distance managed by the long jump gold medallist.

1Such as numbers of competitors to receive extra jumps.2That's the maximum, not the generally used distance.3This is actually a rule, not just a wise action to protect your, ahem, bottom.4If you look at the picture, the jumper is about to enter the hang pose, with his legs back and his arms about to follow.5This isn't sexism; women are far more likely to use the hang than the hitch-kick.6This was the green 'Erin Go Bragh' (Ireland forever) flag, rather than the modern tricolour of the Republic.7Owens mentioned, after the Olympic event, that he had been given some friendly advice by German competitor Luz Long just before his winning jump.8Which shows how brilliant Beamon must have been to beat the world record by two feet.