High Jump Content from the guide to life, the universe and everything 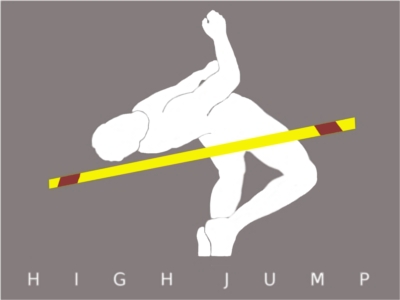 The high jump shares the basic concept with pole vaulting of jumping over the highest bar possible. High jumping is simply a contest between the athlete and gravity, with no interference, so the rules are generally simpler.

The scissors jump is the initial method used by those learning how to high jump. It is a safer method to use, especially on shallower mats, as the jumper will usually land on their feet. Following is a step by step run-through of the scissors method.

The scissors jump is easy to learn, and helps get jumpers used to throwing themselves as aggressively as possible at a bar. As such it forms the basis of all young jumpers' training, even though they will have to re-learn everything when they learn a new style – both the run-up and jump will change but the spirit behind it will not.

The scissors gives a maximum height that is relatively low as it only removes the legs in terms of height achieved – the maximum height gained by a jumper is then reduced by the height from their head to their waist. In more technical terms, the centre of gravity which must get over the bar actually clears it by a long distance in the scissors – wasted height in other words. Even by flattening your body as you jump, in the method known as the 'Eastern cut-off', the last world record formed by a conventional scissor's technique was 1.97m by Michael Sweeney in 18955.

The straddle is almost the forgotten method in high jumping. Normally jumpers graduate from the scissors and go on to learn the flop, which is the method used in international competing. This is despite the fact that the straddle is technically better – since legs can barely pass over the bar and then fall under it, the body's centre of gravity is actually significantly below the bar in a perfect straddle jump. This is impossible in even the flop. The reason for the demise of the straddle jump is mainly because of its lack of use – since no-one uses it the method can't improve. The lack of use is mainly down to the jump being considered harder to learn than the flop.

There are actually more than the three methods that normally make up the high jump. The 'Western roll' is a cross between the scissors and straddle techniques. The straight line diagonal run of the scissors is still used, but now the inside leg is the driving leg as the outside leg is forced up. This means the athlete is thrown sideways over the bar (without rolling as in the straddle method to be explained.)

Following is the method for those who wish to bring the style back into fashion as you win the Olympic medal with a 'deceased' method.

Well. We did warn you it was complicated – you can see the degree in difficulty in learning the straddle method is high, but just picture yourself spinning to glory. Valeriy Brumel did just that, setting the world record in 1964 with a height of 2.28m, and winning an Olympic gold medal in the process.

The 'flop', or the Fosbury Flop which is its more official name, was invented single-handedly by Dick Fosbury6. He won the 1968 Olympics with his introduction of it. Dick was only able to use this method since vastly increased matting on the landing had been added; a flop onto your neck is not much fun when your landing pad is some sawdust.

The Fosbury Flop requires a complete change of method from either the scissors or the straddle. Both the run-up and the jump are very different, with the run-up being executed in a 'J' shape towards the bar and the jump being done head first, backwards over the bar. For those who like effective techniques that appear suicidal, read on.

History of the High Jump

Unlike in some other sports it is, by its nature, impossible to define the beginning of the high jump. It is reasonable to assume that as soon as our precursors gained the ability to spring, they will have tried to see how high they could get – maybe not by a deliberate test of ability, but certainly by using a high jump to reach places. This means we will focus on the written history of changes in high jumping and its competitions.

Despite tenuous references to its inclusion, the high jump is not believed to have been part of the Ancient Olympic games as an individual event. The long jump was included as part of the pentathlon, and it is assumed that the Greeks would have ceased to call it the pentathlon if they had added another event. As such the first high jump competition is generally held to have taken place in Scotland in the early 19th Century. Little is known about the competition, but presumably a Scottish high jumper held the official 'world' record at one stage.

Interestingly early pioneers are believed to have actions similar to both the straddle jump and the flop in the 1860-80s. It was easily realised that it more efficient to be flat as they crossed the bar; however, the flop wasn't taken to its current extreme position, due to the high likelihood of injury. Both the Victorians and the Americans were keen experimenters in high jumping styles.

The high jump was one of the initial sports in the first modern Olympics in 1896. Ellery Clark from the USA set the first Olympic high jump record with a jump of 1.81m. At roughly the same time athletes were experimenting with the 'J' style of running in; this is despite the fact that the straddle and the flop forms were not used in competitions then, and the 'J' style is not used for those two methods (at least in modern methods).

With the beginning of the 20th Century the method known as the 'Eastern Cut-off' was pioneered by the jumper MF Sweeney. This is similar to the scissors jump combined with the flop – the scissors jump takes place, but the body is flat as the athlete crosses the bar. This method allowed him to set a world record of just over 1.95m.

The western roll was then introduced by MF Horine, the direct precursor to the straddle jump, with the simple exception that the athlete doesn't roll so much over the bar7. This allowed him to take the record to just over 2m, breaking the important barrier. In 1936 Cornelius Johnson beat him by another inch. The Americans and the Russians would then be responsible for competing against each other for the next four decades. In 1956 the straddle jump was introduced which allowed the breaking of the 7ft barrier by Charles Dumas. Valeriy Brumel broke the world record multiple times by increasing the speed of his run, and by 1964 had added 7in to Dumas' record. The straddle world record set at 2.33m was made in 1977.

The rather solid sawdust was replaced by cushioning mats, which have increased in thickness every couple of years since 1968. While for most athletes this simply allowed them to be more aggressive with their jumps, it was the mad Dick Fosbury who took it too far8. Introducing the Fosbury Flop for the 1968 Olympics he took gold with his novel method. The introduction sounded the death knell for the straddle jump in international high jumping, at least for the moment.

You have now seen the three main methods, not to mention a good few variations to those methods, so which one will you pick? Or you can always try to find your own way of doing things – the choice is yours. The current world record is 2.45m. Remember, if you fail, even the Olympians get three chances – try, try, try again

Interesting Fact About a 'Highjump'

Operation Highjump, held by the US armed forces, was a crucial role in convincing the government that the US Navy was worth reinforcing. In effect it was an enormous peaceful invasion of the Antarctic during a Southern winter. Somehow this showed the widespread capability of the US navy in different conditions – it also antagonised the Russians who were worried about the increase of US bases into the Antarctic regions. Coupled with the budget it helped preserve, Operation Highjump also set the stage for confrontations between the USSR and the US.

1In other words, if you jump with both feet, you're just jumping upwards into the bar, head first.2Well hopefully at least.3 The more quick-witted amongst you readers may have realised that you have just up, down, up – forming a...scissor-esk movement.4Again, hopefully.5That would be the year before the Modern Olympics restarted.6As you will see, Dick must have been rather lacking in any care about his body, not to mention common sense.7Despite the name, which would imply a dramatic level of spin to the athlete.8Or at least too high.