Javelin Content from the guide to life, the universe and everything 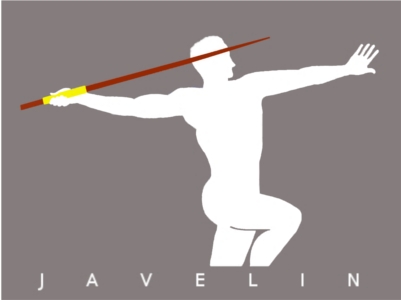 The following section covers the Olympic rules about the javelin and the competitors themselves. Evidently, trained athletes throwing sharp spears long distances does cause potential risks for any spectator without the proper chain mail. As such, the safeguards emplaced on the sport will also be shown.

Unlike in shot put (where two methods are used by competitors) there is only one method used in javelin. This is stipulated, not just because it is the most effective method, but by rules set by the competition associations. It requires an overhand throw over the shoulder. While this seems obvious, it prevents athletes from trying to spin it around and twirl it like a giant discus. It is difficult to see why anyone would attempt this except to attack their doting audience, but the rules are very firm on the style of throwing that must be used. All instructions are given for right-handed throwers – to adapt for left-hand throws, simply switch relevant instructions.

The javelin, unsurprisingly, has a distinct part to play in history from the earliest written records to modern day. Even in the world today it is used as a weapon, where it is the thrown equivalent of the spear, which is used for jabbing or lunging. It has also been used as a source of food, and in its basic form it can be assumed that the javelin was used in the earliest of tool-using days to hunt prey.

The javelin throw was an Ancient Olympic event. It was in the Olympics as it was a common weapon of war, and the Olympics were used to test and demonstrate prowess at war and to honour the gods by doing so. In the Ancient Olympic pentathlon, the rules were similar to the modern day version, with a shorter run up. However, the Olympics were not the first competitive use of the javelin. The javelin throw was one of the sports that made up the games that took place after the death of Patroclus, recorded in the Iliad.

The Romans, as part of their auxiliary forces that were part of the Roman army, had two different types of soldiers equipped with javelins. The first type of soldiers were the Principes. They were armed with the pilum, a form of pseudo-javelin. The pilum would not be an easy weapon to win any world record with. Weighing anything up to four kilograms with a lead ball to increase penetration, the maximum possible throw with a modern equivalent was 30m, and it was only likely to be a weapon at half that range. The second type of javelin throwers were the Velites. These were auxiliary troops armed with weapons that resemble the modern day javelin. Due to their lighter armament (and armour) they were able to avoid cavalry and other charges. It is believed that it was the effectiveness of their javelins that stopped Hannibal's elephants in battle.

The javelin, while part of the Ancient Olympic games, was not in the first modern Olympics in 1896. It was not until 1908 that it was included; nor were women able to compete in the javelin upon their admission to the Olympics in 1928. The first women's Olympic javelin throws took place four years later in 1932, making it the second of the throwing events that women competed in, within the Olympic games.

The longest javelin throw ever recorded was by Uwe Hohn in East Germany during the Olympics at Berlin in 1984. His throw was an absolutely staggering 104.8m – imagine watching Usain Bolt run while a javelin sails past him for the entire track. His throw is not only still the current world record; it is likely to stand forever, since the rules changing the design of the javelin have reduced the distance thrown considerably.

Odd Facts About the Javelin You Will Never Need

The Norse believed that their main god, Odin, carried a javelin that was made by a clan of dwarves. Unlike in modern-day javelin throwing, where only a modicum of accuracy is necessary, this javelin was designed never to miss the target – a helpful ability when the god is forced to use it in Ragnarok.

Although it is banned for safety reasons, a spinning technique is possible. Apparently the technique was discovered by workers who would throw their tools around (who doesn't want to chuck their work away?), and a crowbar would fly best if spun while throwing over the shoulder.

The Finns, and to an extent the other Scandinavian nations, have indoor javelin centres. With these centres approaching 90m in length, all but the best male athletes are capable of doing their throws here. This allows nations with six months of snow to compete internationally. Several full competitions take place during the winter months, with 80m throws being registered each year.

1Sorry, the jokes may well get worse.