A History of Black Powder Guns Content from the guide to life, the universe and everything 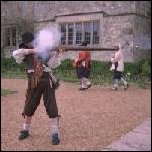 The European inventors of the black powder gun include a monk, Berthold Schwarz, in around 1330, and Roger Bacon, a friar from Ilchester, Somerset, in 1214. Both are credited with coming up with the idea of the gun. It is interesting to note the unfortunate coincidence that the most efficient killing apparatus in the last 700 years was thought up by churchmen.

The use of these weapons is similar regardless of the firing mechanism. So it is worth separating the weapons into the basic types, in approximate historical order (although there are massive overlapping periods of use). This is based upon the particle use of all the weapons, which are tested methods used over the last ten years including research from many areas.

As time progressed, guns became easier to use and it was simple to train the men who used them. On the battlefield, accuracy was not the issue; efficient mass fire was the key to winning (not much different to the rain of arrows fired at Agincourt). Accuracy was down to the individual and came to the fore with skirmishers and snipers. The flintlock is general considered the most accurate gun due to the speed of the lock and it also made a good sporting gun for the gentry.

A cannon is any large, smooth-bored, muzzle-loading gun that can not be held and fired in hand by one person.

Classification Cannon by Size up to 1700; After 1700 by Weight of Shot

At first, some cannons were made from oak with metal hoops, just like a barrel. Some were wood covered with leather. These were one-shot weapons. The next method was using strips of iron hammer welded around a core or former to make a barrel. Rings of iron were put over the barrel to keep it from splitting. It is speculated that the similarity to the making of a wooden barrel may have given the name to this part of all guns. These all had one thing in common: they were dangerous to use, as they were likely to split when fired and injure the user. The first cast iron English cannon appeared in about 1550.

The basic rules for the UK are (correct at time of writing):

Gun ownership is legal only if you comply with the following...

A shotgun that is loaded with fewer than five pieces of shot becomes a class 1 firearm under the terms of the act.

Oddly enough a cannon on the HMS Victory is a shotgun in the eyes of the act.

All other guns that have a barrel length under 24 inches or those that have a rifled barrel are class 1 weapons or a firearm and need a firearms certificate. This can be obtained from your local police HQ providing you have a watertight reason to have one and can store the weapon 100% safely.

How to Load and Fire a Black Powder Weapon

This is how to fire a black powder musket (as long as you are legally able to do so):

To load any black powder weapon, the basic procedure is the same; powder wadding and ball inserted down the barrel in that order.

To use this guide, you will need some knowledge or be with someone who has. If so start at 1.

If at any time there is a mis-fire (it has not fired and the charge is still in the barrel) tell all your companions what has happened and get out of everyone's way. Prick out the touch-hole, re-prime and re-fire.

If it still will not fire, flood the pan and touch-hole with water. Carefully pour water down the barrel (fill it if you can) and leave it in a safe place for ten minutes. If in doubt, put the ramrod in the barrel and check the mark suggested in point 2 above. If it is well above the end of the barrel this will confirm a misfire. Then worm (see Essential Tools) the charge out of the barrel. Clean the weapon to sort the problem and try again. If in doubt, call for help.

How to Prime the Lock/Pan on Each Type of Weapon

The only difference between the weapons will be the locks or firing mechanisms. A brief description of each is noted below.

The Touch or Match Lock

A touch-lock is just a simple pan or a hollow at the touch-hole as in a cannon; or a pan mounted at the side of the barrel as in a hand gun or musket. A small heap of powder is placed in the pan and ignited by a match cord (hemp cord soaked in saltpetre) held in the hand or, if firing a cannon, a linstock (a staff that holds the match). A matchlock is a simple trigger mechanism that holds the match and when fitted to a musket, allows for a controlled firing and allows the user to aim.

The rate of fire of a match-lock musket from 1640 was about two rounds per minute.

Wind or span the mechanism and prime and cover the pan. When ready to fire, lower the pyrites to the wheel aim and pull the trigger. Rate of fire is approximately two rounds per minute.

The Flintlock (Also Known as Firelock or Dog-lock)

This is the same as a flint-lock; however, there is no pan. Instead there is a nipple onto which you put a percussion cap after you have pulled back the hammer to the half-cock position. To fire, pull back the hammer to full-cock, aim and fire. Rate of fire is approximately three rounds per minute.

A Note on Accuracy

Accuracy is variable. If you use a loose-fitting ball (commonly called a rolling-fit) you will get very poor results. If a tight-fitting ball is used or the ball is patched, surprisingly good results can be achieved with all weapons. The best result is achieved by a very tight fit with a cloth patch, forced down the barrel and tapped in with a mallet (hence the term 'to hammer it home').

A ball that is a loose fit in a barrel will, when fired, act like the clapper in a bell, and will bounce from side to side as it travels down the barrel. If the ball is loose-fitting it can leave the muzzle at very odd angles. So the tighter the ball fits and the longer the barrel, the more accurate the shot.

In expert hands, a smooth-bore flint-lock musket properly loaded can hit a person at 150 yards or more, so the 'unable to hit a barn door' idea is doing the weapon a huge injustice. If shooting a moving target, you can't beat a flint lock. A good one will even be fast and accurate enough to take down clay pigeons.

So the modern myth that these guns have poor accuracy is wrong and can only be down to the poor individual accuracy of men firing in haste and in massed ranks. Hollywood can help here: the results from the films The Patriot, The Last of the Mohicans and Waterloo give a good picture of the ability of these weapons in skilled hands. It is likely that those who cast doubt upon the quality may not have used the wepons over a long period or lack the skill to get the best from them. As weapons they are easy to use but hard to master.

To get the barrel clean, use boiling water. Block the touch hole if you can and then fill and empty the barrel as many times as it takes for the water you pour out to be clean. The barrel won't rust as all the water will evaporate (that is why you are using boiling water). Stand the gun upright with the muzzle down and leave until barrel is cool. Use cleaning rod and swab out with oil on cleaning cloth; clean and oil pan, lock, outside of barrel and exposed metal parts; oil the stock; put into bag and put away.

Join a society in the UK. They will train you and are great fun. A few (not all by any means) are listed below. If you cannot find what you are looking for or live outside the UK get on the internet. Some of the best are in the USA.

Enjoy using of all your weapons and be careful.

1Historically they were in use before Agincourt on the walls of Stirling Castle in 1304 but for the purpose of this Entry the start point will be from the first recorded battlefield casualty by a hand gun.