'Asterix at the Olympic Games' - The Film Content from the guide to life, the universe and everything 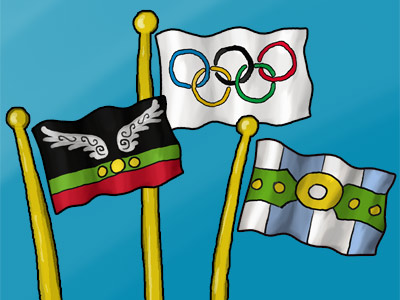 Asterix at the Olympic Games is a live action French film in the successful Asterix series, based on the comics by René Goscinny and Albert Uderzo1. Released in France as Astérix aux Jeux Olympiques in 2007, before the Beijing Olympics, Asterix at the Olympic Games is sadly the weakest Asterix film made so far. Despite this, it is still a very enjoyable, entertaining film.

Gaulish villager Lovesix wishes to marry Princess Irina, having wooed her with poems written by Obelix. King Obnoxious, Irina's father, wants her to marry Julius Cæsar's son Brutus instead, and in an attempt to escape this fate, Irina declares that she will marry the winner of the Olympic Games. Brutus, knowing that only Greeks and Romans can enter the Games, agrees.

Asterix argues that as Gaul is a Roman province and technically part of the Roman Empire, they are Roman and can enter the Games. Lovesix therefore travels to compete in the Games, accompanied by Asterix, Obelix, Druid Getafix and bard Cacofonix. Also taking part in the Games, representing Rome, is Brutus. Brutus is not only determined to win the Games by any possible means, especially cheating, but also plots to assassinate his father Julius Cæsar, who is attending the Games as a spectator. The Magic Potion is not allowed to be used in the Games so the Gauls have to use their wits to win.

Olympic Events Seen in the Film

The following sports also appear briefly in the film, although they were invented after the Ancient Olympic Games finished:

Differences from the Book

The plot of the film in general follows the comic, written in 1968, fairly closely. In common with most other Asterix films, the original source material is not long enough to base a whole film on, and so other characters and sub-plots are introduced. On the whole these work well and are a positive addition to the plot. The characters introduced for the film are Brutus, Princess Irina, her father King Obnoxious, Lovesix, Brutus' henchmen Silenceus, Tenacius and Humungus, mad inventors Doctorjekyllus and Covadinpus, Greek judges Alpha, Beta and Omega, and bard Hairix Bardix. Julius Cæsar also appears in the film throughout; in the comic, only his voice is heard at the very end. Conversely the character of Centurion Gaius Veriambitius does not appear, his role largely replaced by Brutus. Asterix comic regulars the pirates also are not seen.

Two sub-plots are added to the film. The first is Princess Irina and Lovesix wishing to marry, despite her father King Obnoxious wanting her to marry Brutus. The second is Brutus trying to assassinate his father Julius Cæsar so he can rule in his stead.

Other minor differences include the Roman forts outside the Gaulish village being renamed, such as Bubblegum, rather than Aquarium, Totorum, Laudanum and Compendium. In the book all male villagers travel to Olympia (as women were not allowed to watch the Olympics), however in the film only Asterix, Obelix, Getafix, Cacofonix, Dogmatix and Lovesix travel to the games, although Geriatrix and his wife arrive at the end for the wedding. Gluteus Maximus is a less sympathetic character than in the book. Getafix is not kidnapped and does not attend a Druid conference in the book. Representatives from Rome, Sparta and Rhodes take part in the Games in the book, whereas in the film athletes represent Egypt, Gaul, Germania, Greece, Iberia and Rome. The Beetelyzer drug test did not exist. The climax is also slightly different in the film; in the book the last race is a footrace, not a chariot race.

The following table lists the characters in the Asterix films. The names are generally puns or wordplays on the character of the individuals concerned. The English names, where they differ from the French ones, are the names popularised by the English translations of the comic books by Anthea Bell and Derek Hockridge and used in both the English subtitles and dub of the film.

Sadly, Asterix at the Olympic Games is the weakest Asterix film to date. Asterix himself has little impact on the plot and is effectively reduced to the role of a spectator, although the character of Brutus is a welcome addition that saves the film. This is reflected in the poster used to advertise the film and also the DVD and Novelisation covers, where Brutus has centre stage, with Asterix and Obelix to his right and Princess Irina and Julius Cæsar to Brutus' left.

The main failing is the plot. This is disjointed in places, especially with regards to Getafix, who is seen at the Olympic Games one minute, and the next is at a Druid conference with no explanation of how or why this has happened. This should be forgiven; the health of actor Jean-Pierre Cassel and his battle with cancer prevented the filming of as many scenes with Getafix as had been intended.

At heart Asterix at the Olympic Games attempts to be a love story, but it is a love story without any heart. We know that at the start of the film Lovesix travels to Greece and becomes a servant to be with Irina, which is when they actually meet. Before that, Irina had fallen in love with Lovesix because of the poetry he sent her, however it was Obelix who wrote the poems. So how did Lovesix fall in love with Irina, a Princess on the other side of the known world, and was Irina so desperate not to marry Brutus that she would marry anyone? Instead of declaring that she would marry Lovesix if he won the Olympic Games she stated that she would marry the winner of the Games, which implies that she is not that fussed about marrying Lovesix, only wishing to escape becoming Brutus' bride.

The film also suffers from a very lengthy epilogue that drags unforgivably. The character of Edifis appears for no apparent reason, and then proceeds to try to impress Mrs Geriatrix by showing off his sporting prowess with a newly-invented ball, despite not having any. Various French sportsmen and women cameo, playing a variety of games with the ball, including tennis, football and basketball, while Edifis tries to get his ball back.

There are good moments to the film, especially any scenes involving Brutus or Julius Cæsar. The film opens pleasantly enough, in a similar fashion to the comic books, focussing on the Gaulish village. The vistas of Rome, Athens and Olympia, as well as the Gaulish village, are all very impressive and the sporting events are exciting, with humorous moments such as pit-stops in the chariot race. The film is full of comic and cartoon touches which show that it was made with care and attention to detail. For example, in the logo used for the film, the 'I' of 'Asterix' is the shape of the Olympic torch. These small details will reward viewers who enjoy the film in repeat viewing. However, although the film gets all the little things right, it does struggle with the overall plot.

For a comic adaptation, Asterix at the Olympic Games is fairly accurate historically, with a few minor inaccuracies that in no way hamper the enjoyment of watching. The film is after all designed to be entertainment rather than a historical recreation.

There have to date been eight animated films and three live action films based on the Asterix adventures by René Goscinny and Albert Uderzo. The first Asterix film, the animated Asterix the Gaul, was released in 1967. The full list of animated films is:

Three live action Asterix films have been made to date:

Asterix & Obelix Take On Cæsar comes across as a greatest hits Asterix album, with scenes and characters taken from various Asterix books assembled into a storyline which gives a real flavour of Asterix. Asterix & Obelix: Mission Cleopatra is a more coherent and stronger film, the best live-action Asterix film to date. Another Asterix live action film, Asterix & Obelix: On Her Majesty's Service, is in production, expected out by the end of 2012.

These are among the most expensive European films ever made, and have been tremendously successful, especially in France. They star Gérard Depardieu as Obelix, who has a greater prominence than in the comics and cartoon films. In the live action films, major characters are played by different actors in each film. Three different actors have played Getafix and Julius Cæsar, while two have played Asterix.

There are several themes present in Asterix at the Olympic Games that also appeared in previous Asterix films:

A computer game entitled Asterix at the Olympic Games was released for various consoles as well as for the PC.

A novelisation was written, entitled Asterix at the Olympic Games: The Book of the Film to avoid confusion with the Asterix at the Olympic Games original comic. The book is full of lavish stills from the film. On every double-page spread there are text and pictures on the left page, with pictures taking up all the right. This novel follows the plot of the film quite closely, however there are some differences with the film. The Roman forts are again called Totorum, Aquarium, Laudanum and Compendium in line with the Asterix comics, not Bubblegum as in the film. The novelisation also omits entirely the lengthy prologue sequence featuring Edifis. The book usefully has frequent footnotes containing snippets of fascinating facts about the Roman world and the Olympic Games.

One of the other bonuses of the novelisation is the full-colour 'How This Film Was Made' section at the back. Despite lacking real detail about how the film was made, it contains lavish drawings of the sets, costumes and scenes used in the film.

1The Asterix comics have been published in France and worldwide since 1959.2A menhir is a type of standing stone.3Jean Pierre Cassel had also been King Louis XIII in Richard Lester's The Three Musketeers (1973) and The Four Musketeers (1974).4Full name Simon Jacques Eugène Berryer, Sim died in 2009.5Sadly, in the English-dubbed version his voice is completely different from in Asterix & Obelix: Mission Cleopatra as a different voice artist was used.6Michael Schumacher is one of the world's most famous racing drivers, winning the Formula 1 World Championship in 1994, 1995, 2000, 2001, 2002, 2003 and 2004.7A French footballer famous for headbutting Marco Materazzi in the 2006 World Cup Final match against Italy. He had previously been in the French football teams that won the World Cup in 1998 and European Cup in 2000.8Although some historians believe that only married women were banned from watching the Olympic Games.9The Roman Goddess Venus was known in Greece as Aphrodite.