Animated Asterix Films: 'Asterix: The Mansions of the Gods' Content from the guide to life, the universe and everything 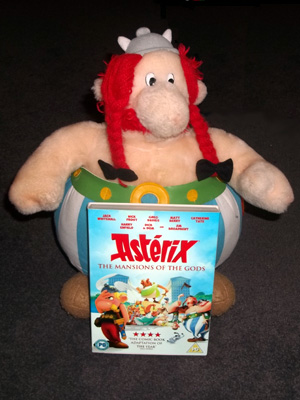 Asterix: The Mansions of the Gods is the ninth animated film featuring the plucky heroic Gaul Asterix who, with the aid of ever-strong Obelix and a magic potion made by druid Getafix, has defended his village in Armorica (modern Brittany) against the might of Imperial Rome. Made in 2014, this was the first Asterix film to be made in 3D and only the second in the series to be computer-animated. Loosely based on the 1971 comic of the same name, the 82-minute film set in 50 BC is a very enjoyable, humorous look at the time of the Roman Empire.

The film was made by French studio Mikros Animation, a division of Mikros Image. After their first short animated film Logorama (2009) won an Oscar (2010), they decided to launch into feature-length animation with Asterix: The Mansions of the Gods (2014), directed by writer/director Alexandre Astier and Pixar animator Louis Clichy. This was produced by M6 Studio who had produced Asterix and the Vikings.

Having realised that he cannot conquer the indomitable Gauls with his army, Julius Cæsar instead decides on a more insidious plan. He hires architect Squareonthehypothenus to completely surround the Gauls' village with luxury apartments called 'The Mansions of the Gods'. Completely hemmed in, the villagers would be forced to either adapt to the Roman way of life or perish.

Although at first the Gauls use Getafix's magic to prevent the construction of these flats, they realise that the Romans plan to work their slaves to death to get the apartments built. To avoid this they give the slaves some magic potion, expecting them to use it to escape captivity, but this backfires; instead the slaves use it to finish building the flats and thus earn their freedom. With the apartments quickly completed and occupied, how can the Gauls attack the innocent civilians with young families who live there? With the forest now a construction site, the wild boar the Gauls rely on for food are driven away. Will Asterix and his friends be tempted to adopt the Roman way of life, with its pretty mosaics and comfortable furnishings? Will they see their old, rustic village as a relic from the past? Will Cæsar finally have defeated the Gauls by using peace?

Differences From The Book

There are a few differences in the film from the original book. The book features a couple, Dulcia and Anonymous, who win an apartment in the Mansion of the Gods when attending the Circus Maximus, and their prize is awarded by the arena's master of ceremonies, Showbusinus. In the film they have a young son, Mischiefus, and though Cæsar does the lottery draw, Senator Prospectus takes on Showbusinus' role. Architect Squareonthehypothenus in the film constantly contests their claim on the apartment that they won, whereas in the book they move in without a problem, only to move back to Rome almost immediately. Dulcia, who appears be much younger, thinner and more attractive than in the book, has a much more prominent role. She and her husband, who in the film is a mosaics expert, become one of the few Romans to be willingly given a taste of magic potion and aid the Gauls at the end against their fellow Romans.

Also in the book it is clear that the slaves are from all parts of the Roman Empire. There are Iberians, Belgians, Lusitanians and Goths, each with their own cultural requirements that conflict with their Roman overseers' goal of building the flats. In the film, though, this is less clear and instead the Numidian character of Flaturtha predominantly represents the slaves, to the almost complete exclusion of all others. Asterix creators Uderzo and Goscinny frequently used stereotypes, mocking people of all cultures and backgrounds, and his appearance is definitely a painfully-outdated stereotype. In the book the freed slaves become the pirates, who are recurring characters in Asterix comics. In the film, though, they move into the apartments and are charged the same amount in rent as their wages, discovering there is little difference between freedom and slavery. Flaturtha even becomes a legionary.

The book mocks trades unions in the rivalry between the slaves and the legionaries. Among the slaves' work demands is the insistence that they are whipped by their slave driver, Givusabonus. Yet whenever the slaves get a concession, the legionaries, represented by Tofungus, also make demands, including equal pay to the slaves' and better accommodation. They then go on strike due to being expected to work in potentially-hazardous working conditions. Though this theme is still present in the film it has much smaller prominence - for example the legionaries refuse to carry out any order that hasn't been requested politely.

The second half of the film is increasingly different from its source material. In the book Cacofonix takes up residence in the apartments only for his singing to drive all the civilians away, with the Roman legionaries then moving in and evicting Cacofonix. This outrages the Gauls who attack and demolish the mansions. In the film the Gauls try a variety of different tactics to persuade the civilians to leave, yet no matter what they do the civilians prefer rural life to the unpleasant hustle and bustle of Rome. In the film Mrs Geriatrix does not appear, whereas in the book she is the keenest to adopt the Roman way of life as she finds Roman clothing more fashionable. After Cacofonix fails to drive the villagers away in the film, more and more Gauls move into the mansions and adopt a Roman way of life until only Asterix is left. The village becomes a tourist attraction popular with the Mansions' inhabitants, complete with a tour guide, until Cæsar orders its destruction. After the capture of Obelix, Getafix and Mischiefus, Asterix stands alone when the army come to demolish the remains of the village before Julius Cæsar's arrival.

The following table lists the characters in the Asterix films. The names are generally puns or wordplays on the character of the individuals concerned. The English names, where they differ from the French ones, are the names popularised by the English translations of the comic books by Anthea Bell and Derek Hockridge, and are used in both the English subtitles and dub of the film.

The British cast is a veritable who's who of 21st Century British comedy, although none of the actors had appeared in an Asterix film previously. Jack Whitehall has created the image of being a young, posh and scruffy character in numerous comedy panel shows, as well as writing and starring in comedy series and spin-off film Bad Education (2012-14, film 2015). This is not his first animated voice role as he played an uncredited troll in Frozen (2013). Nick Frost is most famous for starring in the Cornetto Trilogy films3, starring in and co-writing Paul (2011) and sitcom Spaced (1999-2001). He also has prior animation experience, voicing Thomson in The Adventures of Tintin: The Secret of the Unicorn (2011), as well as a character in Ice Age: Continental Drift. He was Father Christmas in the Doctor Who episode 'Last Christmas' (2014).

Renowned Oscar-winning actor Jim Broadbent has appeared in far too many famous films to list but is well-known for being Horace Slughorn in the Harry Potter films (2009-2011). He played Mother in The Avengers (1998), the Shy Doctor in Doctor Who and the Curse of Fatal Death (1999), and has been in Blackadder, Bridget Jones films, and Moulin Rouge! (2001). He has extensive animated film experience that includes Aardman's Arthur Christmas (2011) as Malcolm Claus and Ethel and Ernest (2016) as Ernest.

Greg Davies is perhaps best known for his appearances on various comedy panel shows as well as starring in sitcoms The Inbetweeners (TV 2008-10, films 2011-14) and Cuckoo (2012+) as well as being the taskmaster on Taskmaster (2015+). Matt Berry has done a lot of voice work for various adverts but also played Douglas Reynholm in The IT Crowd (2007-13). Richard McCourt and Dominic Wood are best known as comedy double act Dick and Dom who have been mainstays of children's BBC since the 1990s.

In the French cast, Roger Carel has voiced Asterix in every animated film since Asterix the Gaul in 1967. A renowned voice artist, he has provided voices in French for numerous Disney films as well as being the French voice of Star Wars character C-3PO.

Despite being a cartoon intended to provide entertainment rather than education, Asterix: The Mansion of the Gods is quite historically accurate and provides a healthy understanding of the Roman Empire at the time the story is set. Here are a few examples of the historical details seen in the film.

Do you not realise that garum sociorum, that expensive bloody mass of decayed fish, consumes the stomach with its salted putrefaction?

Asterix: The Mansions of the Gods has many similarities with other Asterix animated films:

Asterix: the Mansions of the Gods is a very enjoyable Asterix film. It includes all the traditional ingredients that make the films popular, such as the magic potion that gives the Gauls superhuman strength and the dysfunctional villagers who love fighting at any excuse, particularly for pongy piscine purposes when the freshness of fish is questioned. The starting sequence is particularly dramatic, followed by enjoyable 2D-animated opening credits and an exciting boar-hunting sequence that sets the tone of the film to come.

The film does not just contain references to Asterix - Getafix echoes Gandalf and declares 'You shall not pass!' in a nod to The Lord of the Rings. The gladiatorial arena sequences are well done, with the gladiators behaving like wrestlers who are acting and co-ordinating their fight moves a nice touch.

If there is one criticism, it would have to be on the way the sensitive subject of slavery is handled. Flaturtha is the only slave with a talking role in the film and the character's appearance is that of a 1970s black stereotype. Even though his actions do not always bear that impression out, this could justifiably be seen as unnecessarily reinforcing preconceived perceptions on slavery. It was clear in both Asterix versus Cæsar and Asterix Conquers America that at the time, slaves came from all across the Roman Empire and included Italians and Gauls. Slavery was a large part of the Roman Empire and was a consequence of conquest, with captives of all classes being enslaved following a triumphant campaign. There were also a large number of Italian slaves for whom slavery was a class-based institution they were born into. Slavery was not race-based4; slaves were simply the lowest class of society with the poorest people from every corner of the Empire enslaved.

Overall the film is very enjoyable. The English language voices suit their characters. Most of the changes work well and allow the story to breathe, enabling it to last 80 minutes without detracting from the core concept.

So be it. Vini, vidi but not vici. Oh well, you can't vici them all I suppose...
- Julius Cæsar

1A large standing stone or megalith, typically found in Ireland, Great Britain and Brittany, which is where Asterix is set.2Named after the famous Beatles film Yellow Submarine.3Strawberry Cornetto: Shaun of the Dead (2004), Blue Original Cornetto: Hot Fuzz (2007) and Mint Cornetto: The World's End (2013). These films starred not only Nick Frost but also Simon Pegg, who co-wrote them with director Edgar Park. Cornetto ice-creams feature in each film, with strawberry signifying the blood of the zombie genre, blue original representing the blue of police, law and order, and mint signifying little green men.4In fact, it is believed that three Roman Emperors were black, Septimius Severus (193-211) and his co-ruling sons Caracalla (198-217) and Geta (209-211).