'Spaced' - the TV Series Content from the guide to life, the universe and everything 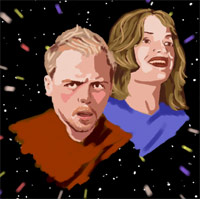 Spaced is a sitcom like no other. When it was first transmitted in 1999, it was unusual in that not only was it both surreal and laugh-out-loud funny, but it also spoke to its audience on several levels. The fact that such a multi-faceted series could be devised in Britain made it even more out of the ordinary. How did this modern marvel come about?

Spaced was written by Simon Pegg and Jessica Stevenson. In the early 1990s they had been pursuing separate careers as stand-up comedians, when they were both cast in a television sketch show entitled Six Pairs of Pants. They became good friends and started writing together. Stevenson's desire was to create a unique sitcom that really spoke to people of her generation at this point in time. Coupled with Pegg's almost geek-like obsession with pop culture (particularly sci-fi), this proved to be the creative spark that the pair needed.

The actual premise of the show probably sounds quite boring: two people meet and, although not at first attracted to one another, they pose as a professional couple in order to rent a flat. This, in itself, in no way sums up the series as a whole - that can only be described as 'what happened afterwards'. Unlike other proposed television comedies at this time, the two writers were pleasantly surprised to find that, due to the strength of their script, a pilot1 was not required. They could go ahead with seven episodes, as an LWT/Paramount co-production to be shown on the UK terrestrial station Channel Four. It was to be produced by Nira Park and Gareth Edwards; now the hunt was on for a director and a cast.

The director they chose was Edgar Wright. He was already known to the writers, having worked with them on a series called Asylum for Paramount Comedy Channel. His inspired, cinematic style2 convinced them that he would take the utmost care when translating their scripts to screen.

As if any sort of quality assurance was still needed, Simon Pegg and Jessica Stevenson were also to star as the lead characters, Tim Bisley and Daisy Steiner. The former is a somewhat lazy, budding comic-book artist who works in a comics store. As our story opens, he is dumped by his girlfriend and seeks solace in a local café. It is there that he meets Daisy, an aspiring journalist, who is looking for somewhere to live...

As good as the two lead performances are, one of Spaced's key strengths is its ensemble cast of supporting characters who are Tim and Daisy's friends.

Three other characters who make infrequent but celebrated appearances are:

Some more noted comedy actors who appeared in Spaced are The League of Gentlemen's Reece Shearsmith and Mark Gatiss, as well as Little Britain's David Walliams. Simon Pegg and Mark Heap's former co-star from Big Train, Kevin Eldon, also had a cameo role. Someone else glimpsed in one episode was comedian and actor Paul Kaye, alias that one-time scourge of celebrities the world over, Dennis Pennis.

[We wanted] to create something that really spoke to people, that communicated something specific about life as a twenty-something at the turn of the new century. We wanted to be honest and real and to do this we needed zombies, aliens, invisible teenagers, wild dogs, midnight rescues, good guys, bad guys, rave pixies and guns - lots of guns.
- Simon Pegg, Jessica Stevenson and Edgar Wright3.

The way in which each episode unfolds is one of the joys of this show. A situation may appear to be progressing conventionally, but before you know it, a character's thoughts or actions lead to a brief cutaway that is almost always a pastiche of some kind. References and homages to other television series and cinematic works simply abound. So many, in fact, that the 2004 DVD release of the series includes a 'Homage-o-meter' - a subtitle track that displays the film or television show being referred to at each relevant moment.

There are countless knowing winks to pop culture: too many to mention here4. The briefest list of examples includes The Matrix, Scooby Doo, Grange Hill, Doctor Who, The Shining, Bagpuss, One Flew Over The Cuckoo's Nest, Misery, Robot Wars, The A-Team, The Royle Family and Platoon. They all pop up when least expected. This style of storytelling was established quite early in the first episode, when a montage of meetings between Tim and Daisy is expertly cut to 'Getting to Know You' from the musical The King and I. However, despite all these various allusions, the one that crops up again and again is Star Wars. Lines are quoted (or mis-quoted) frequently. In one unforgettable scene, Tim - a one-time fan - sets fire to all his memorabilia (having lost faith after Star Wars Episode I: The Phantom Menace) in a shot-for-shot replica of the moment in Return of the Jedi when Luke lights his father's funeral pyre, complete with John Williams' evocative music.

Although great fun to spot, these aren't the be-all and end-all of the show. They are some of the means by which Tim and Daisy's story is told. In that sense, it could be just another 'Will they or won't they?' romantic comedy. But it's not. Along with all the funny stuff, there is genuine pathos and emotion. The viewer is made to care about these characters - and that is the fundamental aim of any artistic endeavour.

The first series was very successful. Among many plaudits, it garnered a BAFTA nomination for Situation Comedy and won Jessica Stevenson a British Comedy Award for Best Female Comedy Newcomer5. Before it had even finished its transmission, a second was commissioned, to be broadcast in 2001.

However, the stakes were higher: whereas first time around, no one really knew to what extent people would like the show, now there were expectations. The fruitful triumvirate of Pegg, Stevenson and Wright made no secret of the fact that the second series was planned to be bigger and better. On Series One they'd managed to stretch their relatively small programme budget to do some ambitious things. Unfortunately, although the amount of resource was increased for Series Two, so were their aspirations for it. Edgar Wright confesses that when the money ran out, he managed to inveigle Channel Four into providing some finance for an extra day to shoot a series of promotional trailers. This was a slight subterfuge: they filmed the trailers in the morning and some much-needed reshoots for one of the episodes, guerilla-style, in the afternoon!

That they managed to succeed in what they set out to do is no small tribute to the considerable talents of not only them, but also the principal cast members and crew, most of whom returned. The homages became more elaborate, and the shoot was by no means easy. Edgar Wright, in particular, was working such long days that at one point he wandered off the set, thinking he'd be dead by the end of that week.

Besides being bestowed with a plethora of awards, the second series of Spaced features the cast's favourite episode, entitled 'Gone'. It was rewritten in half-an-hour when Wright rejected the first draft, and includes a glorious parody of every John Woo6 gunfight sequence. Conveyed with no actual weaponry, it is acted purely by miming in simulated slow motion to the strains of Barber's 'Adagio for Strings'.

Skip to the End

Although it looked as though Tim and Daisy's future was fairly certain, nobody knows when or indeed if a third series will be made. According to Simon Pegg, at some stage there will either be a third (and final) series or, at the very least, a one-off special. However, he, Stevenson and Wright have now moved on to other projects. As much as they would love to get the Spaced team back together, it's all a question of finding the time.

'Shaun of the Dead'

Simon Pegg and Edgar Wright reunited for the big screen to make the 'rom-zom-com'7Shaun of the Dead (2004). They co-wrote it, Pegg starred along with Nick Frost, and Wright directed. Again, Nira Park was the producer. In characteristic fashion, it features its share of homages - not least to Spaced, as most of the cast appear in cameos during the film. The movie has received great critical and popular acclaim.

1A one-off episode, made to gauge opinion from both broadcasters and audiences alike, to see if a series is viable.2Already put to good use on the French & Saunders series, with its careful parodies of popular movies.3From the sleeve notes accompanying the Series One DVD.4Fans of the series may have noticed that most of the headers within this Guide Entry are Spaced episode titles.5She would go on to win another (Best TV Comedy Actress) for the second series.6Hollywood director: born in China, raised in Hong Kong. Famed for the balletic and graceful nature he gives to otherwise violent fight sequences. The film Face/Off is an example of his work.7Typical of them to invent a whole new genre: the romantic zombie comedy.