'Taskmaster' - the Television Series Content from the guide to life, the universe and everything 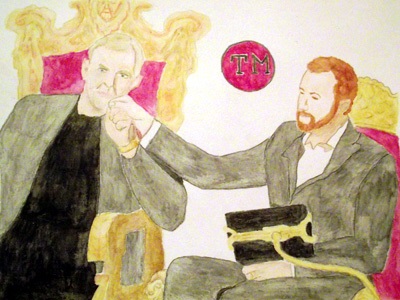 Taskmaster is a UK game show that debuted on TV1 in 2015. The Taskmaster and his assistant set curiously amusing tasks for five comedians. The comedians compete against each other to score the most points and win strange prizes.

Greg Davies is the Taskmaster sitting in an ornate throne and casting judgement on the comedians' efforts to complete the tasks, but it is actually his 'assistant' Alex Horne who is the mastermind behind the fiendish format.

Comedian and author Alex Horne is an executive producer of the show, and his band The Horne Section provide the suspenseful music to introduce the tasks. He was a member of the Cambridge Footlights and has performed at the Edinburgh Fringe, which is where the idea for Taskmaster sprang from. Alex oversees each task, and is occasionally involved in them. Sometimes his involvement is unexpected - for example, when the comedian contestants were confronted with a range of items of flat pack furniture, they debated whether to build a den for the Taskmaster, or just tie up Alex. In contrast, the task 'Rescue Alex' saw Alex tied up before the contestants arrived - they then had to work out how to free him.

Greg Davies was a teacher before becoming a comedian and actor, so he has a suitably authoritative bearing as the Taskmaster on stage in the Clapham Grand Theatre. He is best known for playing teachers in the sitcoms The Inbetweeners and Man Down. He doesn't have much involvement in the tasks, but is in charge of deciding how many points each contestant should receive. His decisions are sometimes straightforward ('Dave Gorman brought the heaviest item. Five points - bam!') but at other times his opinion is the decider, such as when judging who had made the best snow-free snowman ('If this was about artistry, you would have won this task. However...').

The dynamic between the two hosts is part of the appeal of the show. The Taskmaster is capricious, sometimes being stern if people do not behave as expected, but often genuinely enjoying the comedy of the tasks. The assistant comes across as much more serious, sitting next to the Taskmaster on a smaller throne and trying to do as the Taskmaster asks, whether it is just saying what is coming up next ('A task') or engaging in banter ('Banter, erm...'). They share intense glances, and their hands may accidentally or deliberately touch, leading to amusing embarrassment. At other times, the 6ft 8in Taskmaster might tickle his little assistant under the chin like a pet.

Each episode features a number of tasks. The first one is the Prize Task, where the contestants each bring an item with them (for example their most beautiful item, or the most flamboyant clock2). The contestant with the most points at the end of the show wins all the prizes.

Most of the tasks are pre-recorded at various locations (mainly the Taskmaster House, but also places further afield) several months before the contestants meet in the theatre. The Taskmaster and the audience watch the recordings and then the tasks are scored. However, the final task takes place on stage. The contestants have around 100 seconds to carry out an activity such as packing for a holiday, building a tower from potato products or sticking Post-it Notes on to themselves while blindfolded.

Other tasks are varied, such as making a block of ice disappear, or creating a blooper video. Another fascinating aspect of the show is seeing the different problem-solving techniques the contestants use to complete the tasks. A direct approach sometimes works well - for example in the task 'Eat This Egg', Pointless game show co-host Richard Osman won by simply eating the egg, whereas others spent time cooking the egg first. Lateral thinking is more often an advantage, such as in the task 'Propel This Pea the Furthest Distance' - 'Pub Landlord' Al Murray took the pea on a journey in a taxi and claimed five points.

Some tasks are team tasks. In the first series, the five comedians were divided into teams whose ages added up to 100. In the second series, Richard Osman and comedian Jon Richardson were the 'Father and Son' team because of their names (as well as the fact that next to 6ft 7in Richard, Richardson looks like a small boy). In the third series, blond comedians Rob Beckett and Sara Pascoe were 'Brother and Sister', and the three bewhiskered contestants were 'The Beards'. Team tasks include making the best special effects in a film, and making a bed while holding hands.

There are some classic tasks, too. 'Buy a Gift for the Taskmaster with £20' is a favourite, so Greg has been showered with presents including £16 of book tokens in a card ('the card cost £4'), a donation to charity on his behalf, memorabilia from his hometown of Wem in Shropshire, a Lordship, and his name being tattooed permanently on to Josh Widdicombe's foot. Swedish people also feature regularly in the show. Tasks involving them included 'Make this Swede Blush' and 'Balance Swedes on a Swede'.

The first series featured contestants who are well known to the Taskmaster and his assistant. Tim Key the poet and actor is a good friend of Alex Horne. He did his best with tasks, but not always in an honest way. He became a task consultant for the third series, using his cunning to devise fiendish activities for the contestants to complete. Roisin Conaty is Greg's co-star in Man Down so they shared banter on stage. Frank Skinner the comedian, radio host and pop star also appeared, alongside comedian and ex-teacher Romesh Ranganathan. Josh Widdicombe, comedian and co-star of current affairs show The Last Leg completed the line-up.

Other notable people who have appeared on the show include rapper and actor Doc Brown, Canadian comedian Katherine Ryan, and comedian Paul Chowdhry of the topical comedy show Stand Up for the Week.

1On the channel called Dave, which is part of the UKTV network. UKTV is part owned by BBC Worldwide.2A Queen clock with a picture of Freddie Mercury on it won this task, putting a clock attached to a cooker into second place.