Gift Vouchers Content from the guide to life, the universe and everything 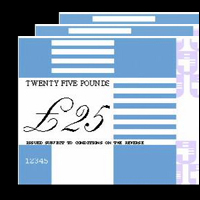 Vouchers are pieces of paper that entitle the bearer to a certain amount of credit at a particular shop or chain of stores1; occasionally vouchers can be exchanged for services rather than goods. Unlike cash, which is issued by the government and so is guaranteed by the Bank of England, vouchers are issued by the relevant company.

Some stores now dispense plastic gift cards instead of paper vouchers2. While previously only found at the lower end of the retail market, they can now be found in all sectors, including, stores such as Harrods. They are similar to the more traditional vouchers with the exception that many of them can be 'topped up' with additional credit.

A voucher can be bought from a shop that will then accept its own vouchers, otherwise there wouldn't be any point in buyng the vouchers in the first place. Sometimes several different stores from different chains will agree to recognise each others' vouchers. There are also specific multi-chain vouchers, such as a High Street Voucher, which can be used at nearly 20,000 stores from dozens of different chains. Vouchers are bought using money, e.g. a person will give the store £5 in cash and will receive a £5 voucher in return. Vouchers are normally bought in cash, but for larger denominations there is no intrinsic reason not to use a credit or debit card. Buying vouchers normally therefore causes no loss or gain of value.

Often vouchers are completely free. Many newspapers or magazines contain coupons that can be cut out and used, making the cost of the coupons equal to whatever you paid for the newspaper or magazine3. Alternatively, you can get these coupons on the back of many products, giving discounts to any future purchases that you may make of that particular product.

Sometimes vouchers come in the form of a reward system. Companies give a certain amount of money to you in voucher for each year or quarter. This is based on how much you have spent within that shop each year; for example, you may receive one pound for every hundred pounds that you spent, making it well worth your while to spend more at these stores. You gain these vouchers simply by asking about your 'points' status or you will be sent vouchers in the post.

Firstly, travel to the store that your voucher is designed to be used in4. Sometimes vouchers can be used in other places than in the specific shop suggested. These are normally other stores that are owned by the same parent company, who obviously benefits wherever your cash is spent.

When paying for items bought in the store, simply give the voucher as payment or part-payment for the goods or services rather than paying with cash. The person at the till will probably sigh, take the voucher and deduct the value from what needs paying and give you your goods. As such the effort involved from the person using the voucher is little more than using cash and actually less than using a credit card, although as explained below the opposite is true for the poor till operator.

Vouchers have benefits to both the shops selling them and the people buying them. Here are some of the advantages:

Benefits for Buyers and Users

We can see that vouchers do provide a noticeable benefit to the economy and fulfil a niche that plain cash cannot, but at the same time they can bring some formidable problems as the next section will explain.

Vouchers, however, have some serious disadvantages compared to cash or credit cards. Here are a few problems that are caused by vouchers.

Disadvantages for Buyers or Users

The primary disadvantages for vouchers are therefore shown to be one of complexity for both users and stores. Critics of vouchers claim - perhaps justifiably - that why bother using vouchers when cash can fulfil every shopping need that a voucher could and indeed many more.

As mentioned above gift cards are very similar to vouchers apart from a couple of differences:

As the most notable example of a voucher the humble book token deserves a special mention. While bearing many similarities to a normal voucher, it has a couple of differences. For a start it can be redeemed at any bookshop, making it far easier to use than any normal voucher. During World Book Day, book tokens are given out for free - normally in the form of one pound chits but occasionally in larger values. School children, in particular, receive book tokens in order to encourage reading at a younger age.

The book token is one of the longest running vouchers, being introduced in Britain during 1932; as such book tokens are very well known and can often be found being given as prizes by schools and scout organisations.

As well as being used in the high street, vouchers can also be used for Internet shopping. They can be bought online, at which point they will normally be posted to the buyer. They can also be used online, where they act as a form of store credit. A specific code will be printed on each card and the correct entry of the code deposits the appropriate sum into the buyer's account. The majority of these vouchers are dispensed by companies that have no high street presence of their own.

There are many other forms of vouchers that are used for services around the country in lieu of cash payment. Here are a couple of the more commonly seen ones.

Should Vouchers be Used Then?

To decide whether vouchers should be used rather than the closest other payment method - cash - the benefits must outweigh the disadvantages, both for the customer and the store.

Just a brief glance of the points shown above normally separates people into voucher-users and voucher-haters in a remarkably Marmite-esque fashion. Consumers who use them add a significant amount to the economy and to each other's happiness each year. Those that don't should mutter, use a crisp £50 note and smile smugly at those using tattered M&S vouchers.

Currently there are millions of pounds in uncashed vouchers just in the UK alone, and a company offers a great deal of money in voucher form every time they run a promotion campaign6. With the amount of money that vouchers provide to the economy each year, it looks likely that this payment medium will be here to stay with us for a while yet.

1That is, the same shop in different locations.2For the purposes of this entry gift cards and vouchers will be considered to be the same unless otherwise mentioned.3Although, if you go to the effort of cutting them out and sending them off, the value will often be more.4The name of this store should be reasonably obvious on the voucher itself.5It's the 'up to' that's dangerous: always check exactly how much of a discount you're getting.6When companies run discounts in national newspapers the combined value is staggering, possibly enough to bankrupt a company if they were all cashed together.