Animated Asterix Films Content from the guide to life, the universe and everything 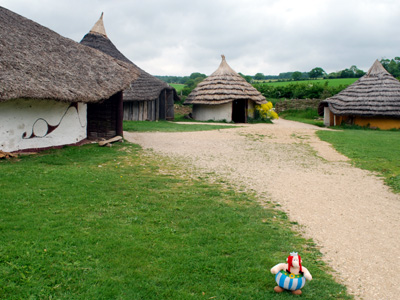 There have, to date, been nine animated films based on the Asterix adventures by René Goscinny and Albert Uderzo. Asterix himself is a French cartoon character who first appeared serialised in a magazine in 1959, with the first full length adventure collected and published in book form in 1960. The first animated Asterix film, Asterix the Gaul, was released in 1967. The full list of animated films is as follows:

The traditional length of an Asterix comic book adventure has not quite been long enough for a feature film, and so various approaches have been adopted. Of the eight films, two have each been made essentially by merging two Asterix comic books together – Asterix Versus Cæsar's story comes from a combination of Asterix the Gladiator and Asterix the Legionary, while Asterix and the Big Fight is a cross between the comics Asterix and the Big Fight and Asterix and the Soothsayer. One film, The Twelve Tasks of Asterix, is an all-new story written especially for the film. The other animated adventures have all been based resoundedly on one comic adventure each. Various ways to expand on the original tales have been adopted. These include:

The films also include more traditional methods of lengthening scenes, such as lingering over panoramic views to set the scene.

The following table lists the main characters we encounter in the Asterix films. The names are generally puns or wordplays on the character of the individuals concerned. The English names, where they differ from the French ones, are from the translations of the comic books by Anthea Bell and Derek Hockridge. The first film and some of the American dubs use different names for these characters.

Asterix frequently encounters a pirate crew, the only multi-cultural international organisation shown in the series, and sinks their ship. Although they are never actually named in the Asterix films, they have names by which they are commonly referred to. They look considerably different the first time we see them, in Asterix and Cleopatra, from all other Asterix animated appearances.

The pirates are actually caricatures of characters from another comic: 'Barbe-Rouge' by Charlier and Hubinon. The names Redbeard and Baba are taken directly from the equivalent characters in the 'Barbe-Rouge' series. Due to the popularity of the Goscinny and Uderzo creations, the Asterix versions of the pirates are better known than the originals.

The voices in the French version are more constant than in the English dubbed translations. In the eight Asterix animated films, in the English versions Asterix has spoken with French, English, American and Liverpudlian accents, as well as both high pitched and low tones. In French versions, however, Roger Carel10 plays Asterix throughout all the films, as well as voicing the dog, Idéfix. Similarly, only three actors have voiced Obelix in French: Jacques Morel in Asterix the Gaul and Asterix and Cleopatra, Jacques Frantz in Asterix and the Vikings, and for all other films, between 1976 and 1994, Pierre Tornade voiced Obelix.

The Asterix films are generally quite historically accurate, considering their cartoon nature. Roman historian Diodorus Siculus who wrote in the 1st Century BC, described the Gauls:

some of them are clean-shaven, but others – especially those of high rank – shave their cheeks but leave a moustache that covers the whole mouth.

This shows that the look of Asterix and Obelix in the animated films is historically accurate11.

Strabo, another Roman historian who wrote shortly after Cæsar's conquest of Gaul, described the Gauls with the words,

The Gauls display..... a love of ornament. They wear golden collars round their necks, and bracelets on their arms and wrists, and those of any status have garments dyed and embroidered with gold.

It was this gold that drew Julius Cæsar's attention to Gaul. Gaul had gold coinage, a developed gold mining system and skilled jewellers, not to mention vast amounts of wealth at a time when Cæsar was heavily in debt with his political career almost over. Cæsar convinced the Roman senate that the Gauls were about to be overrun by the Helveti, a migratory and peaceable Celtic tribe, which Cæsar claimed could threaten the security of Italy.

The senate appointed Cæsar 'Protector of the Gauls' in 59 BC for a five year period, in which time as the Gauls' Protector, according to Plutarch he slaughtered over 1 million Gauls, enslaved another million and became immensely rich. He launched expeditions to Britain and Germany to try and boost his reputation at home, as he had made many political enemies in his get rich quick scheme. Fortunately a rebellion in Gaul, headed by Vercingetorix, allowed him to maintain power long enough to consolidate his position and gain wealth and political triumph.

Although there is no evidence for magic potion, there are some historical records regarding the druids. Sadly these are all written from a Roman perspective and are biased against the druids, who are considered to be enemies of Rome. Druidism apparently originated in Britain, among forests and caves, and was centred not, as is widely believed, at Stonehenge, but in Anglesey. Druids were spread throughout the Celtic world. It took 20 years to train as a druid, and druids were among the most respected members of society, and acted not only as priest, but also as a judge.

Diodorus Siculus, writing in 36 BC shortly after the time in which Asterix is set, describes druids as the intermediaries between the common people and the gods.

These men predict the future by observing the flight and calls of birds and by the sacrifice of holy animals: all orders of society are in their power... They have an especially odd and unbelieveable method of divination in very important matters. They prepare an annointed human victim, plunge a small dagger into his chest in the area above the diaphragm; by observing the way his limbs convulse as he falls and the spurting of his blood, they are able to interpret the future.

Diodorus comes across as strongly anti-Druid, a common Roman bias, and no definitive proof that druids engaged in human sacrifice has been found. Diodorus also reports how barbaric the Druids are by stating,

They will keep some criminal under guard for five years, then impale him on a pole in honour of their gods... they also use prisoners of war as sacrifices to the gods.

The Romans themselves were no strangers to this sort of behaviour. After conquering Gaul, they imprisoned Vercingetorix for five years, put him on display and then strangled him to death to celebrate Julius Cæsar's victory.

Druidism was outlawed in the Roman Empire under the Emperors Augustus, who said that no druid could be a Roman citizen, Tiberius, who also outlawed Soothsayers, and Claudius, who made Druidic practices illegal.

One detail that the authors of Asterix got wrong was giving all the Gauls names ending in '-ix'. This was based on three actual Gaulish leaders, Dumnorix, Vercingetorix and Orgetorix. The ending is actually '-rix' rather than '-ix' and would have been reserved for the Gaulish nobility, as it means king or chieftain in Gaulish. It is closely related to the Latin rex and the Modern Irish rÃ­, both meaning king. It's unlikely a small but plucky warrior or a menhir-salesman would have had such a regal name ending.

Three live action Asterix films have been made. These are:

These were among the most expensive European films ever made, and have been tremendously successful, especially in France. They star Gérard Depardieu as Obelix, who has a greater prominence than usual. In the live action films, major characters are played by different actors in each film. Three different actors have played Getafix and Julius Cæsar, while two have played Asterix.

Asterix & Obelix Take On Cæsar comes across as a greatest hits Asterix album, with scenes and characters taken from various Asterix books assembled into a storyline which gives a real flavour of Asterix. Asterix & Obelix: Mission Cleopatra is a more coherent and stronger film, yet sadly Asterix at the Olympic Games is by far the weakest of the films made so far, with Asterix having little impact on the plot and reduced to the role of a spectator, although the character of Brutus is a welcome addition. At time of writing in 2010, it is expected that the next Asterix live action film will be an adaptation of Asterix in Britain. A live action Asterix in Spain had been proposed after Asterix & Obelix: Mission Cleopatra, but this was abandoned due to creative differences.

Garth And Bev is a charming, Irish-Canadian educational cartoon made in 2009 that encourages children to look at the world around them and be inspired by it. The two main characters, children Garth and Bev, solve problems that arise, and are rewarded by travelling through time to meet famous inventors shortly after their moments of discovery. The third main character, the druid Grandfather Lir, is the spitting image of Getafix, Asterix's druid. Like Getafix in Asterix the Gaul, Grandfather Lir has his own cave and can conjure up magic.

The bronze-age village Garth and Bev live in is all but identical to the one part of Gaul not under Roman occupation. It is surrounded by a wooden palisade, just as the Gaulish village is, and like the Gaulish village is also located next to the sea. The villagers in Garth And Bev also enjoy eating wild boar - the favourite cuisine of Obelix.