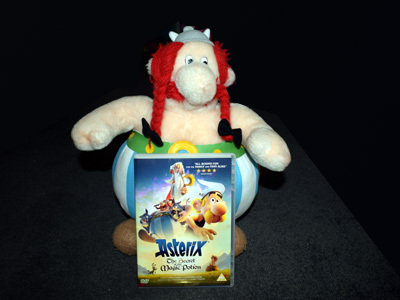 Asterix: The Secret of the Magic Potion is the tenth animated film featuring Asterix, the plucky character who defends the last independent village in Gaul from the Roman Empire with the help of his best friend Obelix and a magic potion made by druid Getafix. Set in 50 BC, this film is an all-new1 story and features many new characters. Despite this, it retains the spirit of Asterix as created by René Goscinny and Albert Uderzo. The film was released in France as Astérix: Le Secret de la Potion Magique in December 2018 with an English language dub released in summer 2019.

After falling out of a tree when gathering mistletoe with his golden sickle, Getafix decides that he is getting too old to be the village's druid and that the time has come to choose a successor. He sends a message to the most senior druids in Gaul and arranges to meet them in the Forest of Carnutes, where he intends to enlist their help. His message, however, is intercepted by his arch-rival Demonix who longs to learn the secret of the magic potion for himself and be recognised as a better druid than Getafix. Though the names of all the young druids in Gaul had been written down – much to the disappointment of Getafix as druids are forbidden from writing - and divided into piles ranging from hopeless to promising, Demonix mixes them all up. This sends Getafix, aided by Asterix, Obelix and young girl Pectin, all around Gaul to audition every single one. They are joined on their journey by all the men from the village except their bard Cacofonix, who has been left behind to be in charge while they are absent, safe in the knowledge that none of the village's women will listen to him at all2.

While the indomitable Gauls meet an endless number of talentless druids, Demonix trains the most promising candidate, hoping to use him to learn the secret for himself. He also enters into an alliance with Julius Cæsar to get him the magic potion. When Cæsar learns that Getafix is away and unable to make magic potion, the attacks on the village increase in the hope of making the remaining villagers run out of magic potion and thus allowing the village to be conquered.

Will Getafix find a successor and who can replace the irreplaceable druid? Can useless magic find its purpose, or will Demonix learn the secret of the magic potion?

In the English-speaking cast, none had previously voiced characters in Asterix films, being predominantly Canadian actors. In the original French-language edition many actors reprised characters they had played in Asterix: The Mansions of the Gods including Guillaume Briat (Obelix), Bernard Alane (Getafix) and many others. However Roger Carel, who had voiced Asterix in French since the 1960s, had retired and so was replaced by Christian Clavier who had played Asterix in the live action films Asterix and Obelix vs Caesar (1999) and Asterix and Obelix: Mission Cleopatra (2002).

Let's Bash the Romans: The Making

In 2014 the debut full-length film by French/Canadian company Mikros Animation5 was Asterix: The Mansions of the Gods. It was the year's most successful animated film in France, where it made $26 million. It made over $55 million worldwide, despite not being released in the US. After this phenomenal success a sequel was inevitable. This film was written by Alexandre Astier, who had briefly appeared in Asterix at the Olympic Games. Astier co-directed with former Pixar animator Louis Clichy. The film was produced by M6 Studio, a division of the Groupe M6 Company that runs French television channel M6, which had not only produced Asterix: The Mansions of the Gods but also the previous film, Asterix and the Vikings (2006). The combined production and merchandising budget was €37 million.

Asterix: The Secret of the Magic Potion has many similarities with other Asterix animated films:

A key part of the film involves the druids whose culture is centred on the Carnutes' Forest – in real life the Carnutes were a tribe in the centre of Gaul. Strongly independent, they began the rebellion that led to the full-scale Gaulish rebellion led by Vercingetorix. At the time Asterix is set, Julius Cæsar wrote that the druids took 20 years to learn their knowledge, which was learnt by heart and never written down, though they knew how to write and would do so on mundane matters. Cæsar's writing, which he used as propaganda intended to justify the druids' suppression, noted that they did indeed school the young – specifically young men – and that there was a supremely-powerful arch-druid, although this power was not derived from a magic potion. Cæsar wrote:

At a fixed time of year they assemble at a holy place in the territory of the Carnutes, which is thought to be the centre of Gaul. Anyone with a grievance attends and obeys the decisions and judgments which the Druids give. The general view is that this religion originated in Britain and was imported into Gaul, which means that any keen student of Druidism now goes to Britain for information.

In 43AD, so almost a century after Asterix is set, Pomponius Mela wrote in De situ orbis (A Description of the World) that druids considered caves and forests sacred. So there is indeed evidence that the film is accurate in that druids would not have written down their secrets, that druids taught others and had a holy place in the Carnutes' territory, which may well have been a forest. The sign saying 'no non-Druids allowed (or women obviously)', though, is not accurate as the area was used as a court open to anyone.

A second strong Asterix film from Mikros and M6, this time an entirely original plot that nevertheless feels true to the spirit of the Asterix films. They include many of the background characters, such as the pirates (who lose four ships in this film, an all-new record). The film opens with a strong sequence showing Getafix gathering mistletoe by throwing his boomerang-like golden sickle, and surfing through the oak trees in a sequence similar to that seen in Disney's Tarzan (1999).

A little more of village life is revealed, as Getafix apparently is the village's schoolteacher as well as druid. It also shows more about druids, being the first film in which other genuine druids appear. Though often seen in the books we see the Carnutes' Forest for the first time in an adaptation. We learn that Druids not only have white beards but the cairns of piled stones outside their homes can identify them. They are not allowed to write – passing their knowledge directly from druid's mouth to druid's ear - or fall out of trees. They consider the Carnutes' Forest sacred, with a giant sign at its entrance stating 'No non-druids allowed (or girls obviously)'. Why the druids have a giant sign outside the forest when they are forbidden from writing is never revealed. (Presumably magic is the reason why anyone, no matter from which direction they approach the forest, always arrive at this exact spot.)

There seems to be a move in more recent films to not cast the Romans as the villains in as black and white a fashion as before. In this film an entire Roman legion are given magic potion so they can help the villagers fight Demonix, yet both before and after that they are the enemy fighting the Gauls. This is not too different from the Gauls themselves, who frequently fight each other, though in this case the fight begins when Unhygenix insults Geriatrix rather than Fulliautomatix insulting Unhygenix's fishmongering. There are also instances when the minor characters are unnecessarily divided along gender lines. Girls are forbidden from the Carnutes' Forest; however, Getafix encourages Pectin to break this rule, which could at least be taken to indicate that positive progress is being made. Getafix's quest apparently requires the presence of every village male but one, and no females but Pectin. This seems out of place for a film made in the 21st Century, even if it is set in 50 BC. Cacofonix, possibly the most incompetent villager (despite fierce competition for that title) but certainly the campest, is still technically left in charge of all the far more level-headed women. Unsurprisingly under his command the village he stayed behind to defend is virtually all-but destroyed once again.

As in other films Asterix and Obelix squabble and fall out, though in this case it feels somewhat forced - Asterix storms off when told that there is only one more young druid to see nearby before their quest ends and Asterix decides he cannot bother any more. He gives Geriatrix his helmet, sword and magic potion seemingly only to be easily captured. Another unusual choice is the prominent use of '80s classic song 'You Spin Me Right Round' (1984) by Dead or Alive on the soundtrack. It works well enough and fits in with the action, but seems out of place.

There are plenty of moments to delight, particularly Demonix's relationship with the little boar. In a film in which the animated animals play a large part, with boars and chickens inadvertently given magic potion, it seems unusual that Dogmatix the dog does virtually nothing. Narratively the film is unresolved; Getafix goes on a quest to appoint a successor and, after dismissing all the best young druids, discovers a potential successor under his very nose the whole time: the young Pectin. Yet the story then backs away from the next step before restoring the status quo and concluding that Getafix is irreplaceable after all, and no-one else learns the full secret of the magic potion.

1Not based on an existing Asterix story as most other animated Asterix films were.2None of the villagers ever listen to Cacofonix without taking the precaution of gagging him first.3A large standing stone or megalith, typically found in Ireland, Great Britain and Brittany, which is where Asterix is set.4Previously known as minor character Senator Consensus in Asterix: The Mansions of the Gods.5Mikros Animation is a division of Mikros Image and owned by Technicolor. Their first short animated film Logorama (2009) won the 2010 Best Animated Short Oscar.