'After Eight' Chocolate Mints Content from the guide to life, the universe and everything 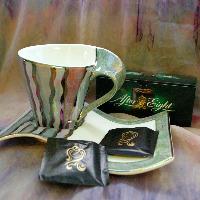 Made by Nestlé, the original After Eight chocolates were mint-flavoured thins designed and advertised as an after-dinner mint, hence the product's name. They were originally created in 1962 by Rowntree's, a family business consisting of a group of Quakers which included Joseph Rowntree. Nestlé bought Rowntree plc in 1988, gaining the After Eight product along with other Rowntree legacies.

Nestlé, one of the world's biggest sprawling international food and beverage companies, has its roots, foundations and main headquarters in Vevey, Switzerland. There are branches of Nestlé in various different countries, including the UK, the USA and Germany. In 1993, Nestlé's £18 million chocolate-producing factory was opened in York by Ann Reid, the local Lord Mayor Councillor. This factory, where After Eights are produced, is capable of producing four tonnes of chocolate per hour. The After Eight brand products are exported to more than 60 countries, although not all products are marketed in all countries.

Mint-flavoured After Eights consist of a 4cm (1½-inch) square of thin dark chocolate with a peppermint-flavoured fondant centre. Each chocolate is encased in a small black square individual envelope, which sits in a tray inside a long, slender dark green box. There are 24 mint thins in the 200g box1; other sizes are available including 300g and 400g box and a mini-box containing just five.

Their launch as an after-dinner item in newspaper and magazine advertisements portrayed well-dressed women of a higher social class, who were excellent at organising dinner parties, which always offered the After Eight Mints. One advert claimed that 'After Eight can turn any evening into an occasion'. However, these same women were shown to be inept in other areas, such as managing the home's account or dealing with political issues. This same theme was later continued in television adverts.

In an attempt to sell the chocolates to visiting tourists, the original mint-flavoured thin is also packaged and marketed as a London souvenir gift, with pictures on the top of the box of seven popular London tourist attractions including Big Ben, Tower Bridge, The Palace of Westminster (which contains the Houses of Parliament), the London Eye, and the White Tower - the central part of the Tower of London. This London Sights box is quite large and contains around a hundred After Eight mints.

To enable people of orthodox Jewish beliefs to consume After Eights as they were intended - after an evening meal with friends - some products are produced as Kosher, that is, prepared without meat, milk, or their derivatives and therefore permissible to be eaten according to dietary laws such as:

One must wait a significant amount of time between eating meat and dairy. Opinions differ, and vary from three to six hours. This is because fatty residues and meat particles tend to cling to the mouth. From dairy to meat, however, one need only rinse one's mouth and eat a neutral solid like bread, unless the dairy product in question is also of a type that tends to stick in the mouth.
Judaism 101

Various different-flavoured fondants have been used over the years for the centre of the After Eights, using the same dark chocolate covering. There are also the white After Eights, which are white chocolate with a mint fondant centre, and the milk chocolate mint thin, which is produced in a dark-blue box. With these different flavours came different packaging, with brightly coloured orange boxes and coordinating orange envelopes encasing the orange-flavoured thins. Some of the additions to the After Eight range are only available around seasonal times, such as Christmas, Easter or Valentine's Day.

In late 1998, in time for the Christmas market, Nestlé launched After Eight White, a white chocolate version of the original After Eight. The size, 300g box containing 35 white chocolate thins, and most aspects of the packaging, such as the After Eight labelling and logo remain the same. However, the colour of the box, and the internal envelopes which hold the chocolate thins are a creamy-white. There are 36 calories per thin.

Other flavours in the After Eight selection which include Orange, Lemon Sorbet and Irish Cream are marketed for the Christmas market, and are available approximately from July through to January, appearing in different coloured boxes. Only the flavouring differs between chocolates, and this is listed in the flavouring section of the ingredients.

After Eight mint straws are available in a five½-inch silver-coloured tube, which contains 20 five-inch straw-like dark chocolate mints. The mint straws fan out when the top of the tube is removed, leaving around three inches for the straws to stand in. It is advisable to keep the straws refrigerated to prevent them bending once the tube is opened.

There are only 25 calories per straw, although they may contain traces of peanut or other nuts. The straws are not endorsed as being Kosher. In Blue Peter style, the empty tubes can be covered in fancy paper, or left as they are, and used as a pen/pencil holder.

These come in boxes of four individually-wrapped wafer cones, with mint-flavoured ice cream and a chocolate ripple which are topped with pieces of plain chocolate. There are 174 calories per cone, and these may contain nut traces.

The eight-inch-long, three-inch-wide wrapper of the After Eight ice cream holds a bar of dark chocolate with a cool mint-flavoured ice cream centre on a stick. The chocolate ice cream bar itself is approximately four inches long and two inches wide; at its widest part it has a depth of ¾ of an inch. These are also available in a box of three individually-wrapped ice cream bars3. There are 279 calories per bar, which are suitable for vegetarians but may contain nut traces. They also carry a somewhat inessential warning that the product may stain.

Differing slightly from seasonal thins, the limited products are not identical each year, and are produced for a shorter time period, then removed from shop shelves once the particular days they were intended for have passed.

The After Eight Logo

The logo consists of the image of an Ormolu Mantle Clock, similar to the antique French Louis XVth style. The time is set at just after eight o'clock, and there is a shadow of a number eight behind the clock. The logo is embossed on the exterior of the boxes and tins of After Eight brand products, and printed on both the envelopes which contain the thins and wrappers of unboxed products.

There appears to be some confusion surrounding the small envelopes the mints and various flavoured thins come packaged in. The following are the views of Researchers regarding the envelope dilemma.

The act of leaving the empty wrapper in the box may be seen as part of the excitement of getting an After Eight offered. 'Am I gonna get one?' or 'am I not?'
As a person who leaves the wrapper in the box I just thought I would try to defend myself and others like me.

Why do people always put the empty envelopes back in the box? So disappointing when you realise that there are none left!

Perhaps putting the empty covers back in the box does away with the difficult etiquette moment 'Who's going to have that last one?' or being able to pinpoint who did have the last one.

I have been corrected on the 'Take the chocolate from the envelope and then return the envelope to the box'.
It appears that the person being offered the After-Eight mint is even lazier than that, and just takes the mint, leaving the envelope behind. This causes the person who is offering the box to have to decide if there are actually any mints left!

The Meaning of Liff

In 1983 Douglas Adams and John Lloyd wrote the book The Meaning of Liff. It was written in dictionary style, using place names to invent meanings for them. One they used was Cannock Chase.

CANNOCK CHASE (n.)
In any box of After Eight Mints, there is always a large number of empty envelopes and no more than four or five actual mints. The cannock chase is the process by which, no matter which part of the box you insert your fingers into, or how often, you will always extract most of the empty sachets before pinning down an actual mint, or 'cannock'. The cannock chase also occurs with people who put their dead matches back in the matchbox, and then embarrass themselves at parties trying to light cigarettes with three quarters of an inch of charcoal.
Douglas Adams and John Lloyd

In 1990 The Deeper Meaning of Liff was published, with an extra sentence added to the end of Cannock Chase:

The term is also used to describe futile attempts to pursue unscrupulous advertising agencies who nick your ideas to sell chocolates with.

It is thought this may have been added after Rowntree/Nestlé ran a newspaper/magazine advert for After Eight mints. The advert, which was a sort of paper-chase involving finding the remaining mint amongst the empty envelopes showed a spoof dictionary entry for 'Cannock Chase' (which is actually a place in the UK) as the search for the last envelope to actually contain a mint.

The Meaning of Life

The 'waffer thin mint', as pronounced in a pretentious French waiter's accent, appears in the Mr Creosote sketch of Monty Python's The Meaning of Life.

Mr Creosote, as played by Terry Jones, is said to be the fattest man in the world and is dining at a French restaurant, the waiter being played by John Cleese. After vomiting, Mr Creosote orders just about everything on the menu to be mixed up in a bucket and served with plenty of drink, including champagne, and six crates of brown ale to wash it down with. After consuming the (g)astronomical meal, the waiter offers Mr Creosote a 'waffer thin mint'. At first, Mr Creosote refuses the offer with 'I couldn't eat another thing. I'm absolutely stuffed.4' The waiter persuades him to have just one, and then runs for cover as Mr Creosote first expands, then explodes, spraying hapless onlookers with various upper bowel contents.

Ross Burden, from Ready Steady Cook, has created a recipe that includes After Eight chocolate mints.

If you like to experiment with baking, you could try melted After Eight mints as a top covering for a chocolate cake, or to add extra taste and texture to any other cake or even biscuit.

1The weights and quantities in this Entry were correct at the time of writing (2006). However, in an unstable market these could change, either by down-sizing and decreasing or by increasing, temporarily or permanently, due to promotional offers on products.2Orthodox Union - a Jewish organisation in North America.3In July 2006, these boxes were a promotional offer of £1 per box; the same price as buying one individual After Eight ice cream bar. The only difference was the wrapper, instead of the ingredients and other details they have the words - Multipack Product Must Not Be Sold Separately.4Along with some slightly stronger language and a few pieces of flying food.