Tower Bridge, London, UK Content from the guide to life, the universe and everything 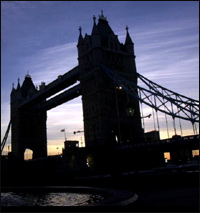 Tower Bridge, widely regarded as the most glamorous bridge across the Thames, was built because the demand for access across the Thames in London far exceeded the capacity of the existing bridges. Increased commercial activity in the East End was creating a need for more vehicles to be able to cross the river, downstream of London Bridge.

Sheer weight of traffic was causing huge problems, and over a period of 11 years around 30 petitions from public bodies were brought before the authorities. The most common suggestions were the building of a new bridge or the widening of London Bridge, although there was also a proposal for a railway line to be built at the bottom of the river. This would carry a travelling stage with its deck at high water level. Designing a bridge over a busy river with low banks was not going to be an easy task. The reason for the difficulties was that the 'pool' of London (the area between London Bridge and the Tower of London) was heavily used by river traffic, and access had to be maintained.

The pool has been heavily used since Roman times, because it meant that large ocean-going vessels could simply sail straight up the River Thames and unload their goods directly in the city; there was no need to transfer cargo to small river vessels. The river was a major transport route, and for centuries large ships docked at the wharves here to unload. This allowed their cargo to be distributed using the inland river system, and later, by Victorian canals. Although trade began moving away from the pool around the middle of the 20th Century, at the time, large vessels still needed constant access to the Pool.

In August 1882 the traffic over London Bridge was counted for two days to work out an average for a 24-hour period. At that time London Bridge was only 54 feet wide, yet was carrying over 22,000 vehicles and over 110,000 pedestrians. A committee was set up to consider the petitions and make a decision. Subways and large paddle ferries were also considered at this time.

In 1878 the City architect Horace Jones proposed a bascule bridge. 'Bascule' comes from the French for 'see-saw', and a bascule bridge at street-level has two 'leaves' that can be raised on a horizontal axis to let ships pass on the river. Similar to a drawbridge, it works on a pivot with a heavy weight at one end to balance the length (weighing 1000 tons) at the other end. It would mean that steep approaches to the bridge could be avoided. His first design was rejected, but in 1884 his second was approved, and an Act of Parliament was passed in 1885 authorising its building. The Act stipulated an opening central span of 200 feet and headroom of 135 feet when the bridge was open1. In practice these measurements were exceeded by five feet and six inches respectively. It was to be built in keeping with its surroundings - the Tower of London. The site was chosen because, in an area surrounded by wharves, it was cheaper to build the north side of the crossing in the Tower's ditch than it would have been to buy the land.

Horace Jones was appointed architect. His original designs were very medieval in influence, with the bascules being raised by chains. The revised design was been jointly presented with John Wolfe-Barry, a civil engineer, and was more influenced by the Victorian Gothic style, possibly because Wolfe-Barry's father had been one of the architects on the Houses of Parliament. The bridge's main towers are similar to those of a medieval Scottish castle and the bascules open like an old castle drawbridge. Many of the decorative elements on the stone façade, and the cast iron work are typical of Victorian Gothic architecture.

Horace Jones died in 1887, just over a year after building work had begun. The foundations had not been completed, and the architectural designs were still only sketches. His assistant George Stevenson took over, and changed the stonework from red brick to Portland stone and Cornish granite. Stevenson also designed many of the decorative details.

The bridge was opened to traffic by the Prince of Wales (the future King Edward VII) on 30 June, 1894, on behalf of Queen Victoria. The bridge had required eight years of construction at a cost of just over £1,000,000. The journal The Builder called the bridge 'the most monstrous and preposterous architectural sham that we have ever known'.

Work was started on the bridge in 1886, with the Prince of Wales laying the foundation stone over a time capsule containing papers and coins. The work was intended to take only three years, but parliament was asked twice for more time. Two piers containing 70,000 tons of concrete were sunk into the river bed to support the weight of the bridge, and it was on these that the towers were built. Because the central area of the river could not be obstructed, the towers were built one at a time. The bascules had to be built in the upright position, including the wood paving.

The towers are 293 feet tall from the foundations, and are made of a steel frame to support the great weight of the bascules, clothed in stone to fit the stipulation that the bridge harmonised with the Tower of London. They contain lifts and stairs to the two walkways running between the towers. The walkways are 110 feet above the roadway and are held in place by metal girders. They were used to stabilise the bridge, and to give pedestrians a way to cross so that they did not have to wait for the bridge to be lowered before they could cross the Thames. As boats used sails less, and steam more, the bridge took only six minutes to open and close. Most pedestrians simply enjoyed the view while waiting for the bridge to close again. The walkways were closed in 1910 due to lack of use by most pedestrians - they had become home to prostitutes. They stayed closed to the public for over 70 years, although they did house some anti-aircraft guns during World War I, and have since been refurbished and re-opened as part of the visitor attractions for the bridge.

The two side-spans operate on the suspension principle; the 270-foot long approaches (decks) are hung from curved lattice girders. The girders are attached to the towers at the level of the walkway where they are linked together by a chain - each side anchoring the other. They curve down towards the road, then curve up again, reaching up and over the abutment towers at the shoreline before curving back down to the shore where they are anchored. Each chain that runs between the girders and the bridge weighs about the same as a small elephant, per metre.

The road has a width of 35 feet, with a 12.5-feet-wide pavement on either side; this makes the bridge 60 feet wide.

More detailed, technical information about the construction of the bridge can be found here. Despite its appearance, Tower Bridge is a steel bridge, not stone, and is extremely strong. It was originally painted in a chocolate brown colour.

The bridge has always been operated by hydraulics; originally the two pumping engines were powered by steam engines, and the energy stored in six accumulators, ready for use when needed. One set of engines powered the lifting engines which worked the pistons, cranks and cogs that raised the bridge, to save wear and tear. It lifted in less than one minute to 86 degrees. The south side opened slightly before the north side, as they were controlled separately. Since 1976 the hydraulics have been powered by oil and electricity, and the bascules now open together.

When the bridge is shut, and the leaves brought together, two bolts called the 'nose bolts,' carried on each leaf, are locked by hydraulic power into sockets on the other leaf.

When the bridge needs to rise (this requires 24 hours notice), traffic lights stop the traffic. The road gates close, then the pedestrian gates close. The nose bolts are withdrawn, and the bridge lifts. The bascules only fully open for large ships, or to greet ships of importance. In their first year the bascules were raised 6160 times. Nowadays the bridge lifts around 1000 times a year to allow tall ships, cruise ships, naval vessels and other large craft to pass under, and can open and close in five minutes. The record amount of activity stands at 64 lifts in 24 hours in 1910.

The bridge has been the backdrop for a few exciting events, and has appeared in a number of films. These include Bridget Jones's Diary, The Mummy II, Spice World2 and The World is Not Enough.

During the summer of 1912 the English pilot Frank McClean flew a short pusher biplane up the Thames. He failed to get sufficient height to clear the bridge, so he flew under the walkways. This event was captured by newspaper photographers, and the image became famous. He was not the only one - pilots (deliberately) flew under the walkways in 1973 and in 1978.

In 1952, a number 78 double-decker bus was unlucky enough to be on the bridge when it opened. Back then, the lights would change to red, the gateman would ring bells to encourage the pedestrians to move off the bridge quickly and close the gates, and the head watchman would order the bridge to lift when it was clear. On this day in December, there was a relief watchman, and something went wrong. Albert Gunter, the driver, saw that the road ahead appeared to be sinking. In fact, his bus was perched on the end of an opening bascule, which was giving the illusion of a sinking road ahead. He realised that he would not be able to stop in time to prevent going into the water, and making a split second decision, decided he would go for it. He accelerated and jumped the three feet gap, landing on the north bascule, which had not started to rise. None of his dozen passengers were seriously hurt, and he received £10 for his bravery. He also appeared later on 'What's My Line?'

The exhibition has been running for over 20 years, after a £2.5million conversion to the bridge to allow visits to the walkways and Victorian engine rooms, and to set the exhibition up. Visitors can learn about the history of the bridge and how it was built, visit the walkways and level three of the North Tower, and visit the Victorian engine rooms.

The nearest underground stations are Tower Hill and London Bridge. By rail it can be reached from London Bridge, Fenchurch Street and Tower Gateway on the Docklands Light Railway.

1The closed headroom was 29 feet to cater for the high tide, which could be 25 feet higher than low tide.2Where the Spice Girls jumped across the bridge as it opened in a double decker bus.3The Millennium Bridge only stayed open for three days before closing for 20 months to stop a worrying 'sway'.