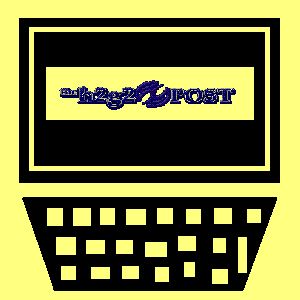 It's a funny old universe. If you hang around long enough, you'll run into just about everybody. And everything. Sometimes with a bang.

On a recent stay on the lovely, if overpriced, planet of Betamax Delta, I had a run-in with a very sinister character, and may - just possibly - have taught him a salutary lesson.

But if I did, it was all because of you people...the geniuses at the H2G2 Post.

Well, let's begin at the beginning, shall we?

It was a rather cloudy day – cloudy in the way massive dust storms tend to be cloudy – and to escape the choking sensation I ducked off the streets of Nueva Hysterica and into what I thought was a café con leche1 bar, but which turned out to be an up-scale auction house. After stumbling down a few steps and knocking detritus out of my hair, I took a look around.

Imagine, if you will, an emporium out of Earth's 19th Century – a vaulted ceiling, heavy, ornate hangings over massive stone, vitrines of polished wood and glass showing attractive objects from around the universe – presided over by dignified gentlemen in side whiskers, frock coats and top hats. All right, the gentlemen tend to be rather more pinkish than is fashionable on Earth, ranging in tone from peppermint to mauve, and the side whiskers are scaly and the frock coats made of Arcturan moleskin, but their air of elegant condescension would have pleased Dickens. In one corner, I spied some fine artefacts from the Early Ivar Period of the planet Ikea, and was soon lost in contemplation of the wonderful wares.

As I moved from section to section of goods being offered for auction, I noted that some pre-bidders had listed their first offers to let other prospective buyers scope out the competition. On several lots, I noted the (to me) high prices and thought, 'Too rich for my blood.' I also noted, beside each of these bids, a symbol instead of a name: 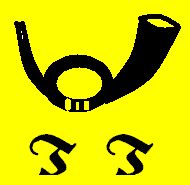 I scratched my head. 'T.T?' I thought. 'Surely the ancient family of Thürn und Taxis has not ventured out this far? Whoever they are, they're determined to outbid everyone else.' I continued strolling, until I was stopped as if by an invisible policeman2.

There, under the notice, 'Lot 42' was a very familiar object under the now-familiar T-and-T sign. Lot 42 consisted of a cheap formica table on which rested in solitary splendour an old laptop computer, circa Earth 2000. You knew it was Earth – where else would one find such unattractive plastics? More to the point, where else could one find Windows XP?

And there on the screen was a familiar logo:

I gasped. Some foul villain was attempting to SELL The Post? Such effrontery had not been seen since the president of the Pleiadian Cartel had run a hostile takeover of the Orion Belt on the grounds that 'it set off her eyes so nicely'. I was stunned.

Quick action was called for. I started pushing buttons, humming to myself, and had soon assembled a suitable selection. Then I stopped humming and started accosting prospective buyers.

'Sir or madam,' I said, 'I'm sorry, I'm not sure how your species bifurcates. Have you taken a look at this item?'

'Ooh! Loverly!' cooed the feathered vision in motorcycle goggles and waders, doing a quick read of a whimsical historical account. 'I dew enjoy a good science-fiction tale.' I smiled.

'Spread the word,' I said. 'Lots more where that came from.' Soon the shabby table was surrounded by eager readers of all shapes, sizes, and species, each jostling to put digit, paw, claw, or (in one case) fin to keyboard and disclose the wonders within: the story of a sidereal event as seen from one's home planet, an illustrated bit of ethnography, a rare bit of art and humour3, an even rarer bit of real art.

'Oh, look, I've always wondered about that strange Earth drink,' mused a tall, superintelligent being from the Crab Nebula. 'And to find it described in such beautiful verse...' Others crowded in.

A distinguished-looking blue cephalophod harrumphed as he perused4 a particularly heated literary discussion. 'Is this what they call 'a reality programme'? Can't say I think much of it. How must it feel when one's work is subject to such hostile scrutiny?' and he peered at me through his lorgnette.

I cleared my throat. 'Rather uncomfortable at times,' I admitted. Other sentients were clamouring for their turn at the marvellous machine and its marvellous content.

As they continued reading and chattering, I caught sight, out of the corner of my eye5, an utterly sinister figure6: 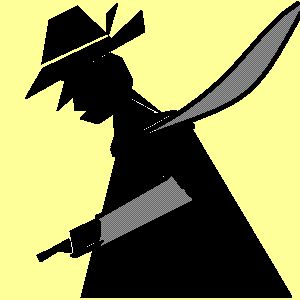 I kept an eye on him while garnering further appreciative remarks: 'Oh, how interesting - does anyone know what a cabbage is?' I explained. ' Where in space-time is Caledonia' I elucidated. ' Why in the name of fourteen gods are those men wearing skirts7?' I shrugged.

Much was made of two fascinating personal accounts - one from the point of view of a soldier, one from that of a young girl. The consensus was that Earth had a fascinating history, that Earth's people were right to publish a guidebook, and that this Lot 42 journal must be worth – in short – a lot of moolah.

At this point the sinister figure could stand it no more. He stepped out of the shadows with a swish of his cape. 'Stop!' he croaked hoarsely. 'I am the Prince of Touring Taxis, and I WILL have that collection for my very own!' He stretched himself to his full, sinister height – as he came up to my shoulder, I suspect it was about 4'9" – and practically shouted (as best he could): 'I will outbid you all! The H2G2 Post shall be mine!'

There was much grumbling and complaining at this – imagine the word 'rhubarb' repeated in a grumpy tone of voice in about 200 different languages – but I held up my hand for silence. And, not surprisingly, got it – that course in Stage Gestures has paid off over the years.

'My dear Touring Taxis,' I admonished. 'In addition to being rude, crude, and badly dressed, you are attempting the impossible here.' I waited for the breaths to bait. They obligingly baited8.

I smiled. 'I draw your attention to THIS PAGE.' I pointed to a clause in the lawyer-speak. 'You may not copy, reproduce, republish, disassemble, decompile, reverse engineer, download, post, broadcast, transmit, make available to the public, or otherwise use bbc.co.uk content in any way except for your own personal, non-commercial use.'

As Touring Taxis slunk away, defeated, I believe I heard him say, 'Curses, foiled again', although I cannot be absolutely sure. He may have been saying, 'My curtains need oiled again,' but that would make him from Pittsburgh. He didn't look like he was from Pittsburgh.

As the jubilant crowd in the auction house went off to celebrate the People's Victory with a cup of...well, whatever passes for coffee on Betamax Delta, although I swear one being was planning on a poetry-induced tea revolt, I reflected that the people of Earth are lucky.

Very few of them have sandstorms in the middle of town.

And almost all of them have access to a free web forum with a lot of talented – though eccentric – people on it.

1The coffee at these bars tends to be of the variety called in Romania cafe nes, with its chilled variant, the Greek frappé. I am usually so parched by the red dust of Betamax that I don't really care as long as it is wet and contains caffeine, that panacea of the galaxy.2The kind with a very tall bobby hat, white traffic-directing gloves, and a not-so-discreetly displayed truncheon.3On some planets, they would kill for that kind of humour. Literally. The Comics Wars of Plenaria VIII were hair-raising, not to mention head-removing.4I leave it to your imagination as to exactly how a cephalopod, blue or otherwise, harrumphs or peruses. There must be some work on your part, here.5Unlike a lot of my fellow auction-attendees, I have two. I feel obligated to point this out at this stage, in the interest of authenticity.6NOTE: He really is sinister. He doesn't only look that way because I can't draw.7This puzzles even aliens from the outer reaches of the galaxy.8All 'spelling mistakes' are deliberate.—ed.