I'd been very excited about my holidays this year— in fact I'd been planning it for the past 10 years, ever since the last eclipse I got to see. That one was way back in 1999, and I was in France at the time, just south of Paris. The skies had been pretty blue all morning, but frustratingly clouded over just on the point of totality. So I made it an ambition to see another eclipse one day, hopefully in better weather conditions.

A solar eclipse is an almost magical phenomenon, relying as it does on the fact that both the sun and the moon are about the same size when observed from the Earth. Every so often (about once every 18 months) the moon passes directly in front of the sun, casting a shadow on the Earth's surface. Sometimes it doesn't completely block out the sun, in which case viewers can see a partial eclipse, or in some cases an annular eclipse, where the moon is too small to completely cover the sun, and you get a ring of fire around the moon. ( I did travel to Iceland in 2003 in the hopes of seeing an annular eclipse at dawn, but sadly that one was completely clouded over. Yes I admit it, I'm a bit of an eclipse-chaser.)

But when the conditions are just right, viewers experience a massive black shadow sweeping across the world, rushing over them at 1,000 mph, as the sun winks out, displaying a show-off diamond ring just before it goes completely dark. Now, often eclipses are only visible from very inaccessible places, like the middle of the Gobi desert, or Siberia. The 1999 one was pretty special because the path of totality passed through a number of easy to reach and well-populated locations. And the one I've just had the enormous privilege of seeing was in the world's most populated country: China.

I was very enthusiastic about the prospect of visiting such an amazing country, whose culture and history stretch back for millennia, and whose more recent political re-invention and economic rise are just as fascinating. I even dutifully learned a few phrases of Mandarin, a notoriously difficult language which relies very much on the tonality of words. And I wasn't disappointed: standing on the Great Wall, I remembered reading about this place in picture books while I was a Primary School pupil, and it seeming impossibly exotic and far away. Earlier that same morning I'd stood in front of a modern marvel of engineering, the famous Birds Nest stadium, recognisable to billions across the world who'd been enthralled by last year's Olympic games.

Western tourists are still something of a novelty in this gargantuan place, and members of our tour group were constantly stared at, and frequently found themselves being stopped and asked to pose for photographs. But tourists from all over the world had flocked to Southern China to see this eclipse, passing over as it did the mighty metropolis of Shanghai, home to 25m people. We joined about 6,000 tourists, scientists and reporters at the Tainhuangping reservoir, high up the hills above nearby Hangzhou, a city which had been described by Marco Polo as the most beautiful in the world, back in the 1200s when it had been the Imperial capital during the Song Dynasty. The bus journey itself took us through some stunning scenery of bamboo forest, which had been used as the location for some of the filming of Crouching Tiger, Hidden Dragon. 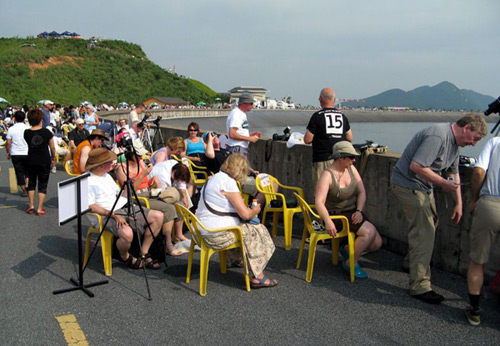 On 22 July, the day of the eclipse, we'd set off early in the morning, and the hotel had provided a packed picnic breakfast of a boiled egg, an apple, a banana and a yoghurt. We reached the destination at about 8 am and found our allotted site and settled down on the plastic chairs to begin the business of setting up cameras and telescopes, and trying out our eclipse glasses. I'd fashioned a Blue Peter style solar filter (thank you Winnoch!) for my camera out of special paper (at £17 for an A4 sheet it seemed an expensive way to buy tinfoil), but it wasn't giving very crisp and clear footage. So I concentrated instead on capturing the excitement of the event.

Me, I always feel a rush of adrenalin at first contact, when the moon takes its first tiny 'bite' out of the sun. For me, this is proof positive that the magnificent spectacle is actually going to happen. The morning had started cloudy, and there had been lots of anxious biting of nails and chewing of lips, but the clouds parted and we had some great clear skies for 20 minutes or so. Then the clouds reappeared and we all got a bit nervous, crossing fingers and hoping that totality wouldn't be covered in cloud. The sky behind us got darker and darker, turning an eerie purply-orange on the horizon. Birds flew back to their roosts. And at just before 9.30, the sun rewarded our faith with the most beautiful diamond ring effect, as a cheer went up from the crowd and everything became midnight dark.

This was the longest eclipse of the 21st century, and at almost 6 minutes long everyone had plenty of time to stand in awe at the wondrous sight of the black dot where the sun should be, before roaring and applauding as the sun re-appeared again on the other side. It's amazing how even the tiniest sliver of sun completely lights up the Earth. I'd forgotten the old tradition of having something to celebrate this point, 3rd contact, but the group of guys beside us, including Pete Lawrence, one of Sir Patrick Moore's assistants, hadn't, and were cracking open tins of beer, their broad grins as wide as their faces.

For those of us experiencing their first eclipse it was very moving: one bluff Yorkshireman declared himself to have been rendered speechless. And even those of us who'd seen one before gave this a 9 ½ out of 10!

The next few eclipses are back to their out of the way locations: there's one in 2010 visible from Easter Island, and a few others in the coming years visible from the middle of the south Pacific Ocean. But the one I'm really looking forward to is in 2017 in the United States. At least I'll not have to learn a foreign language!