Avocets - Wading Birds with Upcurved Beaks Content from the guide to life, the universe and everything 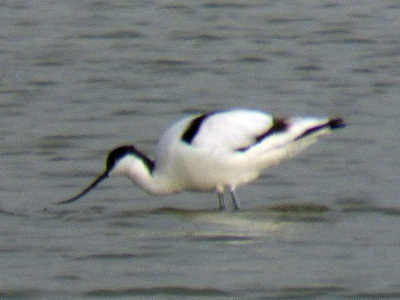 There are four species of avocet around the world. These elegant wading birds all have long, thin beaks that curve upwards and they are all members of the Recurvirostra genus ('recurvirostra' meaning 'recurved beak'). Members of the genus can be found on all continents except Antarctica, and they are worth looking out for if you are able to visit their wetland habitats.

Their upcurved beaks allow avocets to feed on insects and other invertebrates that live on or near the surface of lakes and ponds. This means that they are not competing with other wading birds, such as oystercatchers or godwits, that find their food further down in the water. Avocets all have long legs, which are pale blue in colour, and partly-webbed feet - they can wade in shallow or deep water, or swim for a time in deeper water. Whether wading or swimming, they sweep their beaks from side to side to capture food items.

All four avocet species have been classed as Least Concern on the International Union for Conservation of Nature’s Red List as they all have populations greater than 10,000 so are relatively safe from extinction. However, their wetland habitat is at risk from marsh drainage programmes and other human activity, and they are vulnerable to avian influenza and water pollution. Conservation efforts include the creation of nature reserves and the installation of artificial nesting rafts to encourage breeding.

The female lays up to four eggs and both parents incubate them for three to four weeks. When they hatch, the chicks are almost immediately able to walk, swim, and feed themselves by pecking for small insects in water. They can fly when they are about 42 days old. These birds may live to an age of more than 20 years old.

The Andean Avocet (Recurvirostra andina) is found only near lakes in the mountains of South America. Its body and head plumage is white, while its wings are black.

The Red-necked Avocet (Recurvirostra novaehollandiae) is found only in Australia. It has a red-brown head as well as the red-brown neck that gives it its name. Its wings are white with black tips.

The American Avocet (Recurvirostra americana) is found only in North America. The plumage on its body is white, but it has black bands on its wings and it has a pale brown head and neck in the breeding season. In winter, its head and neck plumage is grey.

The Pied Avocet (Recurvirostra avosetta) is the most common and widespread of the four species, as it can be found across Europe, the Middle East, Central and South Asia, and in Africa. Its plumage is mostly white, with black bands on the wings and black on the top of its head.

In the UK, the logo of the Royal Society for the Protection of Birds (RSPB) is a Pied Avocet. In the 21st Century, the birds are a common sight at RSPB nature reserves including Burton Mere in North West England, Exe Estuary in South West England and Conwy in North Wales. You may also see Pied Avocets in other places around the coast of the British Isles, including Titchfield Haven National Nature Reserve in the south of England. However, they have not always been so easy to find - Pied Avocets were extinct in the British Isles between 1840 and 1940. They returned in the 1940s when marshes in East Anglia were flooded, creating new habitat for them. The RSPB's protection has helped the UK population to expand since then.

Avocets are members of the Recurvirostridae family along with the similarly-elegant birds called Stilts. Stilts' beaks are not curved. The Black-winged Stilt (Himantopus himantopus - 'himantopus' meaning 'thong-footed') has black wings and white body. The population of these birds is very widespread - they can be found in Australia, North and South America, Africa, Europe, and Central and Southern Asia. The Banded Stilt (Cladorhynchus leucocephalus) is not so common, being found only in Australia. The Black Stilt (Himantopus novaezelandiae) is classed as Critically Endangered as it is only found on New Zealand, and the wild population is thought to contain no more than 50 birds. Captive-rearing programmes are helping to increase the number of chicks that survive to maturity, reducing the risk of the species becoming extinct.