Curlews - a Family of Wading Birds Content from the guide to life, the universe and everything 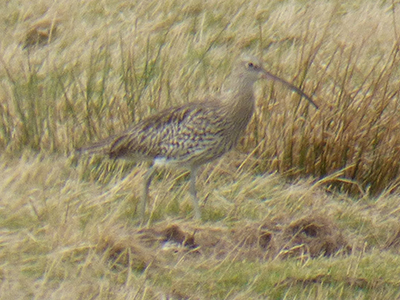 There are several species of birds in the family Numenius known as Curlews. Of these, all but one have seen their population decline in recent years. These birds face a number of threats, such as loss of habitat, being hunted for sport, disease and pollution. Conservation efforts are aiming to prevent further declines. Although their plumage is relatively drab, being brown and speckled, Curlews are distinctive birds as they all have downcurved beaks.

The Little Curlew (Numenius minutus) is the only Curlew whose population has been stable in recent years. They are classed as Least Concern by the International Union for Conservation of Nature (IUCN) - their population recovered from Near Threatened in the 1980s thanks to their grassland habitats gaining protected status. This species breeds in East Asia and migrates to Australia for the winter. They eat seeds and berries, plus insects such as grasshoppers, weevils and termites. They are the smallest of the Curlews, being only about 28-32cm long. Their bills are relatively short and only slightly downcurved.

As you might expect from its name, the Long-billed Curlew (Numenius americanus) has a downcurved beak that is very long. It is also classed as Least Concern by the IUCN but after recovering from Near Threatened status in the early years of the 21st Century the population is starting to decline again. These birds are only found in North America - they breed on prairie land in the northern states of the USA and migrate to wetlands in the southern states and Mexico for the winter. They use their long beaks to dig for earthworms, crabs and shrimps in mud. They also eat insects.

The largest of the Curlews is the Eurasian Curlew (Numenius arquata) - it is around 50-60cm in length and is named after its distinctive 'coureee' call. It breeds in northern areas of Europe and Asia including Scandinavia, Russia and the UK, and migrates south for the winter. Many that breed in northern Europe migrate to the coast of the British Isles, while those that breed in the UK migrate to the Mediterranean. Other Eurasian Curlews spend the winter in places such as the coast of Africa and Southeast Asia. These birds use their long beaks to dig into sand and mud. On the coast they find crabs and shellfish such as cockles. They spend summers in meadows, where they will feed on worms and insects.

The population of this species has declined by at least 25% in 15 years so it is classed as Near Threatened by the IUCN. European Union conservation measures such as bans on hunting, and legal protection of their habitats, are helping in some areas of their range. However, further action is proposed in relation to farmland management, and identifying other potential threats such as pollution, to help prevent further declines in future.

The Bristle-thighed Curlew (Numenius tahitiensis) is so named for the bristle of feathers situated just behind its legs. It is classified as Vulnerable by the IUCN as there are fewer than 10,000 birds left in the wild. They breed in a small area of Alaska and spend the winter in Tahiti, Hawaii and other islands in the Pacific Ocean. They are unique among wading birds in being unable to fly during the part of the winter when they moult their feathers, so this puts them at extra risk from predators and humans. Protection of their habitat, especially during winter, aims to stop the decline in the population.

The Far-eastern Curlew (Numenius madagascariensis) is classified as Endangered as its population is estimated to have declined by more than 75% in 15 years. It breeds in Russia and migrates to the coast of Australia for the winter, so the loss of habitat in East Asia for stopovers during the long journey is thought to be contributing to the decrease in numbers. BirdLife Australia is working with other countries to restore all the swamps and coastal habitats that these birds need, not just those in Australia itself.

The Slender-billed Curlew (Numenius tenuirostris), as its name suggests, has a slender bill. They are thought to breed in Russia and Eastern Europe and spend the winter in southern Europe, North Africa or Saudi Arabia. This species is classified as Critically Endangered by the IUCN as no more than 50 individuals are known to exist. The last official sighting was in 2001. An action plan is in place to protect its habitat, prevent hunting and encourage people to look out for these birds so that its population can be monitored closely.

The Eskimo Curlew (Numenius borealis) is classified as Critically Endangered (Possibly Extinct) by the IUCN as no more than 50 individuals are known to exist and they were last officially recorded in 1963. They are only slightly larger than the Little Curlew. They are thought to breed in Canada and migrate to Argentina. The population declined severely in the late 19th Century and never recovered.

The Whimbrel (Numenius phaeopus) is related to the Curlews. It is classified as Least Concern but its population is also decreasing, especially in North America. Whimbrels can be found in many places around the world as they breed in Alaska, Russia, the Nordic Countries and Scotland and migrate to spend winters at the coast in North and South America, South Asia, Africa and Australasia. Their habitats in Europe are protected by law, and research in the UK aims to increase food supplies and nesting areas for these birds through careful management of farmland.

The Eurasian Stone-Curlew (Burhinus oedicnemus) is not related to the Curlews, but is so named because of its call, 'couleee', that sounds similar to the call of the Eurasian Curlew (but more high pitched). Stone-Curlews are large wading birds with short, straight beaks.

Curlews are in the same family but not the same species as the Curlew Sandpipers (Calidris ferruginea). These small wading birds are so named because of their downcurved beaks.