Weevils in Your Flour? Pests in your Pasta? Content from the guide to life, the universe and everything 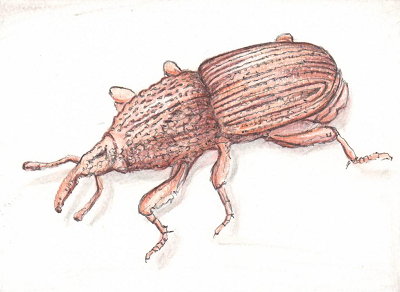 You've just opened that bag of flour, only to discover that little bits of it are moving. What on earth do you do? You've found creepy crawlies in your cereal and you don't like it. Who would? What do you do when you find your food cupboard contains wildlife? How do you get rid of these storage pests, and will they do you any harm?

The Entry is meant to reassure you and give advice on the best way to handle this type of food pest infestation, how to get rid of weevils and flour beetles, and to prevent them coming back.

Weevils that live in flour are known as grain or wheat weevils. Their official name is Sitophilus granarius. This weevil is a pest, dark brown in colour, which has infested grain since ancient times. It is commonly found in many continents and has a life cycle entirely dependent on being in a place where stored cereal, especially wheat, is kept. It is not a very strong or resilient creature; if put outside it would perish, unless it had access to stored grain. Its mouth parts are not terribly strong, so it wouldn't do very well even in a field of growing wheat. As can be imagined, this pest has become adapted over a long period of time to living in the easy conditions alongside humans, who grow, thresh and grind flour to make it palatable for both themselves and the sneaky weevil pests.

There are other little creatures that inhabit our kitchen food cupboards too, and depending on which part of the world you are living in, you will find that there are similar, but different species sharing your liking for processed grain. The most common ones are the red flour beetles and the confused flour beetles. These are dissimilar to the grain weevil, being a more reddish-brown colour and a true beetle shape1, but like the weevil, they are harmless if annoying pantry pests.

There is another pest, the flour mite, which is very tiny indeed, and hard to spot until you have an infestation. Flour mites are both troublesome and unwholesome; they can cause serious harm to your health. Although you may not be able to spot the mites themselves, you will notice the flour becomes covered in a coating of light-red dust, and will taste bitter. Do not eat flour if you suspect it has a flour mite infestation, as it can cause allergy and stomach problems.

Sitophilus granarius is a small (3-5mm) browny black or dark grey-coloured insect. It is sometimes known as the snout beetle, the true weevil of the Coleoptera order (beetles and weevils). It has a long snout, which is its most distinguishing feature. Adult female weevils can lay many eggs, hundreds in fact. The eggs are laid in wheat grains or products such as flour where they hatch as tiny larvae, then pupate before finally emerging as adult weevils.

Their life cycle is completed within a matter of a few weeks (30 days) in summer temperatures, but can take up to six or so months in the winter. Below 18°C the weevil is comparatively dormant. Above these temperatures, it completes the life cycle much faster.

The weevil does not fly but can walk long distances to find a mate.

Both these beetles prefer flour to grains of wheat. Their life cycles are very similar to the weevil, and they can produce many offspring in a few weeks, depending on the ambient temperature. The warmer the climate, the faster they breed and the more prevalent they are.

No, so don't panic2. If you find them, you should dispose of the weevily flour, but in dire emergencies you can spoon out the obvious weevils from the top of the packet and not worry about poisoning yourself. This is an option when you might otherwise starve, or not be able to make the gravy for hungry dinner guests. Just don't tell the squeamish among those you're going to feed. If weevils were harmful, humans throughout history would probably have starved in much larger quantities than they have done. Ships' crews would have found life even crueller, as their bread ration (twice baked bread, known as ship's biscuit) was often infested with weevils.

We're not actually recommending that you eat contaminated food, it's just that if you find some swimming in your Weetabix, especially if you've already eaten half, you don't need to visit Accident and Emergency.

However unpleasant it may be to find your food is crawling, weevils and flour beetles do not sting or bite, nor are they poisonous.

How Did They Get Into My Kitchen?

They most certainly didn't arrive from outdoors. There are many, many species of weevils, such as the Boll Weevil3, that do live outside, but they are not the sort that like to live in flour bags. The way that flour weevils and beetles have found their way to your cupboard is because they were already in the flour, or other wheat stuff, before you bought it. Flour has a shelf life, and once you exceed it, this is when you might begin to notice the weevils. Of course, another factor is the temperature at which your flour is kept; anything below 18°C will lessen the chances that the weevil will reproduce. Warmer temperatures encourage the beasts. Some such as the flour beetle require a minimum temperature of over 15°C in order to thrive. Cooler temperatures for storage mean that you will have fewer problems.

Once they are in your kitchen, then unless you are very careful, they will keep coming back. Not only do they like flour, they like all sorts of other wheat-based foodstuffs, such as cereal, pasta, couscous, biscuits and crackers. Anything that has a long shelf life and that you don't eat before noticing you have a problem will be attacked and invaded. Although they won't like it outside in the cold, once they've found a little corner in your warm, humid food cupboard, they are quite well adapted and persistent.

So What do I do to Get Rid of Weevils?

Getting rid of them is quite easy, but you will have to be ruthless and throw away any packets of cereal, flour, biscuits etc that can possibly have been in contact with the source of the infestation that you first noticed.

If you discover them in a packet of wholemeal flour at the back of a cupboard that you forgot to use, don't just throw this one bag away; the adults will have crawled around and left their offspring in hidey holes, and you will have more spoiled food in the future.

Take action, and throw out all sources of wheat, take out all the contents of your cupboards and scrub the shelves on both sides, top and underneath, wash the sides of the cupboards thoroughly. You may wish to use bleach in your water, but if you do, please wear rubber gloves. If you have a steam cleaner, you may like to steam-sterilise the corners and nooks and crannies. If you use shelf paper, throw it away and replace with new once the shelves are dry. Remember, the weevils and beetles will most likely have made holes in your packets, and any dust from the foodstuffs that has escaped onto your shelves will be harbouring the next generation of pests.

When disposing of the contents of your cupboard, you should be very quick and ensure that all the old food is double-wrapped immediately and taken outside of your house and placed, without delay, in the garbage. It would be absolutely fine to add this to the green waste, if your rubbish collection allows food waste to be added. Alternatively, you can add it to your own compost bin – but make sure that it leaves your kitchen before the little blighters have time to escape and find their way into new food sources.

Thoroughly wash any storage containers you used and will re-use. If you have a dishwasher, run them through it on a hot cycle. If not, or if the containers are not dishwasher proof, wash them in hot water and rinse and dry carefully.

Do not apply insecticide spray to cupboards where food is stored. Hygiene is the answer in keeping your pantry and food storage areas free from pests.

How Do I Stop Them Coming Back?

Even if you follow all the steps above, you will likely find that weevils appear again in your flour. The thing to remember is that weevils have been coexisting with humans for many thousands of years and are not likely to give up easily, so you have to be proactive as well as reactive.

Next time you buy flour, make sure you have some airtight containers to store it in. Otherwise, rotate your flour so that you don't leave opened flour too long without it being used up. Keep all other foodstuffs in storage containers too. Check that opened packs of cereal such as breakfast cereal are also used within a short time.

One tip is to freeze new flour as soon as you buy it. Put it into the deep freeze inside an airtight container, to stop any condensation making the flour damp, and freeze for three days4. This will kill any harbouring weevils or their eggs before they have a chance to continue their life cycles and make new generations in your cupboards.

If you follow all this advice, you may find that you no longer need to end up throwing a lot of food away in future years, nor be shocked to discover you are the owner of weevily food.

1Like a tiny ladybird, but brown all over.2It had to be said, this is the Hitchhikers Guide to the Galaxy, after all.3A major pest of cotton growers.4This tip can be applied to other food such as nuts, which can be attacked by other pests, such as mealmoths.