Edible Nuts Content from the guide to life, the universe and everything 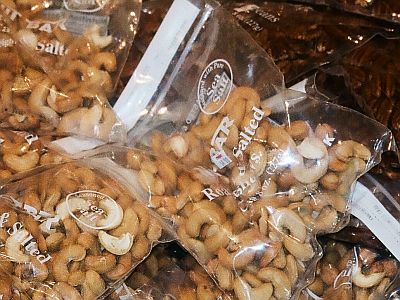 Open the shells, and you shall have the meat;
they here are brought for you to crack and eat.
– John Bunyan1

During the Christmas season, people often have a bowl of mixed nuts set out in their shells with a nutcracker and nutpick2. Other times it is more usual to obtain the nuts already shelled. Among the many different types of 'nuts' commonly sold, some would be classified by botanists as being something else other than a nut. For the purpose of this article we will be considering only those nuts commonly consumed as food.

Now characterised by some as a super-food, nuts are chock full of healthy stuff. Nuts have been shown to have protein, fibre, phytonutrients, Vitamin E and selenium as well as certain plant sterols. However, nuts are also one of the top causes of anaphylactic reactions. It's for this reason that most food manufacturers have to say whether packaged foods contain nuts, traces of nut or have come into contact with nuts in some way or other. In 2003, the FDA3 approved the following health claim for almonds, hazelnuts, peanuts, pecans, some pine nuts, pistachios and walnuts.

Scientific evidence suggests but does not prove that eating 1.5 oz [40g] per day of most nuts as part of a diet low in saturated fat and cholesterol may reduce the risk of heart disease.

Chemists might also want to look closer at the elements these nuts contain: things like calcium and radium or zinc, copper, and selenium.

The sweet almond Prunus dulcis is the central kernel of a drupe. Almonds may also be sold honey-roasted, blanched, ground or flaked. There is also a bitter almond which contains small traces of hydrogen cyanide. While this is unpleasant to eat raw, it is often used in cooking. Bitter almonds, when mixed with normal almonds in the right proportions, provide the delicious tang in macaroons and amaretti biscuits. Almonds are gluten free and high in calcium and magnesium needed for strong bones, as well as containing many other nutrients.

These nuts Juglans nigra L. are often sold ready-shelled. If picking these yourself you should wear gloves, and those gloves will inevitably turn black when you take off the husks. Black walnuts have high levels of manganese4 and plenty of polyunsaturated fats as well as omega-3 and excessively high levels of omega-6 fats5 which help preserve the elasticity of blood vessels.

Grown in the jungles of South America, this rich, mild-tasting nut is a special treat. A one ounce serving of brazil nuts has about 200 calories and a full day's supply of selenium6. The root system on this tree also concentrates radium making these nuts slightly radioactive7.

Originally from Brazil, seafarers have transplanted these to equatorial countries around the world. The Cashew tree will put forth a fruit, and the cashews can be seen protruding from the bottom of this fruit while they ripen. Cashew nuts have a sweet, buttery flavor and contain about 48 percent fat. It also has a very high amino acid score meaning it can be a great source of protein.

Sweet chestnuts (Castanea sativa) should not be confused with horse chestnuts (Aesculus hippocastanum), also known as conkers, which are not edible. When seen on the tree the outer husk of the edible chestnut is more fuzzy, while the conkers have a spiky husk. Once the husk is removed, you will note that sweet chestnuts will have a point on one end; conkers won't. When roasting the edible nuts, remember to make a small cut in the outer skin beforehand. This lets moisture escape so they don't explode in the oven. Chestnuts are the only common nut containing Vitamin C. They also have many other nutrients.

Unless pre-cracked, this largest of nuts may be full of liquid. To drain, find the 'eyes' and punch or bore a hole. In young coconuts this stuff is good to drink. After draining off the liquid, the nut will be less messy to open. As for nutrition, coconuts have phytosterols,and fibre but little else you want, and they are full of saturated fat. Coconut meat is often grated and used in candy or cookies.

These nuts, Juglans regia, first appeared in the UK during the time of the Romans. The name came from the Old English 'walhnutu' which means 'foreign nut'. Since the walnut was brought to Britain by the Romans, they were therefore considered foreign nuts. Norse and German had similar spellings. It is no coincidence that Wales starts with the same three letters - the name literally means 'land of the foreigners' in Old English, which is ironic, since the Welsh were there before the English arrived. Also known as Persian walnuts, they have a thinner shell than their American cousin, the black walnut. However getting them out of the husk will still stain your hands, unless you wear gloves. These nuts grow in many nations, both above and below the equator. English walnuts have plenty of manganese and copper.

In some parts of the UK and France Corylus maxima are called filberts because they are harvested around St Philbert's day. Most hazelnuts sold today come from the nation of Turkey. They are eaten straight from the shell, used in nut candy or coated in chocolate. Alpine monks once used to crush hazelnuts and add this to coffee. Today there is a wide market for hazelnut coffee. If your tree only seems to be providing green nuts, or you see a lot of empty shells, then you might want to ask the question 'Who shelled the nuts?' Hazelnuts are also a good source of manganese, vitamin E, and mono-unsaturated fat.

Some types like the shellbark or shagbark are quite edible. However, very few places sell them. If you are out looking for them growing wild, the best time to look is after the first frost. When ripe, the thick outer husk is easily removed showing the hard, white, inner shell. Some hickory nuts, like the pignut or bitternut, are best left to the squirrels as they have a bitter taste. Over three-quarters of the fat in a hickory nut is mono- or poly-unsaturated. Hickory nuts are also a good source of phosphorus and magnesium.

Some people in Africa seem to enjoy getting their daily fix of caffeine by eating Kola Nuts. Actually, most are chewed but not swallowed. Grown on the Cola tree, Cola nitida, some world markets sell the stuff ready-ground into a powder. It is also a prime ingredient in Cola beverages.

Primarily grown in Hawaii and Australia, this nut was named after Dr John Macadam (1827-1865). One researcher hit a macadamia nut with a hammer and nearly took out his neighbour who was 20m away with the ricochet. The shells are very, very hard and nearly spherical. It was not until the 1950s that someone found a way to make them commercially profitable. The macadamia is native to the rainforest of north-eastern Australia. It's the only significant food crop to originate there. Macadamia is a rich source of manganese.

The pecan is most often associated with the American state of Georgia which grows 50% of all pecans in the US. It is often used in candy, cookies, and Pecan Pie. Also note that pecans are a source of zinc, copper,and manganese.

Toasted kernels from the Stone Pine are readily available. Some also cook with pine oil. Pine nuts are rich in Vitamin K and other nutrients. Over-consumption can give the eater a bitter taste in the mouth. In some individuals this condition has lasted for several weeks afterward. This is known as Pine Mouth. The condition known medically as metallogeusia is a relatively new condition. One source8 speculated that certain non-edible varieties of pine nuts are being passed off in the marketplace as the edible variety.

These nuts are often shelled and eaten one by one. In the 1940s, James W Parkinson of Philadelphia, Pennsylvania created pistachio ice cream, which is still very popular today. Pistachios are also a good source of zinc.

These legumes are not true nuts but are usually treated as if they were. Some people have an allergic reaction to peanuts. If you have no problem with them, you might like them, as George Washington Carver did, in peanut butter. Some will even put crushed peanuts on an ice cream sundae. Peanuts are full of protein, niacin, and other nutrients.

1The Pilgrims Progress Part II.2A single-pointed metal pick, used for getting the kernel of a nut out of its shell.3US Food and Drug Administration.4Manganese is needed for hormone function and to create enzymes for protection against damaging cells.5Some research suggests a ratio of 4 parts omega-6 to 1 part omega-3 would be healthy but many cooking oils drive the ratio much higher leading to unhealthy levels of omega-6.6Selenium has a variety of functions. It helps make special proteins, called antioxidant enzymes, stimulates production of antibodies, is known to boost your immune system and is said to protect the cells against heavy metals.7 While these may contain 1,000 times the normal radiation found in food, there is no evidence of anyone being harmed by it.8 ABC News Medical Unit 7 July,2010.