Who Shelled the Nut? Content from the guide to life, the universe and everything 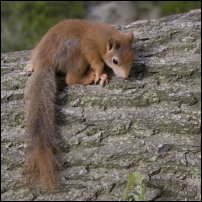 Hazel trees are easily found in woods, hedgerows, even gardens, in the UK. But their nuts are seldom found on them these days, except when they're still green and inedible. This wasn't always the case. They were a significant winter food source to some of our ancestors. So who's nicking the nuts? There are plenty of empty hazelnut shells scattered around.

Clues of two types can be found at the scene of a nut swipe: first, the position of the empty shell; second, traces on the shell of the suspect's modus operandi for removing the inner nut. The closer in time the investigation is made to the time of the heist the better, as the detail of these traces will weather fairly quickly.

The Usual Suspects and Their MO

The grey squirrel is the most likely nut-varmint. It's the grey squirrel that has made the fully ripened hazelnut such a rare sight in the wild. Being able to digest the nuts while they're still unripe, the squirrel gets a head-start on anything other than the nut weevil. A 'squirreled' nut is broken in half; a hole has usually been gnawed at the top; then the shell levered apart, leaving jagged edges. A youngster might just gnaw all over the shell, hoping for the best, however. In nutshell forensics, it's always going to be a problem that the individual suspect may be a learner, or that the initial suspect was disturbed and the job finished by another. Squirrels may drop the discarded remains of the nut anywhere. If it was hoarded first, the shell could be some distance from the nearest hazel tree.

Like squirrels, jays, magpies, woodpeckers and nuthatches lack finesse in nutshell opening. Pecking the shell until it shatters leaves split shells, half-shells, jagged edges and peck marks. Any peck marks that are left help determine the bird species by their size, pattern and shape. Woodpeckers go for weak lines down the nutshell, leaving vertical jabs in attempts to split the shell. Nuthatches try to hammer round holes and leave horizontal, curved peck marks.

These birds are likely to remove the nut to some distance. Jays stash nuts for future use. Woodpeckers have favourite natural anvils they take nuts to; shells will collect below. Half a hazelnut shell wedged in the bark of a tree has nuthatch written all over it, particularly if it's an oak. Nuthatches don't have favourite anvils, but they do have a preference for a spot on the lower trunk of an oak.

Of the tit family, only the great tit makes a regular habit of going for wild hazelnuts. Both tits and insects attack the nut in situ, being too small to remove it; the shell will be found still on, or under, the tree. They both leave small holes in the side of the shell. If a hole is less than two millimetres wide it will be insect-made, most probably by a nut weevil grub making its way out, having hatched inside. The mother nut weevil in its beetle life-stage bags a hazelnut for her offspring early, drilling into a soft, green, unripe shell with a relatively elephant-sized snout to lay the egg inside. This entrance hole heals over; the grub has to make its own way out when it runs out of nut.

A magnifying glass might be needed to distinguish between the activities of these mice and voles. Both go for the ends rather than the sides of the shell, making a roundish hole about a centimetre in diameter. The mice tend to make larger holes with neat parallel tooth marks around the inner rim. These gnaw marks show distinctly on the inner edge. The bank vole sticks its nose inside the shell as it gnaws, and leaves no mark on the outer shell surface. The two types of mice work on the side of the hole furthest from them, as they turn the nut in their paws, and leave rough marks on the outside surface. They all eat the nuts on the ground below the tree, and like to collect and hoard them.

Ah, dormice: of all the suspects this is the one that really requires nut forensics. For one, they're nocturnal. For two, they spend October to April in profound hibernation1. For three, they're inclined to curl up in a ball under a hedge and sleep away any dismal wet and cold weather in May to September in a torpor2. All of which means catching sight of them, let alone catching them in the act, is very unlikely. They're also arboreal - making them more difficult to see, even when active and on the job. Being tree-climbers, they tackle their hazelnuts on the branch. The shells may be found dropped anywhere underneath - they're unlikely to be in piles close to the trunk. Dormouse-eaten nutshells will have a neat, very round hole with gnawing tooth marks on the outside surface of the shell, in lines at an angle to the edge of the hole. The inner edge of the rim of the hole will be almost perfectly and distinctively smooth.

Hazelnut fanciers are not the only ones on the trail of the dormouse. Dormice are not ordinary mice3, and are undeniably cute. Dead cute: ginger, furry-tailed, blackberry-eyed, they make nests of honeysuckle bark. It has to be honeysuckle bark. They're famous, too - not C-list celebrity famous but A-list literary classic famous. It was a dormouse that Lewis Carroll's Alice found sleeping in a teapot.

They're also rare and becoming rarer, now inhabiting only half their 1885 reported range. You won't detect them in Scotland and there are very few north of the Wirral and the Wash. All this, and the fact that their habitat requirements make them an indicator species for wildlife-rich environments, means nature conservation types are on the 'dormiced'-nut tracks too. A 'dormoused' hazelnut shell found somewhere unexpected is worthy of notifying the local Wildlife Trust. However, you may find it takes the view that it's a privilege to hold a neatly holed shell that fed one of these elusive creatures and opposes any attempts to clap the handcuffs on. In fact, a special licence - the Dormouse Handling Licence issued by English Nature/CCW - would be required to take a dormouse into custody.

As in all forensics, dedication and patience are a prerequisite. Clear identification is not always possible. Detailed traces weather; culprits don't co-operate by always following expected habits; nuts may be attacked by more than one species. Sometimes a body of evidence is required, particularly with dormice. There should, unless you're dealing with a stashed nut, be more than one shell in the area with traces of the same species. One nutshell may not lead to a conviction, but several displaying traits of the same species is sound basis for a judgement.