The Shagbark Tree Content from the guide to life, the universe and everything 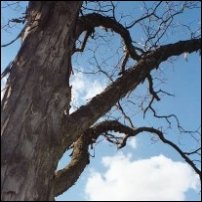 The shagbark (species Carya ovata) is a type of hickory tree, a group of trees related to the >walnut, which is found in eastern North America. These trees stand approximately 100 feet (30 metres) tall when mature. With a picturesque form and wonderfully flavoured nuts, this tree is worth watching for. The bark starts as a smooth surface but as it matures it buckles and separates from the underlying bark. The loose strips of bark, known as shags, make the tree easy to identify. Its distinctive appearance gave the tree its common name, and differentiates it from the pignut or shellbark hickory trees. The word hickory originated with the Algonquin tribe of Native Americans who also made these sweet nuts part of their diet.

There have been scattered reports of these trees growing in Asia; however, this is primarily a North American species of tree. Certain varieties of shagbark hickory have a resistance to cold weather, with reports of them withstanding -31°C in Quebec, Canada. The leaves and blossoms of other varieties, however, have been known to freeze easily.

Seedlings of the shagbark hickory may produce nuts after ten to 15 years. Some tree-nurseries have been crossing them with the pecan to create a hybrid called the hican. Maximum production is in trees 60 to 200 years old.

This sturdy-looking tree has a dull grey bark. The tree has compound leaves, usually with five leaflets. A deep green in summer, they turn golden in autumn. The leaves then fade to a dry dull brown when fallen. The shagbark tree does not need a sexual partner as both male and female blossoms are on the same tree. The male catkins appear first, then in late spring the flowers appear that will eventually produce the nut.

These trees grow from the St Lawrence Seaway to Texas. However they appear to prefer rocky soil, showing up on many steep mountain slopes - particularly those facing east or north, but not growing on the coastal plain near the Gulf of Mexico.

The nuts are small and hard but very sweet when ripe. The pignut hickory has nuts that look the same when the outer husk is missing but are very bitter to the taste. Shagbark nuts have two layers: an outer layer (dark in colour) that is much thicker than other hickory nuts, and an inner layer (light in colour) which has internal partitions like walnuts. Between these partitions you will find the kernels1 which are sometimes sold, like their close relative the pecan, as halves or pieces. Some people have been known to dry the outer husks and mix them with their charcoal to use in grilling.

Native Americans have used these nuts and a syrup made from its internal juice for many centuries. One early source in the South-Eastern United States wrote:

The Creeks store up the last (nuts) in their towns. I have seen above a hundred bushel of these... they pound them to pieces and then cast them into boiling water; which after passing through fine strainers preserves the most oily part of the liquid...and is used as an ingredient in most of their cookery
- William Bartrum 1792

Use of the Wood

The wood is quite dense and as a fuel in wood-stoves produces about 25 million BTU2 per cordA cord is 128 cubic feet (3.62 cubic metres).. The wood is also very resilient, but it decays easily if left without paint or sealer. Shagbark wood is also used for lacrosse shafts and baseball bats, also handles for hammers or axes and rungs for ladders or chairs and by museums for cask hoops and carriage shafts.

If someone tries mowing lawns under Black Walnut or Shagbark Hickory trees they had best know where their discharge chute is pointing. These are hard nuts to crack and will not be mulched by the mower. Instead they will shoot out of the discharge chute at high velocity. So a better idea is to rake the lawn first, then mow. Most would agree that aching arm muscles are preferable to bruised nuts.

1The edible portion of the nut.2British Thermal Units.