Quebec, Canada Content from the guide to life, the universe and everything 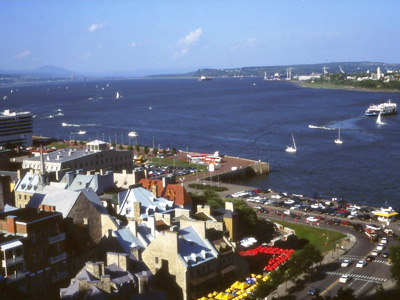 Quebec is the largest province of Canada, and the only one populated primarily by speakers of French. This phenomenon has caused no end of trouble for both Quebecois and residents of the rest of Canada, and is expected to continue to do so for the foreseeable future.

Quebec was the first part of Canada, indeed, the first part of North America, to be settled in any significant way by Europeans. This occurred after Canada was mapped with some rigour by the French explorers Jacques Cartier and Samuel de Champlain. They, and subsequent explorers and colonial authorities, demonstrated a rather ambivalent attitude towards the native Iroquois and others who had got there before them. The colonists alternately shot at the Iroquois and formed alliances with them against the British. This sort of behaviour is similar in spirit to the approach taken by modern Quebec and Canadian authorities in dealing with the same natives that remain there three centuries later.

When New France fell to British invasion in the mid-1760s1, all the colonists of means packed up and went back to France, leaving their less fortunate compatriots behind. The descendants of those left behind insist that they are not upset about this.

The British left in place much of the civil administration, the fiercely Catholic religious authorities, and the system of land distribution, which was founded on the principle that everyone should own a bit of the river, even if it led to plots of land a mile long and 30 feet wide.

However, they cleverly replaced the men in large hats who'd just boarded boats bound for Calais - with names such as Corbeil and Laval - with men in kilts - with names like Mackenzie and Alexander.

The predominance of English speakers in positions of authority in Quebec was deeply problematic for the Quebecois psyche, and the fact that the situation was allowed to fester for more than two centuries has not helped matters. Increasingly stridently nationalist leaders have come to power in Quebec in recent years, and the trend shows no signs of abating.

The predominence of fiercely-defensive French speakers can pose certain problems for the English-speaking visitor, who should bear in mind these vitally important rules:

The peak of Montreal's status came in 1967, when it hosted possibly the most significant World Fair. It enjoyed another burst of popularity when it held the 1976 Summer Olympic Games, but no major civic construction has been undertaken since, and the buildings constructed for those two events are firmly set on the road to quick and messy dereliction.

Montreal is worth visiting in the summer (which its residents call the 'festival season'). It hosts a world-renowned jazz music festival, a continentally-renowned comedy festival, the only Formula 1 car race in North America, and innumerable other cultural festivals throughout the summer months.

Montreal is so cold during the winter months3 that the Montrealers have built there the world's largest underground city. Many of the inhabitants can to go from home to work, the theatre, a hotel or a game of the Montreal's Canadian Hockey team without ever going outside.

No discussion of Quebec and its culture is complete without a discussion of Hockey4. Les Canadiens du Montreal - also known as The Habs, Les Habitants, or simply Bleu, Blanc et Rouge - are the most famous team, and have won the Stanley Cup5 more often than any other. They have many fans even outside of Montreal. Even in English-speaking Canada. Their greatest rival is Toronto, which has won the cup the second-most-often. The fans in Montreal are undoubtably the most fervent followers of the game, even compared to those in other Canadian cities, and playing for The Habs is almost every young boy's fantasy. Back in the 1950s the city suffered a riot, complete with burning cars and scattered violence, when their star player Maurice 'The Rocket' Richard was suspended from a key playoff game.

1 The precise date is difficult to pin down, because although the skirmishing rate declined over time, nobody is quite certain when it petered out completely, if, indeed, it ever has.2At least, ancient by North American standards.3All six of them.4Hockey is always spelled with a capital H, and is definitely never called ice-hockey.5This is the major Canadian Hockey trophy.