Decorative Nutcrackers Content from the guide to life, the universe and everything 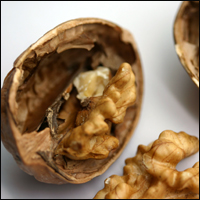 It has become something of a tradition to associate Christmas with the cracking of nuts for pleasure. But nutcracking isn't an easy task. It involves exerting great external pressure on a nut, generally one with an external shell that is not as delicious as the tasty treat inside. Human hands are not designed for this business1, so a tool had to be developed to aid in obtaining the delicacy - but one that wouldn't look out of place with all the other Christmas decorations. Hence, the development of the Decorative Nutcracker.

The Tchaikovsky ballet The Nutcracker has immortalised the device, most commonly depicted as a wooden figure with a jaw that unhinges (not terribly unlike an anaconda in that respect) to put things in the mouth that normally wouldn't fit when it's politely closed. The benefit of this is that you can insert nuts into the nutcracker's mouth and, with the use of a lever on the fellow's back, crush or crack them open. Some male members of the household may shrink back in fear at this process, as the nutcracker is often used as a threat against certain parts of the masculine anatomy.

I have one that makes mens' eyes water - unfortunately my husband broke it!
- an h2g2 Researcher

The decorative nutcracker is often shaped like a person - with some key differences of a purely functional nature. It generally has a head, arms, legs and a torso. Its mouth is perhaps a bit larger than the average human's though. In its normal position, the two parts of the mouth sit together. The mouth traditionally shows the teeth of the nutcracker, in the style of a somewhat manic or rictus grin. Only the bottom part moves as part of the nutcracking process. Through the lever that emerges from the nutcrackers back, the lower part of the mouth can be moved up and down from the resting position level with the shoulders, to just above the waist.

To crack a nut, set the mouth open to the lower position, insert the nut into the hole between the two halves of the mouth, and then use the lever to push the mouth closed again. In theory at least this will crack the nut open. More often than not, it's best just to hang your decorative nutcracker from the Christmas tree, or use it as a table ornament, because they are just about as much use as a chocolate teapot.

Wooden carved nutcrackers have existed since at least the 15th Century. Wood carving was a popular 'cottage' industry at the time - especially in Germany and Russia, where the decorative nutcrackers of today often hail from. Traditionally, nutcrackers are decorated as soldiers in a red 'parade' uniform (akin to those worn by the Prussian, Austrian and Russian armies during the 18th and 19th Centuries, or the Napoleonic Wars) and sport a long white beard. The combination of red outfit and white beard make it easy to guess as to why they became a popular gift or decoration at Christmas2.

Often, the nutcracker wore fancier clothes than their owners, even occasionally outfitted with a cape. However, the cape means you can't actually reach around to the lever to do any proper nutcracking. Indeed, many of the more expensive and finely crafted nutcrackers are purely ornamental and aren't very effective at cracking nuts. In such instances it's more appropriate to use a metal hand-powered nutcracker - if for no other reason than that you don't have to floss a kingly piece of wood out of your teeth afterwards.

Today, decorative nutcrackers can come in all shapes and sizes. Some are dressed up like other traditional Christmas figures - such as Santa, Snowmen or Reindeer. Beyond Christmas themes, there are tradesmen (butchers, bakers, candlestick-makers), sporting greats, pirates, and even Frankenstein's Monster! However, the large gaping mouth is a great visual aid for lampooning contemporary politicians and celebrities the world over, particularly those which people feel should have something shoved in their mouths so as they don't keep putting their feet in there.

1Some animals are capable of it, but owning a nutcracker is far easier than obtaining a wild creature and training it to open your nuts for you.2If you can't hazard a guess, they look like Father Christmas, okay?