Godwits - a Family of Wading Birds Content from the guide to life, the universe and everything 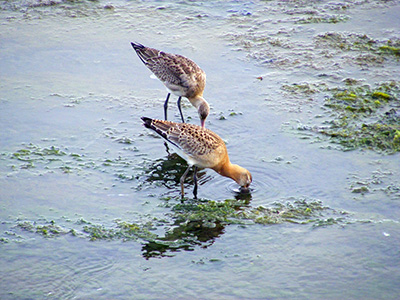 'Godwit' means 'good creature' and also sounds like the call of the birds. As you would expect from the names, Black Tailed Godwits have black tails and Bar Tailed Godwits have bars of black and white on their tails. Marbled Godwits have marbled grey and black plumage. Hudsonian Godwits are also marbled, but are much darker in colour than their cousins.

Their long legs enable them to wade in mud and their long beaks enable them to dig down into the mud to find insects, worms, snails and shellfish. The Bar Tailed Godwit also sometimes eats seeds and berries, and the Marbled Godwit will eat the tubers of aquatic plants.

In winter both Black Tailed and Bar Tailed Godwits have mainly grey colouring, although the Bar Tailed Godwit is paler, and in summer their head and chest feathers have an orange hue to them (the males being brighter orange-red than the females). Similarly the Marbled Godwit and Hudsonian Godwits are paler in colour during the winter and develop orange tints in summer, but the orange colour is not as distinctive and is restricted to their underparts.

The four types of Godwit are similar in relation to breeding. They nest on the ground among tussocks of grass. Each season around four eggs are laid and incubation is by both parents. The eggs hatch after about three weeks. Chicks can feed themselves after emerging from the egg and they fly at about a month old.

A Bar Tailed Godwit holds the record for the longest ever non-stop flight by a bird that has been measured - in 2007 one was recorded as travelling 11,500km (7,100 miles) across the Pacific Ocean from Alaska to New Zealand in nine days. More usually, Bar Tailed Godwits break their journey to New Zealand in South East Asia, but they still need to feed up before they set off on their migration as they travel thousands of kilometres between stops. The birds that pass through the UK from Alaska en route to South Africa similarly need to eat enough to sustain them at least as far as the stopover points in West Africa. Even with these challenges, Godwits over 30 years old have been recorded by the Royal Society for the Protection of Birds (RSPB).

In the UK, Black Tailed Godwits are a familiar sight in places such as Burton Mere Wetlands on the Wirral, and Bar Tailed Godwits can occasionally be seen in Titchfield Haven in Hampshire, amongst other places.

This picture courtesy of Richard Levett.