Oystercatchers - Distinctive Wading Birds Content from the guide to life, the universe and everything 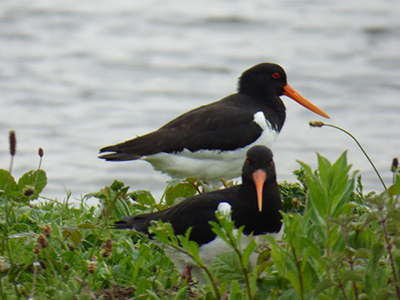 There are several species of Oystercatcher around the world. They are all classified within the Haematopus genus ('haematopus' meaning 'blood-footed' in honour of their pink-red legs1). The birds get their common name because Oystercatchers were observed catching oysters in 18th Century North America.

Their long legs allow them to wade in lakes, or in the mud left behind at the coast when tidal waters recede. The Oystercatcher beak is perfect for the job of locating and feeding on shellfish as it is long enough for digging in sand yet strong enough to prise open shells, or hammer through them. To cope with the wear and tear of finding food the beak grows around 0.4mm a day, in a way similar to human fingernails which grow at a rate of about 0.1mm a day.

Oystercatchers in the UK

The species most likely to be seen in the UK is the Eurasian Oystercatcher Haematopus ostralegus. Native birds can be found throughout the year on the coast all around the British Isles. In winter they are joined by migrants from Scandinavia and Eastern Europe. In summer during the breeding season they may be found further inland, in fields or on freshwater lakes. Their plumage is black and white - their heads and backs are black, their fronts are white, and they have white stripes on their wings and tail that can be seen when they fly. They develop a white band on their otherwise-black neck during the colder months of the year. They have dark pink legs, the distinctive orange-red bill and red eyes. Although they can eat oysters, they more often eat cockles and mussels. They also eat insects, worms and crabs.

In flocks, Oystercatchers can make a lot of noise, with their high-pitched 'peep peep' call able to be heard from some distance away. When finding a mate or establishing their territory in spring they will make 'display flights', swooping around slowly above a particular area. Groups of birds then run along the ground and call to each other. Most Oystercatchers mate for life. However, if a bird struggles to breed successfully with its chosen mate the pair may 'divorce' and find other mates to try again. Oystercatchers make nests on the ground, so they are vulnerable to being disturbed during the breeding season.

Each season 1-3 eggs are laid and both parents incubate them. The eggs hatch in 2-3 weeks. The fluffy grey and white chicks have to be taught how to dig for food and how to tackle shellfish. They are able to fly at the age of six weeks, but may be about six months old before they can feed themselves independently 100% of the time. The oldest Oystercatcher known to the Royal Society for the Protection of Birds (RSPB) was more than 40 years old.

Oystercatchers were once persecuted in the UK for eating cockles that could be sold commercially. However, it was found that Oystercatchers tend to choose larger cockles that are more likely to have had time to reproduce, whereas it is Shore Crabs that eat small cockles and hence have more of an effect on commercial populations. The Oystercatcher population managed to recover since the 1960s, but has been declining since the 1990s so they are classed as 'Near Threatened' on the International Union for Conservation of Nature’s Red List (IUCN).

More worryingly the Chatham Oystercatcher (Haematopus chathamensis) that lives in New Zealand is classified as Endangered, as there are only around 250 birds left in the wild. An even sadder tale is that of the Canarian Oystercatcher Haematopus meadewaldoi. Native only to the Canary Islands, it was last heard of in 1981 and by 1994 it was confirmed as Extinct by the IUCN. It was believed to have died out because of a lack of food and intrusion of humans in its coastal habitat.

1Some of the species' legs are a darker pink than others.