Titchfield Haven National Nature Reserve, Hampshire, UK Content from the guide to life, the universe and everything 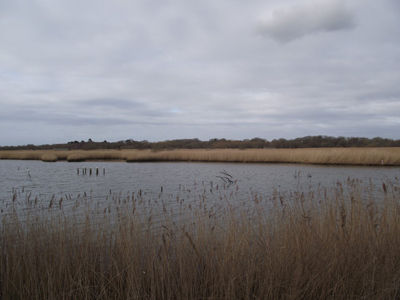 Titchfield Haven in Hampshire is a nature reserve encompassing 369 acres of land around the River Meon. It is owned and run by Hampshire County Council and is well worth a visit if you are interested in wildlife, wading birds and widgeon.

The entrances to Titchfield Haven are situated on Cliff Road in Hill Head, which forms part of National Cycle Route 2. Brown road signs1 help you to find the Haven by car. Public footpaths link the Haven with nearby towns and villages. There is a small car park for disabled people who have a Blue Badge, and more parking is available along Cliff Road. The Visitor Centre is wheelchair accessible, and the building includes toilet facilities. Once you enter the Haven, the hides2 all have ramped access but some of the paths are quite steep and rough in places - there is a concessionary ticket price and accompanying helpers are admitted free of charge.

The estuary of the River Meon was designated a Site of Special Scientific Interest (SSSI) in 1959, most notably because of its importance as a habitat for ducks including widgeon and teal. In the 1970s, plans were made to increase the diversity of the land and open the site to the public. Artificial islands were created to encourage more wetland birds, paths were added and bird hides were built. Titchfield Haven officially opened in 1976 and has changed a bit over time - in particular the Visitor Centre was opened in 1998.

The Visitor Centre contains a reception desk where you buy your tickets to enter the Haven. There is a small shop selling wildlife spotting books, bird food and wildlife-themed gifts. The Tea Room serves hot and cold food and drinks, including a wide variety of cakes. Artwork by local artists and photographers is on display in the Tea Room gallery - the exhibition changes monthly, and all items are for sale. 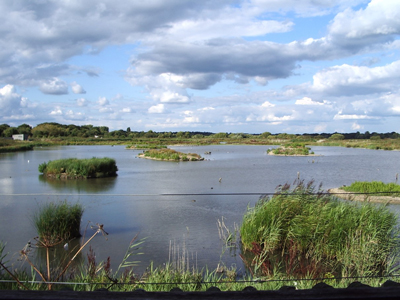 The Cottage Hide is situated just outside the Visitor Centre and anyone can go in without having to buy a ticket first. Bird feeders attract a variety of small birds including goldfinches and siskins so it is worth spending a short while in there.

Going through the Visitor Centre, you join the Boardwalk Trail, a boardwalk3 that takes you across marshy land. Shrubs and piles of wood provide habitats for insects and birds including beetles, robins and wagtails, and ponds attract frogs and other wildlife including water voles. Look out for the sculptures and fairy doors hiding in the vegetation. You may even see reptiles including common lizards and slow-worms basking on the boards.

The first hide you reach is the Suffern Hide, which looks out across the River Meon. If you're lucky, you might spot a kingfisher in the reeds. Posts in the middle of the waterway provide helpful perching points for cormorants and gulls while wading birds and divers might be searching for food in sheltered areas.

Following the boardwalk further along takes you to the Meadow Hide, where you may see cows and geese grazing, or spot other wet meadow birds including curlew and godwits. Birds of prey such as kestrel and buzzards may be hovering overhead.

The Knights Bank Hide marks the end of the Boardwalk Trail. It provides more views of the wet meadows and is also relatively close to the Frying Pan, a vaguely circular lake with the river forming its handle. You need to retrace your steps to go back to the Visitor Centre. A short walk along the shorefront, with the Solent and the Isle of Wight to your left, takes you to the other side of the Haven, where there are four more hides on the Scrapes Trail.

The Meon Shore Hide is closest to the Scrapes Trail entrance and offers views across the South Scrape and the North Scrape beyond that. The Scrapes are artificially created wetlands with a number of islands in them, providing habitats for birds including avocets, teal, lapwings and widgeon. For amateur birdwatchers, the islands are helpfully labelled with letters so people can instruct you more easily about where to see particular types of birds.

The West Hide is on the western boundary of the site, offering views across a wet meadow as well as giving you the opportunity to see hedgerow birds including firecrests and wrens.

The next hide on the Scrapes Trail is the Pumfrett Hide, situated between the North and South Scrapes and offering closer views of wading birds. To get to this hide, you pass Darter's Dip, a pond where dragonflies and damselflies are likely to be found darting around, or water voles may be feeding.

At the end of the Scrapes Trail is the Spurgin Hide, which looks out over the Eleven Acre Mere. It isn't just birds and animals that you will see on the trails - the marshland is home to mosses and lichens as well as shrubs, trees, and fungi such as the heart-shaped Scarlet Elf Cup. 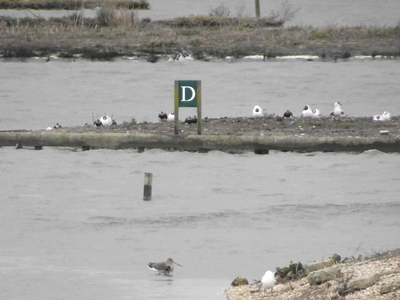 The variety of habitats within the reserve mean it is well worth visiting at different times of year to see the divergent birds and other creatures that are around. The winter months are good times to see kingfishers and gulls, plus the bittern. In spring you'll see teal and shelducks, and hear geese fighting for breeding territory. In early summer there may be moorhen chicks about as well as reed warblers and terns. Late summer sees snipe, godwits and lapwings exploring the wetland area. Autumn is a good time to see dragonflies and lizards basking on sunny days and you may see water rails and bearded tits.

Some rare birds find their way to the Haven occasionally and cause excitement on social media. For example, a greater yellow legs visited from America in the summer of 2015, and a penduline tit from Central Europe was spotted in December that year.