Goldfinches Content from the guide to life, the universe and everything 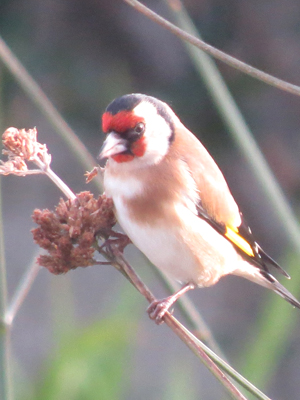 Goldfinches are tiny, colourful birds of the finch family, one of the most brightly coloured birds to be seen in Britain and Ireland. They are found throughout Western and Central Europe, with the exception of the very north of Scotland and most of Scandinavia. They are also found in coastal North Africa and the Near East; in Turkey, Northern Iraq and Western Iran. They are found in the summer in much of Eastern Europe as far east as the Urals.

They are sometimes called European goldfinches to distinguish them from the American goldfinch, a similar but much yellower bird. There is a variant bird, Carduelis carduelis caniceps, which is found to the east of the lands occupied by the goldfinch. This looks similar but has a different pattern of markings on its head. It is not considered a separate species because the two types interbreed at the edges of their territories.

Goldfinches are small birds - the adults are slightly smaller than a sparrow. They are about 12-13cm long and have a wingspan of about 21-25cm. They have light brown body feathers with a pale breast. The wings are black and yellow, with white spots on the lower back when folded. When the wings are opened to fly, they flash with large yellow sections. It is this that gives the birds their name.

Adult goldfinches, both male and female, have brightly coloured heads with red faces, black crown and back, and white sides. Juvenile goldfinches have plainly coloured heads, without the black, white and red markings, although their wings are still the same striking black and yellow.

Goldfinches live for a maximum of 11 years.

Like most other finch species, they have strong, stubby beaks, which they use to eat seeds and insects. In the countryside, they specialise in the seeds of thistles and teasels. The scientific name carduelis comes from the Latin  carduus meaning 'thistle' and an alternative name for the bird is 'thistle finch'. 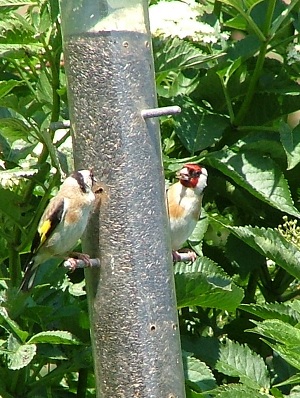 In suburban gardens, they are attracted in particular to birdfeeders with niger seed, which must be in special containers with very small holes. They also favour sunflower hearts. While at a feeder, the birds will stay put for a long while - each individual seed is so small that they must eat a lot of them to make a nourishing meal. While they are doing this, they keep looking around for predators. This is different from many types of bird who will grab a large mouthful and then fly away to eat it elsewhere.

Goldfinches have a very musical call, and they sing while they are flying. If you see a pair of brightly coloured small birds flying past and singing as they do so, the chances are they are goldfinches. Outside the breeding season, they can often be seen in small flocks, sometimes called charms.

Goldfinches in Popular Culture and Legend

In the past they were kept as cage birds because of their beautiful plumage and their musical song. It's illegal in the UK to catch and keep captive a wild bird, but you can keep a goldfinch that has been bred in captivity and has been close ringed with an approved ring.

There's a legend that the goldfinch's red face is because one bird attempted to remove Christ's crown of thorns during His Passion and was stained by His blood. Perhaps because of this, goldfinches were used in Renaissance religious paintings of Christ and His Mother as a sign that even as a child Christ had foreknowledge of His death by crucifixion.

There's an Irish tradition that the first bird a girl saw on St Valentine's Day was an indication of the type of man she would marry; if it was a goldfinch, she would marry a rich man. It's unclear what it meant if she saw a different bird from the previous year.

A very nice painting of a captive goldfinch was created by Dutch artist Carel Fabritius (1622-1654) and this became a crucial plot point in the Pulitzer-prize-winning 2013 novel The Goldfinch by Donna Tartt.

Vivaldi wrote a concerto for flute and orchestra called 'The Goldfinch'. It is RV 428 and is also known as Flute Concerto Opus 10 No 3 in D major. It features lots of elaborate trills which call to mind the singing of these charming birds.

1The third name in the scientific designation indicates a sub-species. Carduelis is the most common sub-species but there are a number of others.