Common Wrens Content from the guide to life, the universe and everything 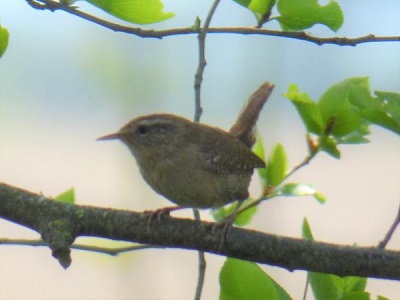 The Common Wren, scientific name Troglodytes troglodytes, is found throughout Europe, northern Asia, North America and even North Africa. It is the only member of its family in the Old World where it is simply called 'the wren', but in America, it is just one of 59 different types of wren, so it is known there as the 'Winter Wren'.

Almost the smallest bird in Great Britain and Ireland1, the wren is only about 10cm long and weighs only 9g. Wrens have a very chunky shape, being almost spherical, with a very pointy beak and a tail which is often cocked at an angle. The plumage is brown, with distinctive barring of cream and dark brown on the wings. This is very noticeable when the bird is in flight, but can still be seen when the wings are folded.

The wren is found everywhere in Great Britain and Ireland, from the centre of cities to the tops of mountains. It is very common, but not very well known, as it rarely comes out into the open, but stays under cover. It hops from one branch of a bush to the next looking for insects and grubs. Its pointy beak is good for getting creepy-crawlies out of cracks in the bark of trees. Wrens are often mistaken for mice as they hop around on the ground under bushes and shrubs. They eat mainly worms, spiders and insects, but will occasionally eat berries.

The wren has a very loud 'chick-chick-chick' call. This is normally heard coming from inside a bush. In breeding season, wrens will expose themselves more frequently, standing on fences and singing their equally loud warbling song.

The scientific name of the wren troglodytes translates as 'hole dweller'. Wrens build nests in holes and in thickets, where they are well protected. The nest is a hollow ball of moss and leaves, with an opening in the side. The male builds the nest and will often build more than one. In one recorded case, a male made 12 nests in one season. The female chooses one of the nests and stays in it. When the eggs hatch, both parents will busy themselves feeding the young.

If the male is lucky, he may attract more than one female and spend his time going backwards and forwards between two nests. While it is an evolutionary advantage to the male to have more offspring, this is offset by the fact that they will be worse fed because he won't be able to spend as much time looking after each nest. So while some males will manage two or even three partners, the norm is only one.

Wren populations are very variable. A bad winter can kill off nearly 90% of the population. But in a good summer, there can be a population explosion, causing wrens to become the most common birds in Great Britain. For example, the severe winters of 1962 and 1963 left the wren population severely depleted. Over the next ten years, 1964-1974, the population grew by a factor of ten, a growth rate unmatched by any other bird.

Being so small, wrens are very affected by the cold, so they will often roost huddled together, a practice which is uncommon with other birds. They also often nest communally to conserve heat; as many as 60 wrens have been seen entering a standard nesting box.

The Wren in Folk Tradition

In many traditional nursery rhymes, the wren is given the name 'Jenny Wren' and is female, but in the two most well-known traditions and stories, it is the male wren that is significant.

King of the Birds

The birds held a contest to decide who would be their king. Whoever could fly highest would be awarded the title. Everyone expected the mighty eagle to win and sure enough with his powerful wings he climbed up to a great height, outdoing all the other birds. It seemed that he had won. But as the eagle began to tire and started to come back down, a tiny wren appeared; he had been hiding in the feathers of the eagle's back. He fluttered a few feet higher and the eagle was too weary to stop him. So the wren became the King of the Birds.

The wran, the wran, the king of all birds
St Stephen's Day was caught in the furze
Although he was little, his honour was great
Jump up me lads and give him a treat.
Up with the kettle and down with the pan
And give us a penny to bury the wran
- A verse from the 'Wren Song'

There was a strange tradition in parts of Great Britain and Ireland of hunting wrens on one day a year - in Ireland it was St Stephen's Day (26 December). In parts of Great Britain the day was Christmas Eve, or Christmas Day itself. Gangs of boys called 'wren boys' would hunt and kill a wren. They would then dress up in fancy costumes, with blackened faces. They would tie the dead wren to a stick, attach streamers to it and parade around the town, knocking at doors. At each door they would sing the 'Wren Song' and people would give them money. When enough was gathered, there would be a big party and the wren would be solemnly buried.

The origins of this custom are unknown. There are various stories told, about the wren being punished for betraying a saint or some soldiers, but they all sound as if they were invented after the event. The custom appears to honour the wren as well as killing him, suggesting connections with the pre-Christian tradition of killing the King each year as an offering to the Gods. The mention in the song of the furze, a dark green spiky bush, suggests a link to that other pre-Christian symbol, the Holly.

Whether the Wren Boys are in fact connected with pre-Christian rituals or not, the custom fell out of favour around the end of the 19th Century. It was revived in many parts of Ireland during the 20th Century without the crucial element of the killing of the wren, and is now a popular amusement on St Stephen's Day.

From 1937 until 1956, the British farthing coin bore a picture of a wren. This tiny coin was worth one quarter of an old penny, and thus one 960th of a pound. No more farthings were minted after 1956 and the coin was demonetised2 in 1960.

America has 59 different species of wren, including the tiny Wood Wren, the Marsh Wren, the Cactus Wren and the House Wren. Australian and New Zealand wrens are unrelated to the Common Wren.

1Both the Goldcrest and the Firecrest are smaller.2Taken out of circulation.