Common Frogs in the UK Content from the guide to life, the universe and everything 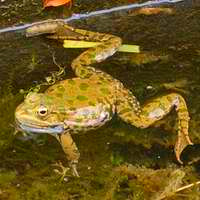 The common frog Rana temporaria is a species of amphibian. There are about 5000 different species of amphibians in existence. Amphibians are a class (a taxonomic grouping) of vertebrates (animals with backbones, including fish, birds, reptiles and mammals). Of these amphibians, a grand total of seven species live in the UK1 and two of these species are so rare as to be of no real relevance. In other parts of the world there are tree frogs, poison-arrow frogs, wood frogs, horned toads, cane toads… and so on. In the UK we have the frog and the toad. On the plus side, we may not have that many species but we do have a lot of individuals.

The common frog is found almost everywhere on the mainland. In the heart of Birmingham, a huge urban sprawl, frogs hop into kitchens on a regular basis, whilst the same species can also be found half way up Ben Nevis (the tallest mountain in the UK, though pretty titchy by global standards).

Common frogs are 'explosive breeders'. This means that once a year they mate and leave fertilised eggs in prodigious quantities. A single female can lay 1000-1500 eggs. Each egg has its own jelly 'shell' for protection and within this is a small yolk to provide nutrients for the developing embryo. The jelly shells are sticky, so that as the eggs are laid they stick together in clumps. The eggs are laid in water and over the hours after they are laid, the jelly swells and the clumps float on the surface. All amphibians breed in water even though most can live predominantly on land. It is this double life that earns them their name; in Greek, amphi means dual and bios means life.

The eggs of the common frog hatch after a few days and the tadpoles, as the free-swimming embryos are called, then feed on algae and other tiny plants. At this stage the tadpoles are fairly unsophisticated, tiny, wriggling creatures breathing oxygen dissolved in the water using gills like fish, but over the next weeks their physiology alters radically: they change shape and develop more complex internal organs, such as eyes and a brain. They switch from the easily available but nutritionally poor algae to the harder-to-catch but much richer food of small animals swimming in the pond. By this stage they have bulbous bodies with thin tails snaking out behind them. They are powerful swimmers and highly-efficient predators (though you have to be fairly small to be worried because they are only a couple of centimetres long).

Now the changes get really dramatic. They develop hind legs: proper legs with bones, muscles, toes, joints - the whole lot. Next they develop forelegs. By this stage they look very much like miniature versions of the adults, except they still have tails streaming behind them. They develop lungs and start to breath oxygen in the air as we do. The last thing that happens is that they lose the tails. They don't shed them; instead they re-absorb them, meaning that all the energy and nutrients they put into the tails can be used elsewhere in the body. This process takes weeks, but precisely how long will be governed by a number of factors, in particular temperature and food availability. In general, tadpoles in warmer, food-rich areas will develop faster than tadpoles in colder areas in which food is more scarce.

By this stage they are very obviously frogs, though probably no bigger than the top joint of a thumb. On warm wet evenings, they gather at the edge of the pond and under cover of darkness hop away into the undergrowth. For the rest of their lives they live on land, returning to water to breed, and sometimes for protection or to hibernate.

There Must be a Better Way

This might seem a rather primitive way to carry on, but as a reproductive strategy it has a great deal to recommend it. Amphibians are pretty sophisticated animals; they have to develop a bony skeleton, a central nervous system and a brain, as well as a circulatory system with lungs and a heart. All this takes time. Mammals such as humans or mice that develop similarly complicated bodies have to go to a great deal more effort. Mammals have to create 'ponds' in their own bodies, find a way of feeding the developing embryo, and go to all the effort of giving birth. The common frog is effectively outsourcing the complicated and energy-draining bits of reproduction to the pond itself.

The advantage of the approach taken by mammals is that they can protect their developing embryos, move them out of danger and physically defend them against many of the threats posed to them. Common frogs release their young into a hostile and unpredictable environment. Almost everything eats them: fish, insects, other amphibians, their faster-growing siblings. It doesn't get any better once they leave the pond, as shrews, birds, ground beetles and a huge range of other predators gobble them up.

There are a couple of ways, through evolution, that a species could counter this threat. They could make themselves taste nasty or even be poisonous. Many amphibians do this, but not the common frog, which instead plays the numbers game. Common frogs lay as many eggs as they possibly can in the hope that a few of their offspring will survive. It works (we don't call them common frogs for nothing).

Once they have left the pond, and assuming they survive, they might spend a couple of years growing bigger. There is surprisingly little known about what frogs get up to while they are just being frogs on land. It seems likely that they don't live too complex a life. They have no particular need to defend territories. They only need to find mates once a year, and thanks to another neat evolutionary trick (see below), they probably don't need to hunt. Since most of the more interesting behaviour of animals can usually be traced to one of those three needs it is perfectly believable that the normal behaviour of the frog involves sitting somewhere quiet and slightly damp. Just that.

The Other Neat Evolutionary Trick

In common with all amphibians, common frogs are what are sometimes called cold-blooded (more correctly termed ectothermic). This means that their body temperature is governed by the temperature of their environment (unlike mammals where temperature is governed by a sophisticated central heating system). The big advantage of being ectothermic is that, assuming you find somewhere reasonably cool and safe, you don't need to eat much and rather than hunting, you can get away with sitting and waiting for food to come to you. Warm-blooded animals, such as mice, need a constant supply of food because they keep burning calories to maintain their body temperature. If you need lots of food, you need to keep moving around and looking for it which means that you are more likely to encounter predators.

When the spring comes, the frog's behaviour changes radically. It is time to breed. There are a number of issues that need to be balanced; sitting around just being a frog is fairly low-risk, but hopping off to a nearby pond will increase the chances of predators grabbing you. If you get there too early then you will increase the risk even more. On the other hand you must breed otherwise you will at some point die and your genes will die with you. If you get there too late there may not be much of a choice of mates, or none at all. The males get there first. Males can breed more than once in a season whereas females cannot, so it is in the interests of males to turn up early, and in the interests of females to wait until there are plenty of males around.

It is first necessary to find a suitable pond, although common frogs don't have very sophisticated tastes so most ponds will serve. The male frog has to attract females, so he croaks. This carries risks with it. Frogs don't normally attract attention to themselves. To minimise the risk, the male sits in the pond with just his head above the surface. That way if there is a threat from above, he can duck beneath the surface. The croaking of a male attracts other males - for fairly obvious reasons - and so soon there can be large numbers of male frogs sitting at the edges of a pond croaking. It is a very distinctive sound, reminiscent of a distant diesel engine. Then the females arrive.

Mating for the common frog is a pretty energetic and rough business. As the female sheds her eggs, the male will shed his sperm and eggs will be fertilised. The optimum position is the male grasping the female around her waist from behind as his body then extends a little further than hers. This clasping arrangement is called amplexus. Of course it's never that simple; the female will be looking for a male with particularly favourable characteristics, not least because she only gets to breed once per year. Males can afford to be a little less discerning. A scramble ensues with males clasping females and other males trying to wrestle them off. In the end it all works out and the clumps of frogspawn float to the surface. The adults go their separate ways and their offspring begin to explore their new existence.

Are they Dying Out?

But don't let that relax you.

There are countless numbers of common frogs across the UK but then there are supposed to be. The common frog's evolutionary strategy relies on there being far more frogs than you can shake a stick at, everywhere. We can be pretty sure that there are fewer than there would have been 100 years ago because of changes in land use, not least the removal of farm ponds. Garden ponds provide an important habitat for them these days and the common frog is one of the very few wild creatures that all of us from the remotest moors to the most congested streets can share our habitat with.

It is very easy to take positive measures to conserve the common frog. The more ponds, in gardens, community centre grounds, university gardens etc, the more frogs there will be. There is anecdotal evidence that major environmental factors such as global climate change and acid rain may be threatening common frog biology, but it is not yet on the endangered species list, and with luck, never will be.

1These seven species are the common toad, common frog, palmate newt, smooth or common newt, great crested newt, natterjack toad and pool frog (although there is some dispute about the pool frog).