RSPB Conwy, North Wales, UK Content from the guide to life, the universe and everything 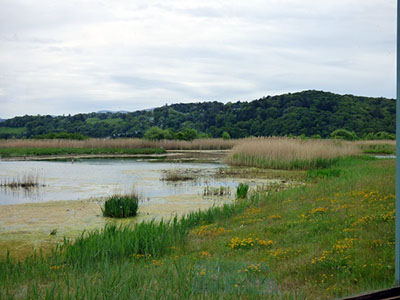 RSPB Conwy in North Wales is a nature reserve on the east bank of the River Conwy. It is owned and run by the Royal Society for the Protection of Birds (RSPB) and is well worth a visit if you are interested in wildlife and wading birds.

RSPB Conwy was created from the material that was excavated to create the A55 Road Tunnel between 1986 and 1991. The newly formed ground was landscaped to create a variety of wildlife habitats including lakes, grassland and reed beds. The reserve officially opened in 1995 and now covers 50 hectares.

The land around the reserve has been occupied for more than 4,000 years. The village of Glan Conwy, which was founded in about 500AD, is to the south of the reserve. The town of Conwy, which contains Conwy Castle dating back to 1283, is opposite the reserve, on the west bank of the River Conwy.

RSPB Conwy is easy to find by car, as it is situated just off the roundabout at Junction 18 of the A55. Llandudno Junction railway station is half a mile away, and Sustrans Cycle Route 51 passes nearby.

The Coffee Shop on another side of the entrance courtyard sells a range of hot and cold drinks, plus light meals, cakes and local delights including Welsh Rarebit, Welsh Cakes and Bara Brith. There is a bookcase containing second hand books for sale. Telescopes at various heights are available for everyone to enjoy, as the Coffee Shop has large windows providing great views across the small lagoon where a variety of water birds may be mooching. A bird feeder in a sheltered area can be seen through the side window, so you can also watch small birds such as house sparrows feeding while you eat your lunch.

Also in the entrance courtyard are: an education room, and the Look Out. The Look Out is a family-friendly hide, being an attractively-painted building with low window ledges and large glass windows, so children can enjoy looking at the birds in the small lagoon outside but do not disturb the wildlife if they get a bit noisy.

There are three circular routes that you can follow to explore the reserve. The routes are well signposted, but you can also request a map from the Visitor Centre with the routes marked on it in English and Welsh.

The shortest route is the Blue Tit Trail (marked in blue on the map). This is an easy trail of a third of a mile along a boardwalk. Listen out for reed warblers on the nearby reed bed and look out for the sculptures that are dotted around. The Boardwalk Viewpoint is a wooden screen with openings at various heights giving an excellent view of the small lagoon and the islands in it that provide a refuge for various birds including oystercatchers and gulls. The loop takes you back to the Visitor Centre via the Wildlife Garden, which contains bug hotels and flowers as well as a large pond with seating around it where dragonflies and damselflies frolic. Pond dipping sessions take place there throughout the year so that children and adults can explore the wildlife under the water as well as the insects above. 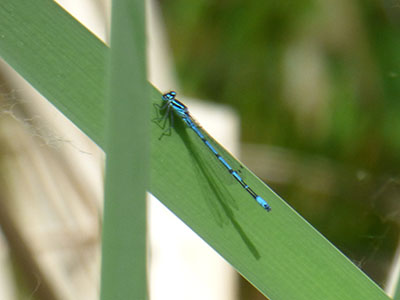 The Redshank Trail, marked in red, is an easy route of one mile along boardwalk and compacted gravel paths. You first follow the Blue Tit Trail, but instead of heading left towards the Wildlife Garden and Visitor Centre, turn right and then right again. The Tal-y-fan Hide provides views over the grassland between the two lagoons as well as views of the lagoons themselves. Depending on the time of year when you visit, you may see meadow pipits, great crested grebes and little egrets among many other birds. A bridge takes you over the Bridge Pond2 and you may be lucky enough to see kingfishers zooming past. The Carneddau Hide at the far edge of the trail is small compared to the other hides on this route, so can be crowded, but provides a panoramic view of the large lagoon.

The Grey Heron Trail, marked in grey on the map, is two miles long and encircles the whole reserve. The path can be challenging in places, with steeper gradients, mud and uneven terrain. However, it is worth doing if you can, as it takes you through the most varied habitats. There is a large reed bed where water rails may be hiding. The Vardre Viewpoint looks out over the large lagoon and the grassland where Carneddau mountain ponies graze and lapwings may be nesting. The Ynys Screen gives views of the south side of the large lagoon, and the path takes you past the saltmarsh on the riverbank where wading birds such as avocets (the bird that features in the RSPB's logo) may be seen, especially at high tide. The Foel Fras Screen looks over the large lagoon towards the Carneddau Hide, and the Benarth Hide looks out towards the Tal-y-fan Hide so again gives good views of meadow and water birds. The trail then circles the small lagoon before following the edge of the car park back to the Visitor Centre.

The variety of habitats within the reserve mean it is well worth visiting at varying times of the year to see different birds and other creatures that are around. The winter months are good times to see kingfishers and gulls. In spring you'll see shelducks, and hear geese fighting for breeding territory. In early summer you might hear the little egrets' gurgling call in the trees as well as the reed warblers' warbling in the reeds. There may be some moorhen chicks and ducklings about. Wild orchids (such as the rare red-flowered Early Marsh Orchid coccinea) are in full bloom. Late summer sees godwits and lapwings exploring the wetland area, and curlews may even make an appearance. Autumn is a good time to see dragonflies and damselflies basking on sunny days. The hides and viewing equipment on offer also mean wildlife spotters and photographers enjoy great views and are often rewarded with good pictures as souvenirs of their visits.