Waterworld, Stoke-on-Trent, Staffordshire, UK Content from the guide to life, the universe and everything 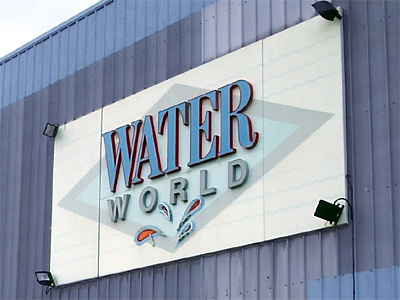 There's something about the exhilarating plunge into cold water on a hot day that is truly unforgettable and enjoyable. You are in a privileged position to enjoy this if you live in Stoke-on-Trent in Staffordshire, as here you can enjoy a trip to Waterworld. This is the oldest, and previously Britain's biggest, indoor waterpark. It was built at Festival Park, the site of the Stoke-on-Trent National Garden Festival1.

Waterworld is many people's favourite waterpark, as the slides are genuinely terrifying and exhilarating. It is a great place to spend a day. Food is available to purchase if you intend to spend the day here, though as Waterworld is a waterpark rather than a restaurant, the food is fine if you are after a quick snack to keep you going, but perhaps not up to the standard of other dining venues nearby.

Waterworld is certainly popular among h2g2 Researchers, who commented about their experiences there, providing a more personal perspective.

This is a 375-feet long water roller coaster, which means that the water blasts you back up as well as letting you slide down. You sit on a large inflatable tyre and are pushed uphill by water-jets before rushing down the slopes. This feels a little like an old fashioned wooden rollercoaster of the type still preserved at Blackpool Pleasure Beach but sadly banished from most theme parks. Unusually, unlike the pool's tunnel slides, for much of the slide the rider is beneath a net.

My wife (then girlfriend) went to Staffordshire Uni at Stoke (1998-2001). I must say that the waterpark there is brilliant - especially the water roller coaster. I've only ever been to one other waterslide like it. Anyone near Stoke should definitely visit.

This is a very, very, steep long slide; to get to it you must climb to the level of the other slides then ascend a narrow ladder. It feels like plummeting down a sheer drop. In pitch black.

This is the most talked about slide in the park, with one Researcher commenting:

Another Researcher agreed, having more experience than they would have wanted in that regard:

Waterworld is the only waterpark I have ever been to, living near to North Staffordshire for a few years when the children were teenagers, I had no idea it was better than others. Although my daughter did need first aid after using the Space Bowl, as she got hit in the jaw by a someone else just when falling into the water at the bottom.

And falling into the water too, can be disconcerting.

The first time I went down the Space Bowl I didn't realise it wasn't a normal slide as I didn't have my glasses on - I went down the hole in the middle headfirst! I was a bit stunned quite deep underwater, and it took a fair few seconds for me to work out which way was up while I could feel my breath running out, which was a little scary. Now I try to make sure I go feet first.

It also appears that the Space Bowl slide is enjoyable even if you do not actually go down it.

I never 'did' the bowl thing, watching it was extremely entertaining as the sliders, old and young alike, either just enjoyed a few gentle turns and disappeared into the vat of water below, or flew around the sides like some kind of daredevil motor biker riding the wall of death, getting faster and faster and, as gravity eventually took hold, finally being deposited back into some kind of reality.

Three exhilarating slides side-by-side, these are all equally good. They are:

The chutes tend to blur a little in my mind. On a quiet day we race up the spiral stairs to zoom back down. On a busy day the teaming people circling up the spiral staircase remind me of the circles of Hell and I briefly remember that truly we are damned before the rush of the slide empties my mind.

Four different coloured, fairly fast open slides, placed next to each other - great for family races.

There are three standard toddler slides for children under 110cm in height in the toddler area, while the main children's area has two tunnel flumes, red and green. There is also the 'Jungle House' play structure with slides, scramble nets, rope bridge, five water cannons and two nursery flumes. A boat slide also suitable for toddlers can be accessed from the pirate ship. The indoor assault course complete with lily pads to walk on stretches across the pool. Although teenagers will consider this area a little tame when compared to the rest of the pool, it has some good climbing and the small slides are perfect for younger children.

There is also a wave pool, indoor bubble pool and some rapids, complete with a dark cave section. The seasonal outdoor pool is heated to a tropical temperature and has palm trees to complete the atmosphere. The outdoor area includes an outdoor jacuzzi. The Lazy River winds both indoors and outdoors – ride on a tube on a circular route. This is seasonal but is tropically heated to remain over 30° Centigrade.

The pool is open all year round and boasts a licenced café bar and a café adjacent to the pool for people who are hungry but don't wish to change out of their swimwear. There is also a shop for those who don't know where their towel is and can buy a new one, along with other swimming accessories and costumes. There is also a dry soft play area on site and the waterpark can cater for parties. At time of writing (2016) Waterworld has submitted an expansion plan to construct a trampoline centre, fitness and spa club with its own pool and spa facilities, including an indoor running track, as well as to create even more water rides.

Many Researchers have been to Waterworld and commented on how much they enjoyed the waterpark.

I feel slightly shamefaced admitting that my hobby is visiting water parks. In other ways I'm quite sophisticated, enjoying art galleries, books and science. I went to university in Stoke-on-Trent and discovered to my delight that it was home to [what was then] Britain's biggest indoor water park. Now that I am a grown-up and have a son we sometimes take a 'waterpark day' - we select a day when his school is closed and head to Stoke-on-Trent. I found myself waiting with anticipation for him to be old enough to enjoy the experience. Waterworld is my favourite park as the slides are genuinely terrifying.

I haven't been to Waterworld in absolutely ages! It takes me back - lots of screaming kids howling with laughter and enjoyment.

Please note that many of the slides operate on a 'Red'/'Green' traffic light system, which is unhelpful if you are red/green colour blind (Daltonism).

Festival Park is located just off National Cycle Route 52 and Regional Cycle Route 555. Both of these pass Stoke-on-Trent train station, which is within walking distance. It is also near the A500 road and has a large carpark.

Waterworld is not the only waterpark available near Stoke-on-Trent, with another located nearby at Alton Towers. This is more expensive and slightly harder to get to but it is newer and the food and service are noticeably better. The waterpark was built as part of plans to make the Alton Towers  theme park into a resort, complete with the waterpark's Splash Landings hotel.

1Held in 1986, this was the second of Britain's national garden festivals following Liverpool.2Reading to Holyhead via Oxford, Stratford-upon-Avon, Bromsgrove, Birmingham, Stoke-on-Trent, Chester, Colwyn Bay and Bangor.