Last Chance To See - the Radio Series and Book Content from the guide to life, the universe and everything 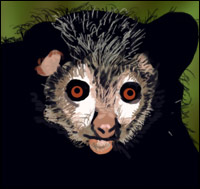 Humorous science fiction writers and zoologists don't come together very often, but when they do something wonderful can happen. People who may not be interested in zoology may end up with a lasting involvement, it can change the way they think, bring awareness and help with the protection and continuation of rare animals, and help the environment on the whole. This is what happened with Last Chance To See.

In 1985, Douglas Adams was in Madagascar looking for a possibly extinct lemur called the Aye-aye. The World Wildlife Fund and The Observer were sending famous authors to remote places to look for endangered species in order to write articles for the Observer Colour Magazine to help raise awareness of ecological issues.

Arriving in Madagascar Douglas was met by zoologist Mark Carwardine (who was working for the World Wildlife Fund at the time), they got on well together and actually found, or rather (briefly) saw, the Aye-aye alive and well.

It would seem that this event in Douglas Adams' life would have a lasting effect upon him. Indeed, in conversation the next day, Mark told him about a whole host of other endangered and possibly extinct animals. The result of this was what would become the Last Chance To See radio series, book and CD-ROM.

Originally envisaged for Television, the costs involved made that idea unviable, so they came round to the idea of a radio series. First came a ten-minute radio program called Natural Selection: In Search Of The Aye-aye, detailing their first meeting, which was broadcast on 1 November, 1985.

After working with Geoffrey Perkins on the Hitchhikers Guide To The Galaxy radio series, Douglas asked him to produce Last Chance To See, but after finding out that, rather than accompanying Douglas and Mark on their travels, he'd be staying at home to assemble the raw material, he politely declined.

Douglas and Mark decided on spending three weeks to search for each of the rare animals they'd selected as the most endangered; to find them all would have taken about 300 years, 1,000 more if they included rare species of plants. So they came up with a list and identified about eight of them as suitable subjects. It was generally a case of 'I'd like to go here...', 'Well I'd like to go here...', 'OK, so lets go here...'.

Mark Carwardine and Douglas Adams were both finally available to start their travels by 1988. Mark Carwardine had done most of the organising, since it was his field of expertise. So from mid '88 to mid '89 Mark and Douglas and radio producer Gaynor Shuttle spent 12 months travelling the world.

The radio series was narrated by Peter Jones, again someone who Douglas had worked with on Hitchhikers, and it was broadcast on BBC Radio 4, between October and November 1989. Six 30-minute episodes made up the series, each episode dealing with a different animal. Four of the episodes were repeated the following year. Another five-part Last Chance To See series was broadcast in May 1997, this series though, was just Douglas reading from the book that he'd written with Mark about their adventures.

The budget for the radio series wasn't large. In fact both Mark and Douglas were only paid presenter fees for the series; their travel and expenses and those for the producer and sound recordist were paid by Mark and Douglas themselves out of their advance for the book. With little time or budget for editing and production, the finished production was a little rough and it was rushed out with little promotion, which, understandably, left them a little aggrieved. But its point had been made - these animals were in danger of extinction, and mankind was largely responsible.

The fragrant parrot of Codfish Island in New Zealand is large, green and has forgotten how to fly. Which is worrying because there are less than fifty of them left.

According to Chinese legend she's the reincarnation of a drowned princess. She is 20 stone, not very bright, short-sighted and in increasingly short supply.

Easily mistaken for a mudbank, the Jesuits thought it was a fish and ate it on Fridays, but in fact it's a totally harmless mammal.

Spends most of its time hanging around in trees in the middle of a cyclone belt. At regular intervals it is blown into oblivion somewhere over the Indian Ocean.

Grows up to 12 feet in length, eats goats and people, and has the worst-smelling breath of any creature known to man.

Juan Fernandez Island, off the coast of Chile, was the inspiration for 'Robinson Crusoe'. When the book was written in 1719 there were so many Southern Fur Seals it was impossible to walk on the beaches. Today it's very different

Information about the series is sadly in short supply, most likely due to not having been aired in the UK in its entirety for some time. The Rodrigues Fruit Bat episode was, however, broadcast on BBC7 as part of tribute to Douglas Adams in 2003.

The radio series was broadcast in Australia in 2001, on ABC Radio National, where the episodes were given rather more intriguing titles:

The Book and CD-ROM

The Last Chance To See Book was released in 1990, not long after the radio series. Despite Mark and Douglas retiring to the south of France with the recording and photographs to write it, after four months they had only got a page written (which never even made it into the final book). In the end the publisher said as soon as you've got enough for a book, we'll publish it. This meant that two of the animals they went to see were omitted from the book, these being The Amazonian Manatee and The Juan Fernandez Fur Seal.

Of the three mediums that Last Chance To See exists in, the book is the most well known. It is perhaps worth finding a copy of the hardback version as it seems the text is slightly different in parts.

As previously mentioned a second radio series of five episodes was aired in 1997, which was just Douglas reading parts of the book; an abridged reading of the book by Douglas Adams was also released commercially. And parts of the book can be read on the official Last Chance To See website. Although it didn't sell quite as many copies as other Douglas Adams books, Last Chance To See was the book he was most proud of, and it remains the favourite of most fans.

The Last Chance To See CD-ROM was released in 1995, it contained a whole host of photographs, the entire text from the book, a complete reading of the book by Douglas Adams, extracts from the radio series and additional audio material.

The Animals - Then And Now

The animals that featured in the radio, book and CD-ROM of Last Chance To See were endangered or were thought possibly to no longer exist in the years (1985 - 1990), concerns that inspired Douglas and Mark to see, write and make radio programs about them in the first place. It would be nice to think that in 2005, their fortunes may have changed for the better...

In 1985 few Aye-ayes were known to exist, those that did had been moved to the small island called Nosy Mangabé, some 20 years previously. Their lowest population was thought to be between 12 and 20 in 1965. Currently they are still listed as endangered, though in 1994 it was estimated that their population could be between 1000 and 10,000.

In 1974 no Kakapos were thought to exist, by 1995 there were at least 50. Their current total of 86 (as of March 2005) is thanks to the efforts of the New Zealand Wildlife Service, set up in the 1950s, and the Kakapo recovery program. Despite encouraging news in recent years, the Kakapo still needs a lot of help to guarantee survival.

Also known as the Baiji dolphin, it lived, not surprisingly, in the Yangtze river, one of the oldest and busiest rivers in the world. In 1975 the dolphin was declared a national treasure in China, and they set up a protection program but it had little success. From about 6,000 pre 1950s, the number fell to less than a hundred in 1995. Despite the efforts of many, the dolphin was declared extinct in late 2006.

The main reason for the decline in numbers of the Amazonian manatee is hunting by humans and animals alike. The situation has been worsened by human actions such as water control and drowning the animals in fishing nets. The Manatee was considered endangered in the 1970s and in 1973 human hunting of the animal was banned. At one time there were great herds, now there are only small groups of four to eight. They are classed as vulnerable, which means a high risk of extinction in the medium-term future.

Like many animals, threats to its habitat are a major problem: deforestation and cyclones have contributed to a decrease in their numbers. In 1974, 75-80 were left in the wild and by 1990 up to 1,000 existed, but a cyclone in '92 dropped their number down to 350. The Mauritian Wildlife Foundation cite a study conducted in 2000 that showed a population between 1,500 and 2,000.

Known by locals as 'Ora' and by others as the Komodo Island monitor, there are about 1,000 - 5,000, and it would seem that this has always been their number. Human intervention and threats to its restricted habitat are the problems that continue to endanger its survival.

Discovered in 1902, the Mountain Gorilla is one of our closest relatives. War and poaching are the biggest threats, also their small numbers and diminishing habitat due to humans' need for farm land are contributing factors. Dian Fossy (whose life story was turned into the film Gorillas In The Mist), studied the animals from 1967, until her (unsolved) death in 1985. She set up the Digit Fund, later renamed The Dian Fossey Gorilla Fund International , to help protect the gorillas. There are around 400 left in the wild at present.

2,000 - 3,000 Northern White Rhinos roamed over five north African states in the 1900s. With two horns, it was even more attractive to poachers, who began hunting it in 1903 when it was discovered. The poachers left 1,000 alive by 1980, and by 1984 they had killed all but 13. The Garamba Project began that year, and by 2003 they had doubled in number to 32. Sadly poaching has become more of a problem, in the period 2003-4, poachers had again succeeded in halving their number. There are between 17 - 22 left today. Save the Rhino continues the fight to prevent extinction.