Pop Songs That Name Drop Content from the guide to life, the universe and everything 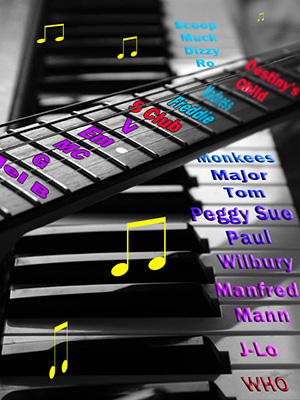 In many cultures it is considered to be bizarre behaviour to talk about yourself in the third person. It is also frequently viewed as rude, arrogant and egotistical for someone to talk about themselves. For a singer to sing about themselves for no apparent reason seems suspicious to say the least. Is this a sign of narcissism or a belief that their intended audience will forget the name of the act they are listening to unless they do so?

This trend seemed particularly popular in the late 1990s and early 2000s. Destiny's Child, for example, seemed to do it a lot, inexplicably whispering their name partway through a song. Their song 'Independent Women' (2001) is not only riddled with grammatical errors but also contains the words 'Destiny's Child, whasup?'. It's a tough call to narrow it to just one example, but a typical sentence in the song is:

All the women who are independent throw your hands up at me.

Why is the song dictating that independent women should lose their independence, conform and undertake the same actions? Some truly independent women would, but for their own, unique and independent reasons, while it is desirable for the others to react in various different ways. And do they want the women to chop their hands off in order to throw them, and if they've chopped their hands off, how will they throw them? The group have clearly not thought this through...

Some songs introduce the members of the band. It can be a way for the members to influence how they are perceived by their intended audience. An example of this is the Manfred Mann song 'One in the Middle' (1965), which introduces everyone with words such as:

Mike Hugg plays the drums, yeah, Tom McGuiness lays it down on the bass
But the one in the middle sings 'hey, diddle, diddle', and he's just a pretty face.

Using a song to introduce yourself doesn't always work, however. The Spice Girls debut single, 'Wannabe' (1996), was a Number One hit in 22 countries, making it the best-selling single by a Girl Group not only in the UK but also in the world. The song introduces who the Spice Girls are, and gives a little bit about the personalities and preferences of Em (Emma Bunton), G (Geri Halliwell), MC (Mel C), V (Victoria Beckham née Adams) and Mel B, specifically telling the audience 'You gotta listen carefully':

We got Em in the place who likes it in your face, we got G like MC who likes it on an. Easy V doesn't come for free she's a real lady and as for me ah you'll see.

Following the overwhelming success of the song, it might be expected that the Spice Girls' own attempt at self-identification would have worked; however, the media ignored it completely. Instead the press chose to nickname the girls Baby Spice, Ginger Spice, Sporty Spice, Posh Spice and Scary Spice and not In Your Face Spice, G Spice, On An Spice, Easy Spice and Ah You'll See Spice as their song would indicate they would have preferred1 to be known.

Sometimes musicals acts invent a dance move and name it after themselves. This is a worrying trend and an activity that really should be left to the professionals, namely superheroes. After all, who can forget the Batusi, the dance invented by Batman?

Another example is 'The Freddie', named after Freddie and the Dreamers' lead singer Freddie Garrity. The song 'Do The Freddie' (1965) tells us:

Kick your feet up swing your arms up too, move your head both ways like you see me do
Then jump three feet to the swinging beat, do the Freddie, do the Freddie

This phenomenon was rightfully mocked by the Traveling Wilburys in their song 'Wilbury Twist' (1990). The lyrics are a delight from start to finish.

Turn your lights down low, put your blindfold on
You'll never know where your friends have gone
Could be years before you're missed, everybody's trying to do The Wilbury Twist

There are exceptions to every rule and there occasions when it is acceptable to name drop in a song. Particularly when you are mocking yourself. Manfred Mann jokingly claimed that they had inadvertently led to such disasters as the Charge of the Light Brigade and caused the fall of Troy in their song '5-4-3-2-1' (1964). When John Lennon heard that people were analysing his song lyrics for mystical messages, he wrote the song 'Glass Onion' (1968) to deliberately confuse them, adding the line 'The Walrus was Paul', referring to Paul McCartney. Lennon and McCartney would later engage in a fierce lyric war as the Beatles broke up, while some listeners concluded that Paul was dead. During this period John would reference himself in the self-examining song 'God' (1970) with the words:

Another legitimate category of name-dropping is when instead of the band name being mentioned, the song refers to characters or people from previous songs. Probably the most famous Buddy Holly song is 'Peggy Sue' (1957), based on a real person; he later informed us 'Peggy Sue Got Married' (1959). Similarly, David Bowie mentions fictional Major Tom in 'A Space Oddity' (1969), and again in 'Ashes to Ashes' (1980) in which he is described as a 'junkie'.

This is not a new phenomenon. Gilbert & Sullivan's operetta The Pirates of Penzance (1879) jokingly references their earlier success HMS Pinafore (1878), with the Major-General Stanley boasting:

I can hum a fugue of which I've heard the music's din afore,
And whistle all the airs from that infernal nonsense 'Pinafore'.

Is it acceptable for songs that were written for television to name drop? The Monkees, for example, were created as a television show about a band in the same vein as Beatles films A Hard Day's Night (1964) and Help! (1965). The Monkees2 played the role of a group of musicians so well that they enjoyed a brief, but highly successful, musical career. Their theme3 (1966) perfectly encapsulated what the show was about:

Hey hey we're the Monkees and people say we monkey around
But we're too busy singing to put anybody down.

Yet there are cases in which television theme tunes that introduce the main characters really, really should not have made it onto the airwaves, yet have inexplicably done so with ridiculous success. Here are some examples:

Is 'Fun' Part of 'Fundraising'?

The 1980s was the decade of the fundraising song. If there was a cause to protest against or raise funds for, the '80s were there with a song for every occasion. For example, Band Aid's 'Do They Know it's Christmas?' made Number One twice in that decade, raising money in 1984 and 1989 for the Ethiopian Famine. Not to be outdone, across the ocean US singers calling themselves United Support of Artists (USA) for Africa released 'We Are the World' in 1985. 1988's Sport Aid were 'Running All Over the World'. Ferry Aid recorded 'Let It Be' in 1987 to raise funds following the Zeebrugge Disaster in which the ferry MS Herald of Free Enterprise capsized, killing 193 passengers and crew, which should not be confused with the charity version of 'Ferry 'Cross the Mersey' that was released following the Hillsborough Disaster in which 96 football fans died in 1989.

Within this environment, when it was announced that Doctor Who would go on an 18-month hiatus in 1985, the natural and/or drunken reaction from Doctor Who producer John Nathan-Turner was to form a supergroup and release a charity single. The group, named Who Cares?, included Oscar-winning composer Hans Zimmer on synthesiser, along with lyrics sung by Doctor Who stars Colin Baker, Nicola Bryant, Nicholas Courtney and Anthony Ainley. The song 'Doctor in Distress' included the lyrics:

It failed to chart.

Singers tend not to sing about themselves doing the ironing or trimming their toenails, but instead like to present themselves as engaged in highly pleasurable activities. Chief among these is presenting the singers as very sociable, extrovert party-goers who know how to have a good time. A typical example is S Club 7's 'S Club Party' (1999), which contains the line:

'S Club (there ain't no party like an S Club party) gonna show you how.'

The trouble with these songs is that the listeners get too caught up in the excitement of the party atmosphere to question what sort of party it is. Just what are S Club gonna show you how, eh? Similarly, what are Take That asking their party guests to take when they attend their party in song 'Take That and Party' (1992)? Are pop songs encouraging their listeners to succumb to peer pressure?

A Drop by Any Other Name

Sometimes it is difficult to tell whether an act is name dropping or not in their song. It largely depends on the band's name. Group The The, for example, would legitimately find it very difficult not include the word 'The' in any of their songs. This was not a problem faced by band Dave Dee Dozy Beaky Mick & Tich. Similarly Queen include the word 'Queen' in their song 'Killer Queen' (1974), but the lyrics are in the third person and describe a woman: 'She's a killer queen'. There is a brief 'Ready Freddie' in 'Crazy Little Thing Called Love' (1980), referring to lead singer Freddie Mercury, but you can't hold that against them.

Are these songs name dropping or not?

Singers singing about themselves is a phenomenon that is mostly harmless. The only lasting consequence is that songs that predominantly refer to the singer are unlikely to attract numerous cover versions. This Entry's aim has been simply to encourage people to pay close attention to the lyrics of the songs that they listen to, and think about both what the lyrics actually mean and also what they could be interpreted to mean. If you have in the past derived pleasure and joy from the songs and singers affectionately teased above, then we hope that you will continue to do so for many years to come.

Unless, of course, the song that you enjoy listening to is 'Mr Blobby'. There are limits.

1We are specifically told that Em likes 'it in your face' while MC likes 'it on an'.2Strange but true – an infinite number of The Monkees singing notes and words at random will, eventually, perform every operetta by Gilbert and Sullivan.3Which they also performed in Spanish as 'Tema Dei Monkees'.4The man behind the 'Mr Blobby' and Teletubbies songs, Simon Cowell, would later create such television series as Britain's Got Talent and America's Got Talent.5Producer Sylvester Stallone had hoped to get the rights to use Queen's 'Another One Bites the Dust' in Rocky III (1982) but had been unable to. He had hoped his brother Frank Stallone could write something similar but in the end he approached Survivor to write a song similar in feel to Queen's. 'Eye of the Tiger' was the result.