It's My Party - Constructing the Perfect Playlist Content from the guide to life, the universe and everything 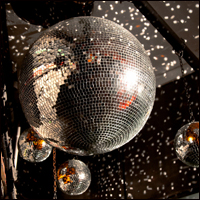 You are sitting at your table absent-mindedly playing with your drink and debating whether to get up and dance. The familiar strains of 'Let's Twist Again' hit the air and you hit the dance floor for a 'couple of dances'. Nearly two hours later you return to your table to find that the bar staff have collected up your unwanted beverage. You marvel at the skill of the DJ and hit the cold night air still singing 'New York, New York'. If you've ever wondered how the alchemist of the turntable turned a leaden night into pure gold, here is the answer.

Anyone who has ever tried to DJ a wedding or a 21st birthday will know the problem. How do you keep a crowd, ranging in age from 12 to 82, happy? You have to steer a middle course between boring the youngsters and outraging the elders. It is a tremendously difficult balance to draw, but you're being paid for the evening so you're expected to draw it!

Thank You for the Music!

There are a number of songs, up to a hundred maybe, that have lodged themselves in the collective memory banks of any partygoer. You hear them at any gathering of the extended family. In the real world you affect to mock and disparage these records, but the party is not the real world. It is a world cunningly created by the DJ in which taste, dignity and reserve go out of the window.

A good DJ will play all the current hits during the buffet where they can be safely ignored by nearly everyone. He will earn his money between 9.30 and 11.20 when his job is to get as many people as possible onto the dancefloor. The decision is not which songs to play, but the exact order in which to play them. That is the skill of the really good DJ and the aspect of the job that is the hardest to master.

The battle for the hearts and minds of the partygoers is won in the first four songs. If you lose them here you've lost them for the rest of the night, apart from occasional forays onto the dancefloor. The cast iron party starter is 'Let's Twist Again' followed by 'Rock Around the Clock'. The more mature dancers can show the youngsters how to do real dancing, and the youngsters can make up in speed what they lack in skill. Both groups enjoy quietly teasing each other, but they are also impressed with each other's prowess. A couple of Beatles tracks will complete the first job of floor filling.

Get Down and Get With It

Now our maestro gets to work on the waverers. A change of pace now will be fatal, so the secret is to slowly work your way through the decades. The '50s and '60s section will contain songs that the wallflowers will belt out as they get into the mood to make that final decision to get up. On the dancefloor the lyrics will be screamed out with eyes closed as the dancers start to forget that anyone else is there. The 1970s arrive, and the strains of 'Tiger Feet' herald the arrival of glam rock and its infectious good humour. Everyone knows how to do the 'roadies dance' even if they can't quite keep up with the tune! Follow this up with 'Dancing Queen' and the floor is packed for the rest of the night.

I'm in the Mood for Dancing

The 1980s arrive and the excitement reaches fever pitch. 'Tainted Love' is closely followed by 'Come on Eileen'. People scream at each other that the '80s have to be the best decade ever, as they conveniently forget Joe Dolce and Bros! This section is the heart of the evening as everyone shares in the perfectly-crafted floor fillers, but without the careful build up these 'sure-fire winners' would not be as effective. Like a song with a good hook, it is largely wasted if the verse goes nowhere.

Won't Somebody Dance with Me?

The mood is suddenly taken right down as the slow dances take over. It is the only time during the evening that an abrupt change of pace works, but even then it has to be trailed in advance. Two songs' warning is sufficient for prospective partners to eye each other up. It was memorably, and accurately, described as the 'erection section' by one DJ. For those who are lucky enough to have a partner it is a welcome respite from the up-tempo numbers. For those lucky enough to be YFS1 it is a chance to have a final drink as they get ready for the finale. Four or five songs is the optimum length for this part of the night.

The good DJ will never end with the slow dances. He will back himself to get everyone back for one final crazy dance. These are the silly dances, such as the incomparable 'YMCA,' that all ages can perform with a stunning lack of self-consciousness. Irony is the hallmark as the crowd grin and laugh with each other at the sheer silliness of it all. With the crowd calling out for more he will announce the final song of the night to good-natured groans. He has won the battle through good preparation and an uncanny sense of human nature.

A Night to Remember

Every DJ has a different list of songs, although some will turn up at every gathering. The list below is, however, representative of the type of songs that will be played by the expert DJ before he hands out his business cards to the satisfied 'customers'.

... the titles of the sections in this entry are songs that would also make stellar contributions to any DJ's set. They are: