'The Who - Live At The Isle of Wight Festival 1970' - The Album Content from the guide to life, the universe and everything 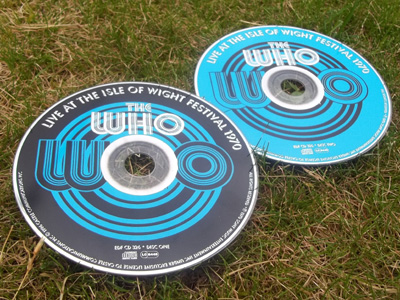 The Who, one of the greatest British bands of all time, are particularly famed as one of the best bands ever to have seen perform live1. 1969-71 is considered the period when they were at the peak of their career.

The Isle of Wight Festivals

The 1970 Isle of Wight Festival

The Who at the Isle of Wight Festival

Having been one of the highlights of the 1969 Festival, The Who were quickly signed up to return in 1970. Although Jimi Hendrix was the overall star, they were a second headline act. After all, they were the most popular band never to have had a UK Number One single. Advertised and billed as performing in the evening of Saturday 29 August, 1970, after The Doors, due to severe delays and overrun they did not actually appear on stage until after 2am on Sunday morning.

They played a similar set to their 1969 appearance. This not only included their own work – a mixture of their established hits and back catalogue and songs from their Tommy concept album – it also involved material showing their rock'n'roll roots. Other artists' songs like 'Summertime Blues', 'Shakin' All Over' and 'Young Man Blues' were performed live on stage.

Renowned for their theatrical performances, built on dramatic instrument destruction performed live on stage, at Woodstock they had benefited from a dramatic sunrise during their climax of Tommy. For the 1970 Festival11 The Who wanted to create something equally dramatic, but were unwilling to leave things to chance. They secretly smuggled some airport lights to the festival, which they planned to use to create a similar dramatic moment. At 4:15am these powerful floodlights were switched on to illuminate both the stage and the audience. Unexpectedly, this attracted a vast cloud of moths, which flitted like snowflakes over the audience's heads, creating an outstanding visual accompaniment and natural ovation to the music. For the 1970 Festival John Entwistle performed dressed as a luminous skeleton.

The Who played more songs than they had at Woodstock. The last song they performed was 'Magic Bus', one of their weaker songs and perhaps an odd choice for the grand finale. However, this had not been intended to be the last song. Ray Manzarek, organist with The Doors12 who had left the stage before The Who came on to perform, recalled,

The Who were just amazing. They seemed to be on for two hours or more, and they would have kept on playing but Pete Townshend's guitar13 broke. I remember he came off stage furious that he couldn't keep playing.

This was an ironic end to the largest performance for a band famous for deliberately breaking their instruments to create a dramatic spectacle.

Message To Love, The Isle Of Wight Festival Film

Knowing that the festival would be a historic occasion, it was planned to film and record it in its entirety, using high-spec film cameras and then state-of-the-art 8-track tape. Peter Harrigan, the Press Officer for Fiery Creations, the company that had organised the Isle of Wight Festival, announced,

It won't be another 'Woodstock', this will be something entirely new in cinema.

Sadly the financial fall out from the festival caused the liquidation of Fiery Creations, and the film and soundtrack of the festival, originally intended to be called The Last Great Event, was at first delayed and later trapped in the legal wrangling. Murray Lerner's feature length film summarising the festival, Message To Love: The Isle of Wight Festival 1970, finally emerged in 1995 – the festival's 25th Anniversary – along with an accompanying album. This contained two Who songs: 'Young Man Blues' and 'Naked Eye'.

The Who – Live At The Isle of Wight Festival 1970 Release

All songs were written by Pete Townshend except where stated.

Chris Charlesworth, the reporter for Melody Maker, said on the album's release,

This is The Who as they never were before or again, at the height of the triumph of Tommy before it became a millstone around the group's neck. This is The Who, a group that could have big hits and still be cool, sell millions and still be 'underground'.

Listening To You: The Who Live At The Isle of Wight Festival 1970 – The Film

The lengthy-titled Listening To You: The Who Live At The Isle of Wight Festival 1970 film of this performance was finally released in 1996 on VHS and later re-released on DVD. It is credited as being directed by Murray Lerner, who recorded the entire festival.

Curiously the song order has been re-arranged to have all non-Tommy material at the beginning. It does not contain all the songs performed and lasts only 85 minutes. The concert is rated 15.

The inside cover of the DVD contains the classic 1970 Isle of Wight Festival poster design by Dave Roe17 and contains a contemporary press cutting review of the festival from Melody Maker and NME.

Performances on the Listening To You: The Who Live At The Isle of Wight Festival 1970 film are:

When John Entwistle died in 2002, it was this film footage of him wearing the black jumpsuit with a luminous skeleton outline that was most used to accompany the television news reports of his death.

In 2004 The Who again headlined the Isle of Wight Festival, for the third and, to date, final time. Their set included nine songs that they had played at the 1970 Festival: 'I Can't Explain', 'Substitute', 'Naked Eye', 'My Generation', 'Pinball Wizard', 'Amazing Journey', 'Sparks', 'See Me, Feel Me' and 'Magic Bus'. Six of these had also been played at the 1969 Festival18.

Roger Daltrey, when interviewed and asked about his previous Isle of Wight Festival appearances, simply said,

It feels good to be back on the Island, it doesn't seem like anything has changed...
All I can remember about playing in '70 is getting drunk with Jim Morrison19, but [he] died and never bought his round.

1The Who played a pivotal part in the development of the live album. Their record Live At Leeds, released only weeks before their greatest performance at the 1970 Isle of Wight Festival, is accepted as being one of the greatest live albums of all time.2Although there were established jazz, blues and, in America, folk festivals. Some of these, such as the annual Windsor Jazz and Blues festival, did sometimes feature rock and pop artists, including The Who.3The one-off Festival of Flower Children held in Woburn Abbey.4This first festival was a fund-raising event intended to build a municipal swimming pool. All Isle of Wight festivals since have been business ventures.5They would again headline at the 2004 Festival, with Zack Starkey, son of Ringo Starr, on drums. Ringo Starr, along with John Lennon and George Harrison, had been in the audience and seen The Who perform at the 1969 Festival. Paul McCartney had not, expecting the birth of his first child at the time.6Bob Dylan's performance at the 1969 Festival can be heard on his Self Portrait album.7Afton Down has been owned by the National Trust since 1961. It is an Area of Outstanding Natural Beauty on the Tennyson Heritage Coast.8Despite newspaper-spread rumours to the contrary, the Isle of Wight Festival was not a communist plot to take over the world.9The Isle of Wight would wait until 2002 before it held another music festival, although one has been held annually since then.10Drummer Keith Moon later inspired the creation of the character of Animal, the drummer in the Dr Teeth and the Electric Mayhem band in The Muppets television and film series.11Their attempt to land dramatically on stage in a helicopter for the 1969 Festival almost resulted in a helicopter crash.12The Doors had been invited to perform at Woodstock but had declined. Later regretting that decision, they were very keen to play at the Isle of Wight instead.13A Gibson SG.14For From Mao to Mozart: Isaac Stern in China, which follows the master violinist on a cultural tour of China.15Other artists who had performed at the 1970 Festival have since had albums of their performances released. Other available performances include Leonard Cohen – Live at the Isle of Wight 1970, Miles Davis – Live at the Isle of Wight Festival and Emerson, Lake and Palmer – Live at the Isle of Wight Festival 1970, The Moody Blues – Threshold Of A Dream – Live at the Isle of Wight 1970, Taste Live At The Isle of Wight, Jethro Tull's Nothing Is Easy – Live at the Isle of Wight 1970. Jimi Hendrix, who died shortly after the 1970 Festival, has had his performance appear on a number of videos and albums but the definitive version is Blue Wild Angel – Live at the Isle of Wight Festival. 16The Beatles version was even released as a single in America, where it was a Number 1 hit in both the Cashbox and Record World Charts, but Number 2 in the recognised Billboard chart. The song was never released as a single in the UK, where the Beatles refused to release their cover versions of other artists' songs as singles.17Dave Roe has designed the artwork for every Isle of Wight Festival to date, linking the original three Festivals to the Festivals of the 21st Century.18'I Can't Explain', 'Pinball Wizard', 'Amazing Journey', 'Sparks', 'See Me, Feel Me' and 'My Generation'.19Lead singer and songwriter with The Doors.