Noel's House Party Content from the guide to life, the universe and everything 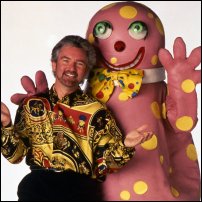 Ask a group of people for the worst television institution of the 1990s, and you'll get a variety of answers. Some will suggest children's programmes such as Chuckle Vision or Tots TV, while others will bemoan such entertaining nonsense as Through the Keyhole or Blind Date. However, there was one show that trounced all others, filling the UK's Saturday nights with inanity, tasteless jokes and plenty of 'gunge'. This was a show that took the definition of 'light entertainment' to its very limits, and yet was watched by over 15 million people when at its peak. Among its crimes was the creation of Mr Blobby, one of the most annoying characters in television's short history. For those living in these enlightened times, the very existence of Noel's House Party may seem utterly wrong, and so this entry aims to explain what, if any, appeal the show might have had.

House Party's problems can be traced back along the television career of its host, Noel Edmonds. His first big appearance as host of a Saturday evening show came in 1982 with The Late, Late Breakfast Show. The show consisted solely of various forms of light entertainment – phone-in quizzes, television out-takes, hidden camera pranks – and, as a result, suffered from poor ratings. The BBC were quick to attempt to fix things, inviting big names such as ABBA to appear and bringing in members of the public to perform outlandish stunts. These quick fixes saved the show, which continued for another four years; however, the poor production values underlying the show become painfully clear when a member of the public died during the rehearsal of a bungee jumping stunt in November 1986. Edmonds resigned immediately, stating that he would not continue his career at the BBC unless he could be confident about the production team with whom he would work.

Edmond's next Saturday evening production, Noel's Saturday Roadshow, ran from 1988 to 1990 and was another piece of light entertainment produced on a shoestring budget. Though set in a studio, the 'roadshow' was ostensibly filmed from a different exotic location each week with the help of some unimpressive props and scenery. The series effectively acted as the evolutionary precursor to House Party, with the hidden camera feature of The Late, Late Breakfast Show becoming the infamous 'Gotcha' segment (see below). The roadshow also introduced the gunge tank, a device that poured heavily-thickened, brightly-coloured water over the heads of unfortunate guests. The show was pretty cheap, but the combination of various gimmicks and celebrities with Edmond's unique presenting style made it a success.

It is therefore quite easy to explain why Noel's House Party was so full of gimmicks when the first series began in 1991. The concept was simple: provided there are enough bangs, it doesn't matter how many bucks you actually spend. The 'Grand House' in which the show was set was reasonably impressive, but the need for jokes about its location in 'Crinkley Bottom' pointed to a certain lack of quality content. To be fair, House Party managed to provide quite a variety of bizarre features without seeming all that odd, and the show's quirky nature appealed to as many as 15 million viewers during its early years. Examples of gimmicks were:

One particular memory many have of House Party was the birth of Mr Blobby, a large, and equally annoying, pink character with yellow spots and a vocabulary of one word. Designed to be a parody of various children's characters, Mr Blobby featured as a disruptive co-host in the fake television shows used to embarrass early Gotcha recipients. The rehearsals of the shows would place the victim alongside a well-behaved actor wearing only part of the Mr Blobby outfit, leading to a great deal of surprise when the 'live' version of the show was wrecked by the googly-eyed miscreant. Edmonds would then emerge from the suit and deliver the Gotcha. The pattern was repeated until Mr Blobby was so well known that celebrities began to cotton on to the prank.

Mr Blobby eventually became a character in his own right and was soon doing the rounds on various BBC shows, each time causing havoc and generally wrecking the place. This fame led to the tasteless 'Blobby mania' in 1993, when Blobby dolls, lunch boxes, mugs, key rings and fridge magnets flooded the nation, and the single 'Mr Blobby' displaced Take That in the charts to become the Christmas number one. Licensed Blobbies started to appear at birthday parties, leading to a raft of incidents involving clumsy behaviour and angry parents. However, House Party can hardly be blamed for this sickening fad – it was in fact a marketing firm from the Black Country that first seized upon the bizarre character as a source of income, turning the loveable pink creature into a money-spinning monster.

Besides, even with his violence, lack of coherent speech and repetitive nature, Mr Blobby still had some meaning. As Elizabeth Kolbert of the New York Times explained, Blobby was a lot closer to reality than the equally disturbing Barney the Dinosaur:

His frozen smile has a malevolent curve. Blobby is Barney without his medication.

Considering House Party's popularity during the early '90s, it would seem difficult to justify its description as 'utterly wrong'; however, that is exactly what the show had become when it was taken off the air in 1999. Having once been described as 'the most important show on the BBC', House Party began to lose popularity as the same gimmicks were recycled and the set was changed in an attempt to maintain interest. With the show's budget being cut by 10% each year, the amount of gunge used on the show was increased in a vain attempt to compensate for a lack of originality. New features such as Sofa Soccer1, I'm Coming Out2 and Three To Go3 failed to live up to the standard of the earlier, more novel segments. House Party was effectively doomed after Edmonds pulled one of the episodes in January 1998, blaming a lack of funding for problems with the show.

When the show finally ended with Edmonds and Blobby heading off towards 'Dangly End', its ratings had halved. Despite his anger at the BBC, Edmonds later admitted to having made bad television during the show's later years. However, it's fair to say that the 'reality television' that replaced Edmonds' brand of light entertainment is hardly an improvement. Noel's House Party may have been doomed to eventually fail as ideas about what makes good television changed, but that's not to say that the shows that replaced it have provided any improvement over the much-lamented Saturday night gunge-fest.

1A viewer directed a ball cannon in an attempt to score against a well-known goalkeeper.2A member of the public with a mildly-embarrassing secret would appear and tell it to their family.3A game of 'Call My Bluff' using fake regional news stories.