'Call My Bluff' - the TV Series Content from the guide to life, the universe and everything 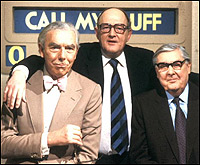 Television game shows were much gentler in the past. Call My Bluff truly fulfilled the BBC's Reithian1 values by being entertaining, educational and informative.

It began in 1965 with Robin Ray as the chairman and panelists that included Frank Muir, Arthur Marshall, Robert Morley and whichever celebrities of the day fancied themselves as members of the intelligentsia. The show continued with Joe Melia, Peter Wheeler and finally Robert Robinson in the chair until 1988, when it was felt that the programme had run its course. However, thanks to daytime television, Call My Bluff was recommissioned in 1997, with former Blockbusters host Bob Holness as chairman and team captains Alan Coren and Sandi Toksvig.

The format for the show hasn't changed much in 40 years. Chairman Bob will set a word like 'viburnum', or 'pirlique', and each member of one team will define the word. Two of the definitions however, are bluffs. Based on the descriptions, one member of the opposing team must then choose the definition that they think is most likely to be correct. If they are right, then they score a point; if not, then the opposing team gets the point.

The main appeal for the show however comes from the way the teams present their definitions. They tell rambling little two-minute long stories about how they were doing something or other when they suddenly had cause to use a fratmeritskal, or when they had occasion to go to a reskitportel, or even wear a footling turtlingdrome. The idea is to be funny, and to also make the opponent a little more skeptical about each of the descriptions. Not only can you be heartily entertained by the panelists's verbal flights of fancy, but you can seriously expand your own vocabulary.

It's also an easy game to play among friends, especially if each team is given a little time to work out their patter for each word. All you need is a pack of index cards, like you'd use in a desk directory or filing system, some pencils and of course a good dictionary.