Arts of Greek Antiquity - Better than Nature Content from the guide to life, the universe and everything 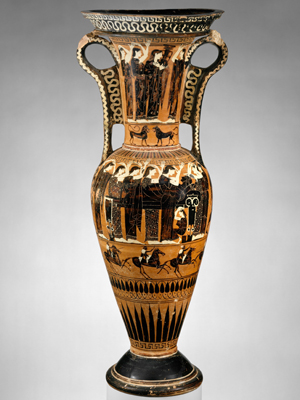 The culture that today is known as 'Greek Antiquity' lasted from about 1000 BC to 1BC (AUC1 753). In fact there was no common state of 'Greece' at that time, but a cluster of small separate states. Despite this, a common style in arts still developed in the eastern Mediterranean area.

The art of Greek antiquity can be seen today as sculptures, on pottery and also in Roman replicas as well as written evidence from writers of that time. Most statues served not purely as decorations but were given to temples as offerings or were put on tombs. The most important topic in the arts was always the representation of the beauty of the ideal male body.

Contrary to popular belief today (mostly influenced by historians of the 19th Century) Greeks lived in a very colourful world. Temples and public buildings were often painted in vivid colours, there were large murals and even everyday objects were decorated.

At the end of the Bronze Age (the Helladic period) the first advanced civilisation in Europe emerged in Greece. This so-called Mycenaean period is named after the archaeological site Mycenae in the north-eastern Peloponnese and lasted from about 1700 to 1100 BC. The Mycenaeans created the first written records of Greek language. The reasons for the downfall of this culture are still not completely known, but its end resulted in the Greek Dark Ages. The population rapidly decreased and innovations like script were lost. Findings from this period mostly consist of vases decorated with naturalistic patterns.

From about 1000 BC a new culture emerged from the ruins of Mycenaean Greece.

In the 8th Century BC Homer, the first great European poet, composed his Iliad and the story of the Odyssey. It is also the beginning of the historic period of classical antiquity. The first Olympic Games were held in 776 BC and were a recurring event until 393 AD. There was not yet any monumental architecture, sculptures or paintings. Most findings from this time are ceramics used for offerings and in funerary rites and small metal figurines. The ceramics were decorated mostly with simple geometric patterns which got more and more complex over the time. Later also abstract figures were painted on pottery.

At about 750 BC a simple form of writing developed and Greeks colonised the whole Mediterranean area, which of course led to confrontations with other cultures.

The Archaic Period – lasting from about 725 to 500 BC – was the first zenith of Greek culture, bringing developments in architecture, painting and sculpture. In this period the first laws were written down and the Greek polis (independent city-states) developed. The men in power often supported the arts.

During this time the Greek temple was developed. The temples were first built in wood and then later transformed into stone. With the stone buildings also stone decorations like reliefs became possible. These reliefs could show whole battle scenes with many different people and animals and were painted in many colours.

Paintings were still mainly found on vases and other pottery. Instead of geometric patterns vases were now decorated with pictures of plants and mythological figures. The motifs were painted in black glossy clay on a background of lighter clay, which gave this technique the name 'Black Figure Painting'. Details were incised into the black clay. During the Archaic Period the first known murals were also created, probably influenced by traditions of the Greeks' neighbours in Anatolia. Smaller, portable pictures were used as offerings or in funerary rites. In some cases pictures even show the artist's signature.

Sculptures became more and more naturalistic. Monumental sculptures developed from about 650 BC. Mainly made for tombs, the Kouroi (Greek 'kouros' = boy, young man) were large marble statues of naked young men of up to 3.5m high. They are standing up, left foot in front of right, arms hanging down, and have smiling faces without any individual features. In their appearance they are reminiscent of Egyptian paintings2. 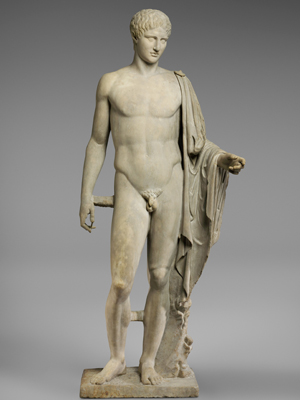 The time from 500-336 BC was the climax of Greek antiquity in all aspects of politics, culture and arts. The 40-year-war against the Persians was won, which resulted in a consolidation of the democratic polis and the rise of Athens to being the political and cultural centre of Greece. Many new buildings were erected during this time in Athens and the Acropolis was completely redesigned. This resulted in a temple building boom all over Greece. The city was ruled by Pericles from 443 to 429 BC; his death brought riots and Sparta defeated Athens in a struggle for supremacy in the area.

This was the time of the philosophers Socrates, Plato and Aristotle. Hippocrates founded his school of medicine, Herodotus became the world's first historian. Aeschylus and Sophocles wrote their great tragedies.

The democratic polis continued to support the arts. More and more sculptures and pictures showed female figures instead of only focusing on the male body. Public and private houses were decorated with elaborate mosaic floors. Greek arts were in high demand all over the Mediterranean and therefore much of it was exported.

During the Classic Period the first artist personalities who influenced a whole style emerged. Polygnotos created large murals in important buildings in Delphi and Athens, showing for instance the Trojan War. Iktinos and Kallikrates built the Parthenon on the Acropolis in Athens. The sculptor Phidias fashioned the 12-metre-tall Zeus statue in Olympia3, Polykleitos crafted bronze statues as well as a description of perfect male proportions and Praxiteles formed numerous marble statues of gods.

Vases were now painted by covering the whole vase in black while leaving out silhouettes of figures, which then appear in the colour of the clay. Details were painted in black rather than being incised into the clay, which allowed more detailed pictures in the so-called 'Red Figure Paintings'. Very realistic pictures were also painted on wooden panels. There was even already a representation of linear perspective, light and shadows and many other things that made paintings more realistic. Even cloth and tapestries were decorated with all kinds of pictures.

The building type of the temple was standardised and further building types like the theatre and the gymnasium were developed.

Sculptors turned away from idealistic shapes and unnatural poses and let their work show more individual features of people as well as more natural body features. They discovered how to depict movement and natural postures of the human body. They developed the 'counterpoise', figures standing with most of their weight on one leg, which has been used in many sculptures ever since4. The first profane statues appeared during this era: hollow bronze sculptures given to Olympic athletes as a prize. Soon there were also statues and portrait heads of important persons to be found in many cities that would serve as examples for all to see.

The Hellenistic Period started with Alexander the Great becoming king of Macedon in 336 BC and lasted until the year 0. During his reign, Alexander the Great created a large empire, influenced by Greek culture. It was a time of great scientists and mathematicians like Archimedes and Euclid.

Arts and architecture became monumental and painters drew the first pictures of landscapes. Arts did not only show pure realism but also tried to create something better than that. Many Greek paintings of this time are known through copies found in Roman houses as well as written sources. Rich people of that time often supported the arts and liked to decorate their own homes with sculptures.

Styles in the Hellenistic period were no longer encompassing all of Greece, but there were many different styles for different genres. In this period the first texts about the older forms of arts (of the Classic Period) were written and their detailed study began, it was therefore the beginning of arts history. Historians tried to show the development to a more realistic style (or even better than realistic) as well as write down biographies of important artists.

The Greeks Inspire All

Greek antiquity ended with the conquest of Athens by the Romans in 86 BC. From then on Rome took over the role of the political and cultural centre in Europe.

Most Greek sculptures were destroyed in later centuries, either because of religious beliefs or simply because the materials were needed for other things. Bronze statues were melted down and made into weapons, marble was ground into mortar and so on. Other statues were taken away by the Romans, who decorated their own homes with them.

The arts of Greek antiquity inspired many later periods. For the first time in the Western world, art was founded on theoretical principles of proportion, composition and trying to be as close to re-creating reality as possible – or even more than that. Greek antiquity even laid the foundation of research in arts history, still influencing historians in the 20th Century.

1Ab urbe condita - Latin meaning 'from the founding of the City' (of Rome).2Egyptian statues also predominantly stand left foot in front of right. This inspired Napoleon to insist that his troops start marching with their left foot, and this has been adapted by armies worldwide today.3One of the Seven Wonders of the World along with The Great Pyramid of Giza, The Hanging Gardens of Babylon, the Temple of Artemis at Ephesus, the Mausoleum at Halicarnassus, the Colossus of Rhodes, and the Pharos Lighthouse at Alexandria.4One of the most famous examples being Michelangelo's statue David.