Early Christian and Byzantine Art - For the New God Content from the guide to life, the universe and everything 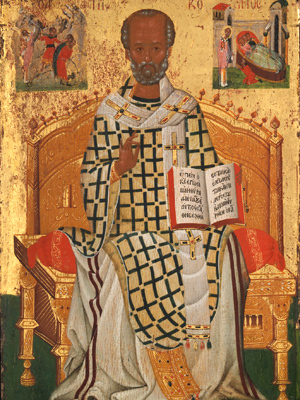 From about the year 50 AD Christianity spread westwards from Palestine, Syria and Asia Minor. The young religion was not compatible with the Roman Empire as Christians did not agree with the cult-like worship of the Emperor. Therefore, even the rather open-minded Romans - who accepted quite a lot when it came to religious beliefs in their Empire - did not agree with Christianity. This resulted in Christians not being particularly welcome in the Empire, but the spread of Christianity could not be stopped.

Around 200 AD the first permanent Christian communities developed in Rome. As Christianity was still a forbidden religion, they met in secret. This happened mostly in the Roman catacombs, burial places that were large systems of underground tunnels located outside the city. The Christian parts of the catacombs were decorated with Christian murals. Art for Christian clients, that served the new religion, was developed from the 2nd Century in Rome.

At first Christians were against the use of any pictures because they wished to set themselves apart from other religions or cults, but since the 2nd Century pictures were used to teach the followers of this new religion about different aspects of Christianity. Early churches were outfitted with marble floors, murals and mosaics depicting Bible scenes as well as decorations made from gold and silver. Every surface was considered to be a canvas. Walls were decorated with pictures, and the architecture or shape of the interior walls was considered less important than the paintings or mosaics on them. These murals and mosaics were not completely new inventions but used older images, like the shepherd or vine leaves, which were already used by Roman artists. They originally symbolised the philanthropic characteristics of the deceased and the Roman god Bacchus, but were used in the Christian context to instead remind people of the Bible. Only the context as well as the combination with crosses and other Christian symbols makes them noticeably Christian. While mosaics were already widely used in Roman Antiquity, the fashion to not only lay them on floors but also to cover entire rooms with them arose in the 4th Century. The mosaics were usually made of small rectangular pieces of glass but stone, gems and metal were also used.

The persecution of Christians was at its peak in the 3rd Century, but in 313 Emperor Constantine allowed everyone to freely practise their religion. In 373 Christianity even became the religion of state. From then on most emperors were Christians and so Jesus was often depicted in the fashion of a Roman emperor: sitting on a throne and wearing a toga, for instance. The classical Roman arts were not lost but were used to serve the new religion. Many small reliefs representing Christian ideas were made in the naturalistic fashion of those found in Ancient Rome, while on the other hand less-naturalistic artworks appeared at the same time. Very often naturalistic details were used in contrast to a very non-classical composition1. Classical works regularly showed lively scenes, often with many people in mid-movement in different layers behind each other; early Christian artworks on the other hand often seem stiffer. Instead of realistic proportions, the size of people could vary with their importance in the depicted scene.

With Christianity becoming the state religion a new canon of visual expressions had to be found. All forms of art known in Roman Antiquity were used for the purpose of the new faith. Naturalistic pictures as well as stylised images were used. The debate about whether God or Jesus should be depicted and how would not end until the 12th Century.

In 410 the Visigoths conquered Rome and in the late 5th Century the last emperor of the Western Roman Empire had to abdicate. Even with the coming of the northern tribes the classical Roman traditions did not find a sudden end; restoring and studying artworks of Roman antiquity was even encouraged. The most important king of the Visigoths, Theoderic I, particularly took care of the Roman monuments. The capital city of his kingdom was Ravenna in north-eastern Italy.

The Eastern Roman Empire conquered many areas that once belonged to the Western Roman Empire in the 6th Century and the Byzantine Empire emerged. It spread from Asia Minor to encompass Greece, most parts of current Italy (including the areas formerly occupied by the Visigoths), northern Africa along the Mediterranean shores, Egyptian territories and southern Spain.

The use of pictures in a religious context was very much debated in Byzantium for a long time. In the early 8th Century almost all uses of religious pictures were even forbidden by law. Some historians claim that existing pictures were destroyed and mosaics as well as sculptures were removed from churches. This time is called iconoclasm2. Churches from this time were decorated not with colourful mosaics but with only simple pictures of the cross. This iconoclasm ended in the mid-9th Century. 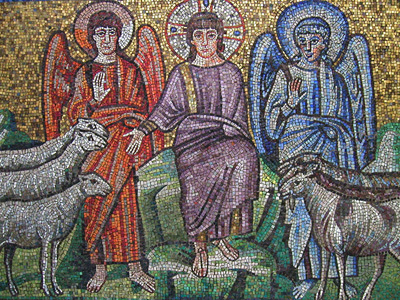 Paintings and mosaics in Byzantium were mainly used to decorate walls. Various figures from the Bible were framed with ornaments of leaves, often with blue or even golden backgrounds. Sometimes all of the surrounding walls were covered with gold.

Depending on the subject, pictures could be quite naturalistic, or very stylised showing strong contours and stiff poses. They were not meant to depict reality but showed a higher truth. In Ravenna, the art of early Christian mosaics was at its peak: a mixture of naturalistic pictures and intricate ornaments cover walls and vaulted ceilings, visually dissolving the walls in shining pictures.

Historical records show that coloured and painted glass was used in church windows from about the 4th Century onwards.

Books (codices) made of parchment were in use since about the 1st Century AD - before that only rolls of papyrus were used, but books were quickly adopted by the Christians because of their advantages in handling and durability. They were also better to paint on - paint was better preserved on flat parchment than on rolled papyrus, as some artists found out some time during the 5th Century in the Byzantine Empire. As the art of illuminating books developed, people in Byzantium found a love for shining gold backgrounds and very fine parchment. Unfortunately the especially smooth parchment often resulted in paint not sticking to it properly.

Most illuminated books contained religious texts, like parts of the Bible. Depending on the use and contents of the books, their covers could be made very elaborately out of ivory or metal, and sometimes decorated with enamel. The text could also be written in silver ink, which turned black over the centuries. Codices were made by monasteries for their own use as well as by different ateliers for various customers.

The pictures in the books were often reminiscent of images from late antiquity, with some showing portraits of prophets or other characters, and others showing whole, lively scenes. Ornamental frames were often painted around pages and pictures. Only very simple sketches were made before the pictures were painted. Very often two pages of illustrations and texts belonged together and formed a greater picture in the opened book.

In Byzantium, sculptures were continually used to decorate the interiors of buildings and also the surfaces of smaller objects. The genre of sculpture was reduced mainly to reliefs made of stone, metal and ivory. No statues were made: they were associated with earlier religions. More three-dimensional works were mostly ornamental capitals of columns - they never appeared on impressively decorated facades as they did in Western Europe.

The Downfall of Byzantium

Civil war, as well as conflicts with other countries, led to the crumbling of the Byzantine Empire. In the late 14th Century little was left of the once-large empire and when Constantinople fell to the Turks in 1453 the last empire of Antiquity came to an end.

Byzantine arts inspired artists of the European Middle ages. Artworks as well as artists were highly sought-after. The fall of the Byzantine Empire led many scholars – artists as well as scientists – to migrate to Italy, where they played a part in the genesis of the Renaissance. Byzantine arts also laid the foundation of Orthodox Christian icon painting and greatly influenced other forms of orthodox arts.

1The composition of an artwork describes how elements are arranged in relation to each other.2From Greek 'eikon' (picture) and 'klasma' (to break).