Early Christian and Byzantine Architecture - from Catacombs to Churches Content from the guide to life, the universe and everything 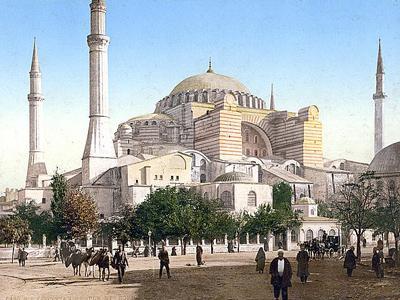 When the first Christian communities developed in the Roman Empire around 200 BC, Christianity was still a forbidden religion. Therefore Christians met in secret, in underground catacombs or in private houses. The catacombs were burial places which were located outside of the Roman city walls. The Christians not only used these underground tunnels as burial places, but also for memorial services and celebrations. The vaulted catacombs were connected by narrow tunnels and steep staircases and often had multiple levels. Catacombs used by richer families were often decorated with murals and mosaics.

When Emperor Constantine made Christianity the new religion of state in 373 AD, new buildings had to be made to serve this religion. While antique temples housed only the image of the gods and were only accessible by priests, Christianity required enough space for the whole community inside their religious buildings. Therefore the shape of antique temples was not ideal for Christianity. Another building type of the Romans served as the archetype of the first Christian churches: the basilica.

Basilicas were long, rectangular buildings with a row of columns creating an aisle on each of the longer sides. The nave in the middle was higher and had a gabled roof while the side aisles had single pitched roofs, their higher sides pointing to the nave. Because of this shape it was possible to have windows in the upper part of the nave as well as in the aisles on the sides and bring more light into the building. There could also be more aisles added symmetrically to the sides. One narrow side of the nave would often end in a half circle – the apse. In Roman times the basilica was used for instance as a market space, court of justice or as a general gathering space.

Until recently, basilicas were the archetype of countless churches. Columns instead of supporting walls inside of the building made it possible to have larger rooms for a larger community of Christians. The whole focal point of the building is the altar and the apse behind it. Often these are slightly raised on a platform that is higher than the larger part of the basilica from where the community watched the priest. This made everything happening at the altar more visible and greatly emphasised the altar's importance. It should be remembered that there were no benches in churches at this time, so the direction in which people looked was not determined by the orientation of furniture.

The oldest Christian church is San Giovanni in Laterano, built on behalf of Emperor Constantine in 313. It is a basilica with 4 aisles (2 on each side of the nave), which are separated from each other by columns which are topped by arches. The nave has arched windows above these arcades. The building was made of bricks with the wooden roof structure showing on the inside. In the apse opposite of the entrance there was a throne for the bishop of Rome (the pope). Today San Giovanni has baroque decorations dating from the 17th Century.

Also built on behalf of Emperor Constantine was St Peter's Basilica, erected on the grave of St Peter. Just like San Giovanni it was a basilica with 4 aisles, but additionally had a transept – an aisle oriented in a 90° angle to the others. This gave the whole church a cross-shaped layout. The columns inside of the church were taken from antique temples. In the 6th Century an atrium with a garden was added in front of the 5 entrances of the church1.

Atriums at the church entrance were common for the early Christian basilicas. They were originally part of Roman villas and not related to religious buildings. The concept of having an enclosed outside space in front of the sacred building can also be found at mosques and is very visible at new St Peter in Rome. Its function is to add an in-between space separating the sacred and the profane.

Often parts of older Roman buildings like columns were re-used in the churches. Windows were usually small, and either open or covered with cloth, thin slices of perforated marble or alabaster. Flat wooden ceilings were used instead of the vaults preferred by the Romans. 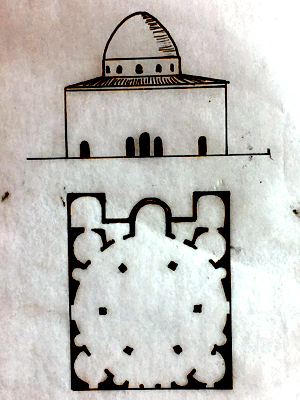 A different kind of Christian buildings derived from the shapes of Roman mausoleums, which were usually rather squat cylindrical buildings. Christians used this shape mainly for chapels and baptisteries. They could be, not only round, but also polygonal, square or cross-shaped, but in all cases had approximately the same length and width. This was a big contrast to the rectangular basilicas. The room with the altar or baptistery in its centre usually had half round niches at the walls. Larger buildings could be encircled by one or more corridors. In central plan churches the priest stood in the middle of the community, while in basilicas he was opposing them.

The halls were usually topped with a dome. However putting the circular dome on a square floor plan was not an easy thing to do. Four rounded triangular wall parts – the pendentives – at the corners of the room made this possible. At these corners columns took over the load of the dome and distributed it to the foundations. In a similar way also octagonal domes could be put on a square floor plan. The cut-off corners of the octagonal would be 'filled' with triangular vaults to connect them with the square room. Often the large central dome was surrounded by smaller half-domes on four sides.

In the interior of the church the central room with the dome usually is two storeys high, with arcades on both floors parting the room from a surrounding corridor and gallery (on the upper floor). The encircling corridor on the lower floor was equal to an aisle of a basilica. Large central plan buildings were erected until the 5th Century, but smaller buildings were prevailing.

The domes could be made lighter by being constructed of hollow clay cylinders instead of bricks. These so-called 'amphorae' looked vaguely like vases where the neck of one vase loosely connected to the bottom of the next. They were arranged in horizontal rings to shape the dome.

Cross-shaped churches had not only one central dome, but also four additional domes: one on each of the crosses' 'arms'. Adding another module with another dome to one end of the cross resulted in the development of a hybrid between basilicas and central plan buildings.

As the Roman Empire was slowly falling apart it was divided into two separate parts: East and West Rome. East Rome's capital was Constantinople and while Germanic tribes conquered much of western Rome, the Eastern Empire – Byzantium - still remained as the last ancient state.

In West Rome basilicas were the preferred building shape but since the 6th Century the prevailing building type in Byzantium was the central plan building. They were very common in Greece, Syria and northern Africa. Due to technological restraints most churches were rather small, cubic and topped by a dome. Sometimes four smaller domes were arranged around the central one. Other parts of the churches were topped by barrel vaults, rounded arches also prevailed and windows were often arranged in pairs or groups of three.

The churches were built either from natural stone or bricks, though sometimes both were combined in horizontal layers. The bricks were often laid in a way that made them serve as ornamental decoration. The interior walls were usually richly decorated with mosaics and paintings of Christian subjects.

The most impressive building of Byzantium is certainly the Hagia Sophia. At first a basilica of the same name stood in its place. After this church burnt down, Emperor Justinian built his new palace church in its place. The Hagia Sophia is built up of multiple domes covering a square floor plan. The huge central dome is carried not only by columns. The large horizontal forces make further enforcements on the outside of the building necessary. On two sides they are taken by two slightly smaller half domes which themselves are again enforced by even smaller half domes. Therefore the central hall of the church is not square anymore but an oval shape.

From Domes to Onions

While the Byzantine Empire came to an end in the 14th Century, its architecture lived on. Via Armenia and Georgia Byzantine architecture reached Russia in the 11th Century. Here it developed to the typical Russian church design. They are built on a floor plan of a Greek cross2, but with additional rooms filling the space between the arms of the cross. This makes the floor plan in fact rather square. A large dome sits on the centre of the cross and four domes on small towers on each arm; sometimes there are even up to 12 domes of different sizes. The domes changed to the typical onion shapes. These domes have a wide, round base and a relatively short, pointed top. While they can be found in many countries, Russian versions are especially intriguing, due to their many colours or even tiles laid in patterns.

Architecture in Western Europe proceeded to develop to a completely different direction– but it was not completely uninfluenced by the innovations of Byzantine architecture.

Photograph courtesy of the Library of Congress.

1Due to its bad condition Old St Peter's was torn down in the Renaissance age and rebuilt in the fashion of this time.2A Greek cross has four arms that all have the same length and are arranged at right angles.