Quick Tips for Western Tourists in Moscow Content from the guide to life, the universe and everything 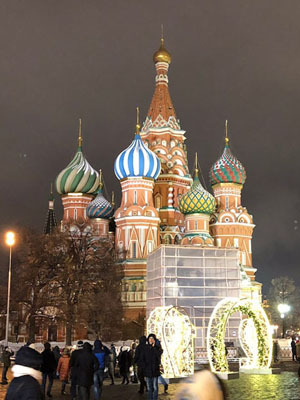 Moscow is an amazing city. According to one Researcher who lived there for two years 'it gives you much more than you ever believed it would'. The society and general culture provide a fascinatingly alternative spin on Western lifestyles. So well done, you've selected a truly fascinating city for your visit, and if you bear the following things in mind, you should get more from your trip than just a set of Matroshka dolls and a huge hole in your bank account.

This is invaluable for getting around on the fantastic Metro (their version of the Underground). Just a few minutes learning will save you ages in trying to work out destinations. Russian is very complicated, so a smattering of words and phrases is really not enough to communicate at any useful level. Don't bother unless you're going to be there for a few weeks or months. But if you want to explore Moscow independently, with its inherent tourist prices, you will need to learn the language. Though 'Spass-ee-ba' (thank you) and 'Pah-zhal-oo-sta' (please) will get you a smile that says 'thanks for trying' from some, you'll only get stares burning with suspicion from others. But do not expect Russians to speak anything other than Russian. Many do speak English but they are never around when you need them. Generally, as in most European countries, the younger generation are happy to speak English. So if you are having trouble or need to ask for directions or help, try approaching someone in their 20s!

As a Westerner, the quality and style of your clothes would once have marked you out instantly as a non-resident. This isn't true any more, not for Moscow anyway. The Muscovites you see in the city, especially the younger ones, are trendy and a lot more stylishly dressed than their Western counterparts! Some guide books will warn you, for instance, not to wear bright colours. Again, this is not relevant any more. The kind of attire that marks you out as a tourist is the kind of attire that marks you out in any city in the world: all-weather hiking jacket, bum-bag etc.

Abandon any ideas of buying a Shapka (the classic Russian fur hat) in order to appear inconspicuous. This will have exactly the opposite effect. Not least because the ones they sell to tourists for $20 are made from inferior fur which all self-respecting Russians sneer at. Generally speaking, if you were thinking about buying clothes: don't! The centre of Moscow has more French, Italian and expensive fashion houses than the whole of Paris, and the prices in these shops are a tourist attraction! Outside the centre shops are different and have different prices. Take a Moscow guide if you want to find these shops.

Prices in Western-style restaurants are usually vastly inflated, and quality varies dramatically. Generally, the centre of Moscow is a great place to eat. Prices for a meal vary between $15 and $100; a reasonable average restaurant will cost you $20 for salad, a litre of beer and a main course.

For a cheap fill-up, pop into a 'Russky Bistro'. You can find these on most streets in the centre of Moscow - the logo is a bearded bloke in a Shapka. Their pies and beer cost a few pence. Plus there's plenty of authentic local colour to check out while you eat. Do not enter a restaurant with lots of black Mercedes or BMWs parked in front of it! Quite apart from the issues of how the clientele might have earned their money, these are usually the restaurants with the astronomical prices.

Russian police get paid almost nothing. If you break a 'law' (often made up on the spot), they will almost always fine you. It's usual to find some problem with your passport/visa/registration. This is done to make you panic. They ask for an outrageous sum of money. That's your cue to haggle - hope you learned your numbers! Offer them a maximum of 500 roubles. This will make them go away. Don't believe your intrinsic innocence will ensure that the forces of justice will win the day. Pay the money and get on with your holiday.

Do bear in mind, though, that the police do actually have the right to demand documents from anyone on the street, and that you are required to carry these documents at all times. You must always have a passport and a registration (from the hotel or the local police if you rent an apartment). One of the common reasons for getting fined is therefore not carrying them. And, of course, it's important to remember that not all policemen target tourists as an easy source of income - they are equally as likely to wave you on as soon as they see your passport.

Despite the prevalence of cheap alcohol, particularly vodka, public drunkenness is frowned upon. Old women will spit on you and the cops will stop you and fine you (as above). Tipsy is allowed, but if you've got to get off your face, do it behind the closed doors of your hotel room.

Muscovites might seem like a surly bunch, seen in transit on the Metro or jockeying for position in shops1. This is not true. If you are lucky enough to make friends with any Muscovites, you will experience fantastic hospitality and gain a friend for life. But don't expect them to fall at your feet because you are Western (that especially goes out to the fellas). Muscovites are very proud of their city, their country and their traditions. And a friendly guide is an invaluable source of information.

Moscow's reputation as a crime capital peopled by shady Mafia types is unfair. Undoubtedly they are present, but you won't come into contact with them unless you're very unlucky. There are two sorts of criminals in Moscow: the type that doesn't bother with sums less than $10,000 and the clumsy type that are bound to go hungry, and try for sums of hundreds of roubles. This class of Moscow criminal is probably the clumsiest in Europe. You can, of course, help them by waving large amounts of money in public places, or by leaving your wallet, camera or other valuables, in your coat while you're elsewhere.

Dollars can probably get you anything you require. But it's illegal to pay with foreign currency. Some prices in touristy shops are given in 'units', usually meaning dollar or euro equivalents, but you pay with roubles. Trying to bribe someone with dollars is unnecessary and risky. A few hundred roubles or a bottle of vodka will do just as well. Your biggest problem will be avoiding paying over the odds for everything. This cannot be done unless you speak some Russian and know your way around the city quite well. You'll just have to budget for it.

Don't take more than $100 cash into the country. Every second metro station has a teller machine where you can withdraw money from your own account. Every (Moscow) hotel accepts credit cards and most restaurants do as well. The customs laws regarding money/souvenirs allow foreigners to take very little cash out of the country, unless they have a spravka saying that they brought the money with them in the first place. So if for some reason you are relying on cash rather than travellers' cheques or a credit card, it's important to go though the red channel on your way in and get said document stamped.

More importantly, if you buy anything over 50 years old then you need to have a spravka to take it out of the country. Owing to the fact that the customs men quite rightly point out that they are not art experts, they sometimes have a tendency to disallow anything arty through clearance at all. Marching up to the barrier with a big framed picture wrapped in black plastic is guaranteed to get you stopped. The point is to think before you buy.

1The classic Aeroflot slogan was something like 'we are serious making you happy [sic]'. This probably holds true for most Russian shop and restaurant personnel. Do not expect anyone in a restaurant to smile, except possibly the Western-trained staff.2A spiked or drugged drink - either way, much more than you bargained for and you'll be senseless before you know it.